Eumenes 2 vs Antigonas 0 part one

I ran the battle of Paraetacene at the South Bay Game Club and the Miniature Wargaming Society of Sacramento meetings this past weekend using Scutarii from Hoplite Research.  Paraitacene is the battle chosen for the Society of Ancients 2018 Battle Day.  In both actions the Silver Shields were the ones who brought victory for Eumenes.   Phalangites are from Rapier.  Elephants and other figures are from Irregular, Baccus, Rapier, and Heroics and Ros.

The first round was at the South Bay Game Club on Saturday.   The second round can be viewed at  http://18clovehamhock.blogspot.com/2018/04/eumenes-2-vs-antigonas-0-round-2.html  Order of battle for both sides is listed in part 2.  Scott commanded the Eumenid right wing.  Robert was Eumenes and commanded his bodyguard and the phalanx.   Manny was the Eumenid left wing commander.   On the Antigonid side Kent commanded the right wing,  John the left wing, Greg had the phalanx, and Bill had the mercenaries and Lycians.

{Each turn in Scutarii is 15 minutes.   Normally troops move at a reduced speed in order to maintain formation.   By staying far enough away their cavalry was able to move at the walk/trot rate of a horse (4 to 6 mph) and move 2000 paces (one mile/1.5km).}

The Euminids reacted by shifting part of their cavalry from their left wing to their right.   This would take them two turns as they had to move more than one mile to reach the other end of their battle line.  The Antigonids intended to hold back their infantry center and advance to contact with their right wing cavalry and elephants.

The commander of Eumene's right wing moved his cavalry to counter the Antigonid horse.  The elephants,  light infantry, and phalanx advanced to engage the opposing infantry.   (Eumenes had 18,000 light infantry.   Their disposition during the battle is not mentioned.  About 6000 of them would be escorting the elephants.   If the other 12,000 had been with the elephants they would have formed a solid close order line.   Instead for the re-fight they were placed to the right of the phalanx in a similar fashion to what the Seleucids did at Raphia with their light troops.  In this case they were backing up the elephants in the center and on the right.)

In the center Eumene's elephants engaged the mercenaries and Lycians while Eumene's phalanx advanced to engage the opposing phalanx.   At first the pantipodoi  withstood the impact of the Silver Shields, but then one units morale faltered and then broke.  This caused the other units of pantipodoi to flee and Antigonos army fled.  (Gary had extremely bad die rolls when he made the morale checks for the other pantipodoi units due to the one unit routing.   At this point the Antigonid players conceded the battle as morale checks for the Lycians and mercenaries would probably have resulted in additional routs.   Though the Macedonians held the large hole in the center of the Antigonid battle line would have allowed the Argyraspids and Hypaspists to envelop the remaining infantry.)

Eumenes had won the battle losing about 500 men.   Antigona's had over 10,000 men routing at the end of the battle with possibly more joining the rout.  Photos of the game follow. 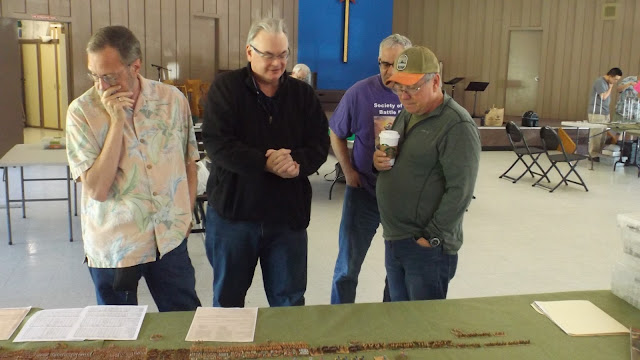 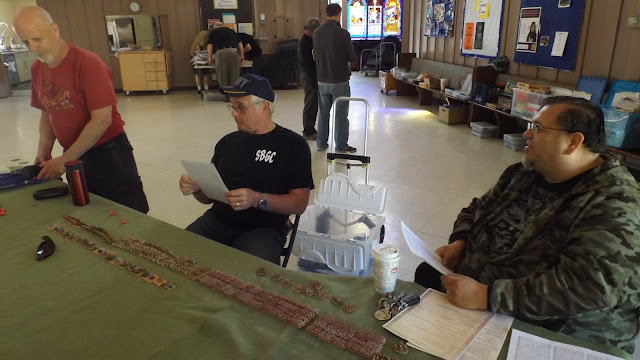 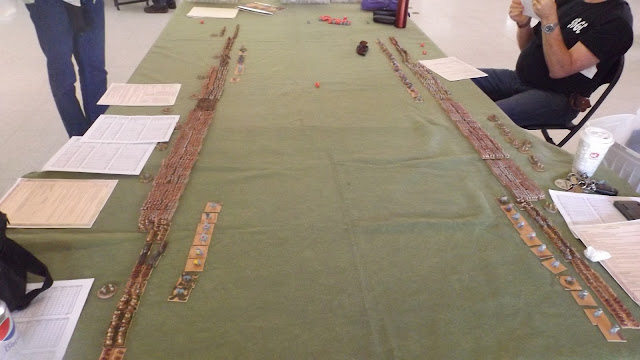 The armies deployed.  Viewed from the hills 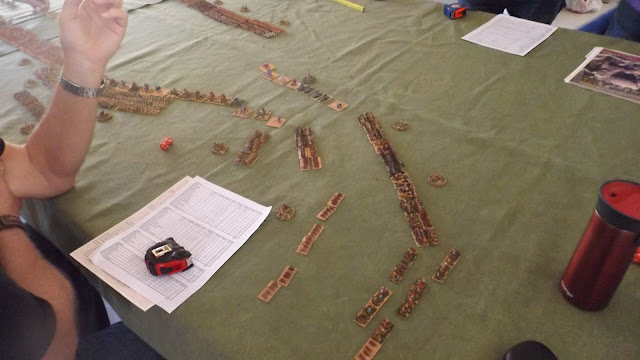 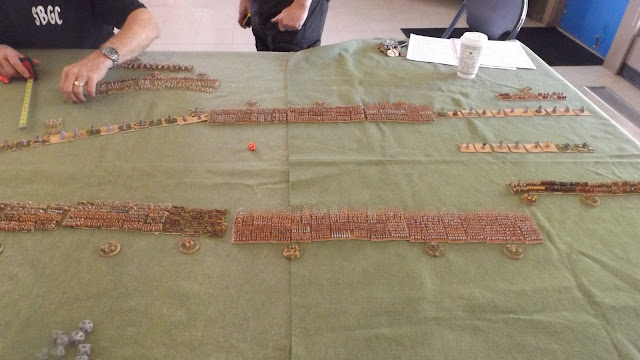 View from behind the Antigonid army 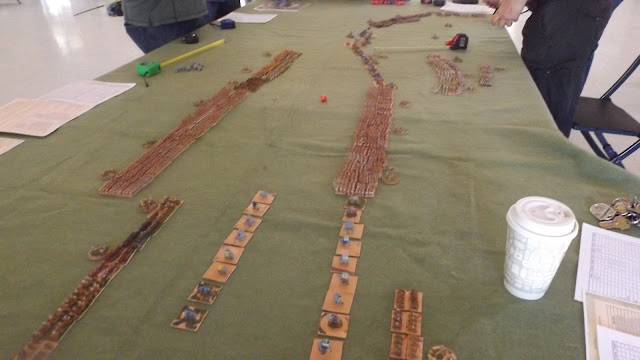 End of turn one.  View from the hills 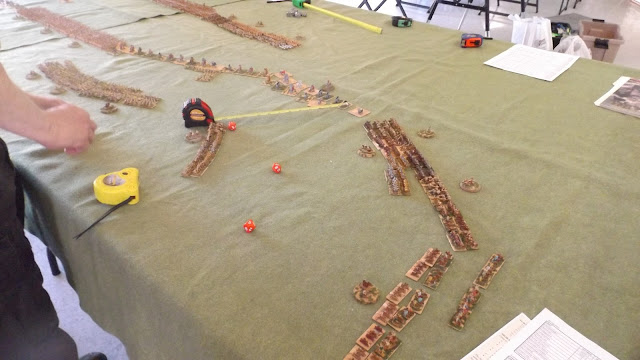 The cavalry engage on the other flank. 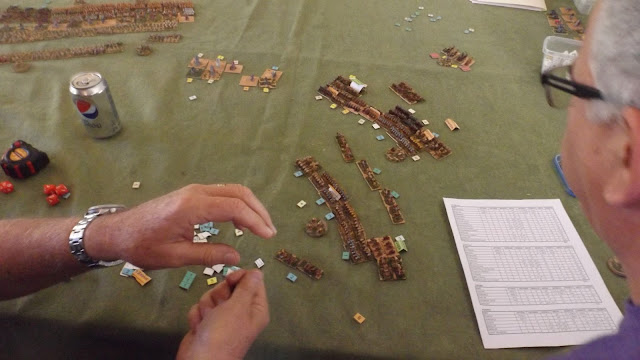 Fierce fighting that would lead to several units of Eumene's cavalry breaking. 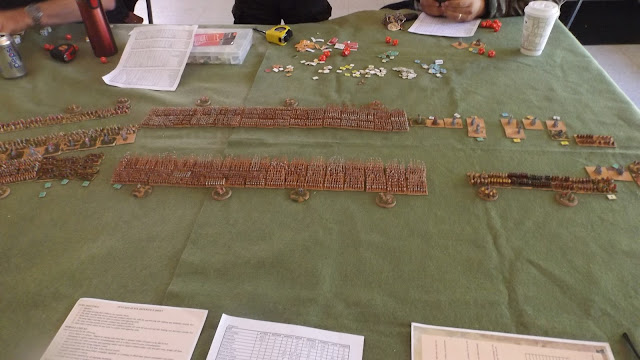 The opposing phalanxes advance.  View from behind Antigonos' line. 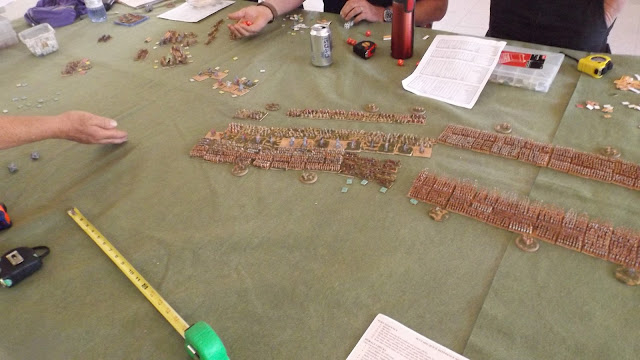 Mercenaries and Lycians engage the elephants supported by light infantry. 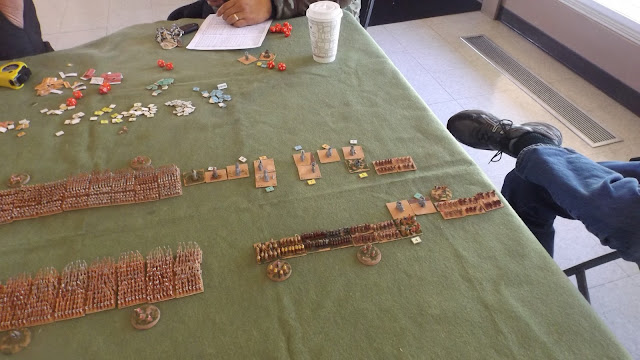 Inconclusive fighting on the flank by the hills 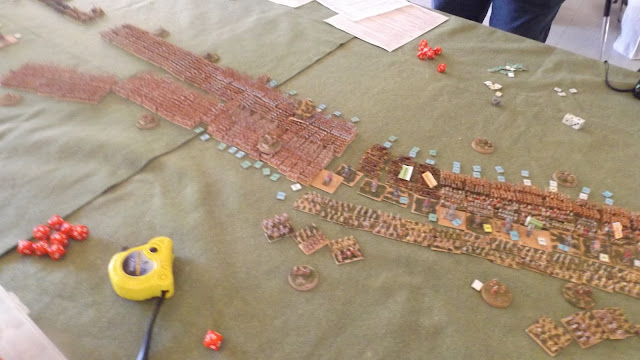 The opposing phalanxes make contact as Eumene's holds back the Pantipodoi 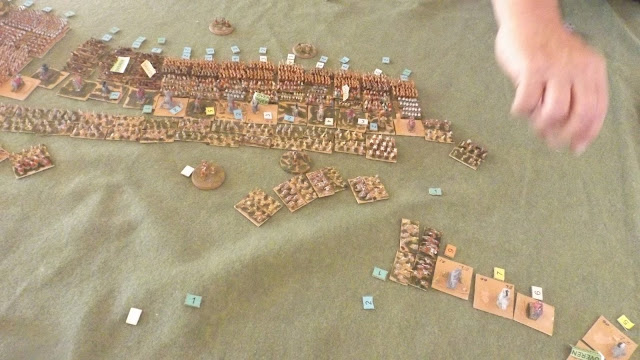 The mercenaries and elephants exchange blows. 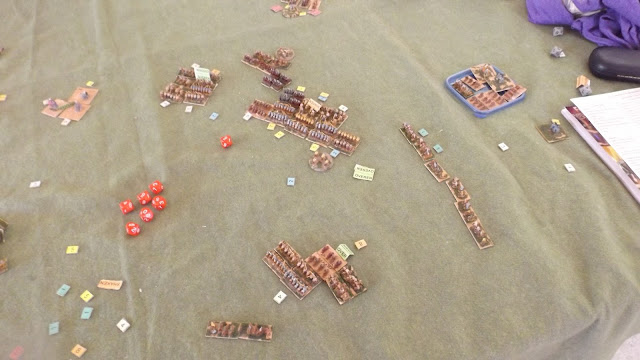 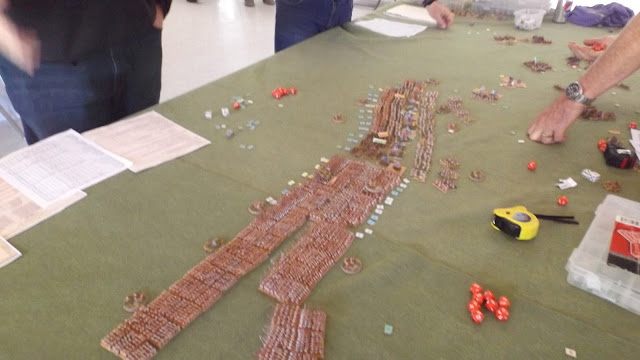 The Argyraspids and Hypaspists engage the opposing pantipodoi.  The pantipodoi caused a few more casualties than they received, but one units resolve faltered as it became shaken. 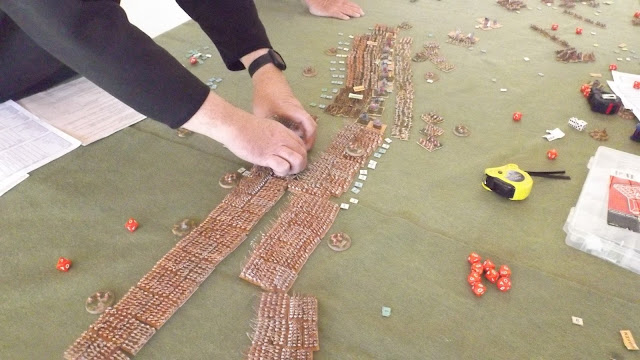 The following turn the shaken unit broke and Greg had a very unlucky series of die rolls as he checked morale for the rout, making five out of seven checks with the worst possible die roll. 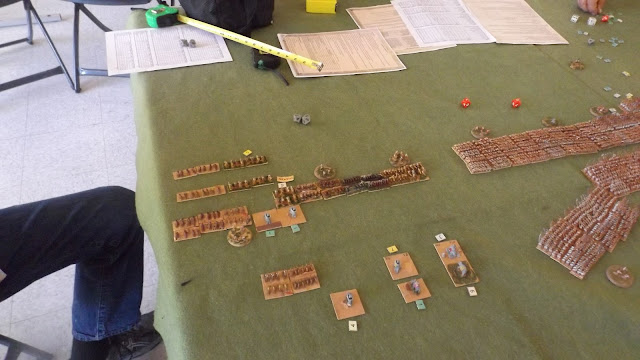 The battle on the flank by the hills remained deadlocked. 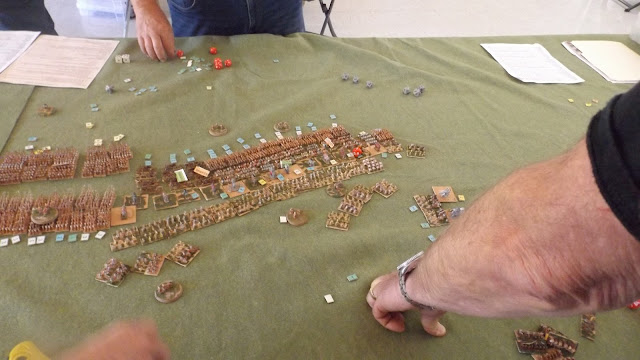 The Lycians and mercenaries have been battered by the elephants and their morale checks for the routing pantipodoi would have led to most of them fleeing also. 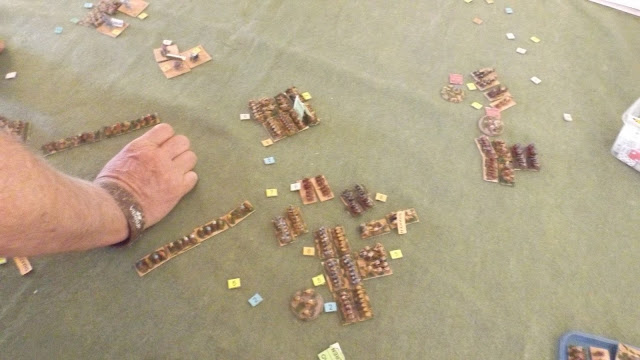 The cavalry battle on the other flank was still in a state of flux.

Impressive! Masses of minis and a lot of action. I shall have to look into Scutarii.
Thanks for posting.
Chris