The Battle of Santa Clara

At the March meeting of the SBGC I ran  OPFOR  the modern warfare supplement for PanzerKorps from Hoplite Research.  Manny Granillo commanded the 7th Brigade of the Peoples Democratic Republic of Cucaracha army, consisting of one T90 battalion, two BMP2 batalions, two BTR battalions, and one SP122mm artillery battalion.   Greg commanded the German Brigade of the Federal Union of Buena Vista consisting of two Puma battalions, one Leopard 2A6 battalion, and one SP155 battalion.

The La Cucaracha infantry battalions each had a 120 mortar battery attached.  The brigade also had three ATGM companies,  two recon companies and three FOs available for attachment to any battalion.   The La Cucaracha brigade was rated as reservists.  The commander was rated as career.  Each battalion received one decorated leader and two decorated leaders were kept at brigade level.

The game was played at one centimeter = 100 meters instead of the one inch = 100 meters scale on page 6.  Direct fire ranges were adjusted accordingly and converted to inches.   Movement was kept at the full amount of inches per turn instead of reducing to centimeters.   The battlefield was six feet square.  This converts to an 18km by 18km area.  The companies are based on 50mm(two inch) wide bases. At this scale a battalion could cover and defend a 5km wide zone as mentioned in several cold war documents. 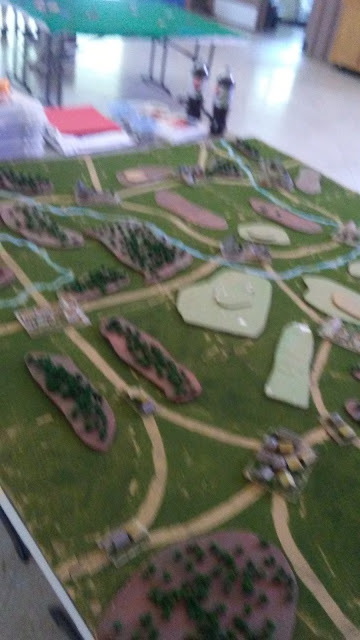 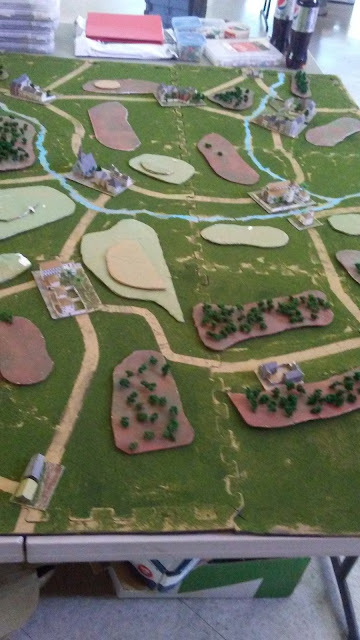 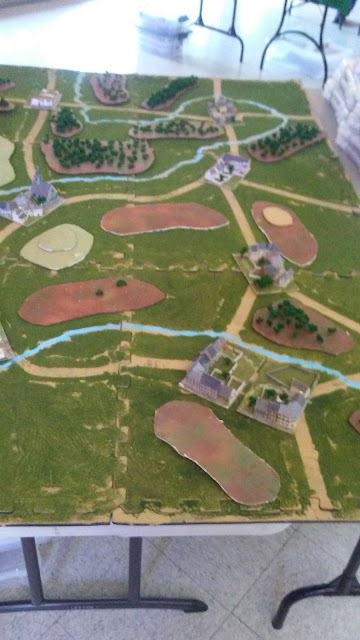 Several views of the battlefield.  The buildings are from PaperTerrain.
﻿
﻿
Greg won the initiative for the first day segment and rolled for four turns.  His battalions entered in three separate zones.  Manny chose to enter in two road columns on the left half of his edge.  The opposing forces were unable to see each other until the fourth turn of the first day segment.  The Buena Vistans made use of cover preventing them from being seen, but were able to see the advancing La Cucarach forces and opened fire with the two infantry battalions at long range causing minor damage.   The Buena Vista tank battalion bogged down and did not advance for two turns due to low activation die rolls.   The Buena Vista army had a +1 die modifier for the decorated leader, but a -3 modifier for only having four battalions. 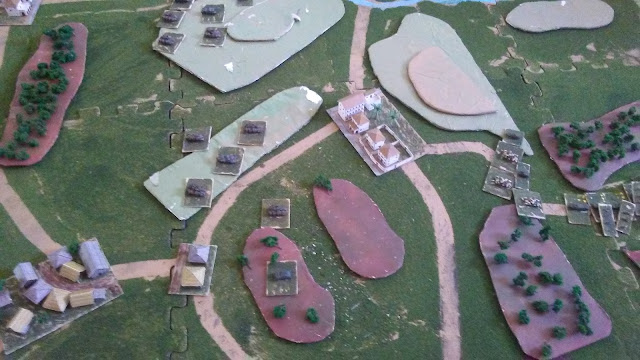 Towards the end of the first day segment.  Buena Vista on the left.  La Cucaracha on the right. 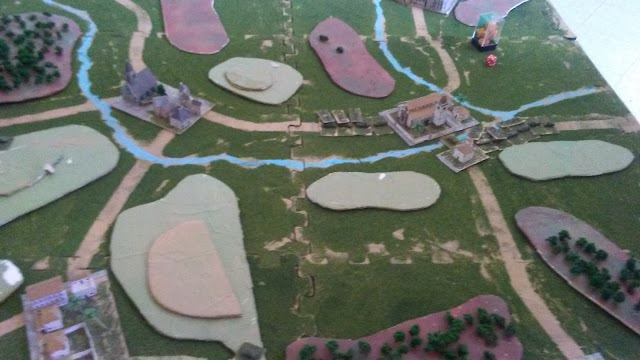 Greg again won the initiative for the second day segment and rolled for three turns.   He immediately brought his artillery down on the two La Cucaracha infantry battalions near the middle of the table.  His middle infantry battalion advanced to the central town, while his right flank infantry battalion exchanged fire with the La Cucaracha tank battalion.   Almost every time Greg fired with the infantry battalion he would roll a one on the attack die.   What allowed his battalion to cause damage were the modifiers for the attachments.   These were +2 for the Leopard company +1 for the mortar company, +2 for the ATGM company, +1 for the Puma weapon modifier, and +2 for being equipped with ATGMs.   There was also a +1 for being at short range.  This was reduced by -2 for the T90 defense factor. 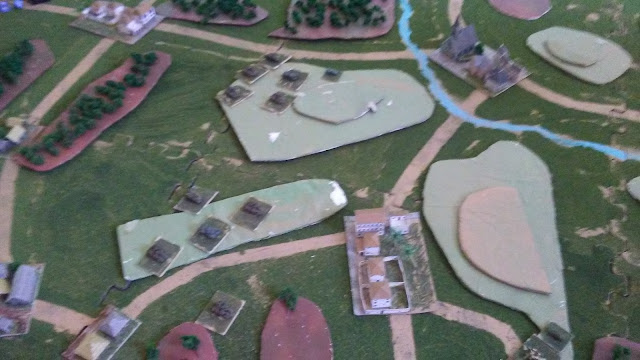 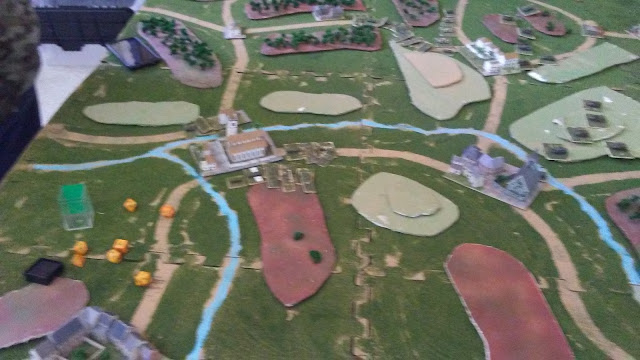 Fighting intensifies.  The two La Cucaracha infantry battalions on the left would come under artillery fire during the second day segment when east (right of the town on the left.

Manny won the initiative for the third day segment and rolled for two turns.   He had brought the two left flank infantry battalion up on the hill overlooking the central town during the previous day segment.  Greg had also moved his central infantry battalion up on the hill and the Leopard battalion in front of the town on the previous turn.   Manny called in his artillery on the infantry at the hill and forced them to fall back, losing one decorated leader and the recon company.  The fire from the Leopard battalion was devastating to the two infantry battalions that were caught in the artillery blast zone.   Other than the one turn where one of them had advanced towards the town, they spent six turns within the artillery blast zone.   The Leopard battalion had the following modifiers to its die roll.  -2 for being only two companies, +4 to its fire die, +1 for each for each of the two Puma companies, +2 for ATGM on the Pumas, +1 for the recon company, and +1 for superior weapon. 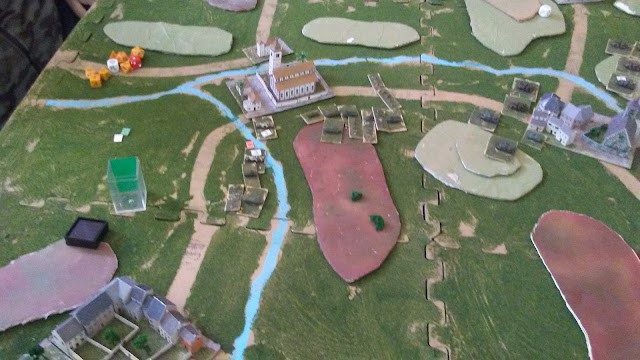 Miniatures are from GHQ.  Buildings are from PaperTerrain.  Trees are from an Ebay dealer.  Battlefield is two foot square interlocking rubber tiles

The battle started about 11:00 as several of the club members had brought items for sale, trade or for free.   Thanks to Lawrence for giving me a copy of Vis Bellica.   We finished about 1:15.  This was an average of one turn every 15 minutes.  Using the 1cm = 100 meters scale, while keeping the full normal move resulted in a more dynamic and quick moving game.   The opposing forces were able to maneuver without becoming completely bogged down in a linear slugging match.  Force density was also about the same as that of the Second Armored Divisions attack on the Medina Division during the First Gulf War.   For those who may be interested in reading about the First Gulf War there is a free book from the army center with maps of the battles at Jayhawks  The Second Armored attacked the Medina division on a 30 km front (a ten foot wide table at 1cm = 100 meters)