We did a playtest of 5Core Brigade Commander at the January Miniature Wargaming Society of Sacramento meeting.   Gary, Hal, Keith, and Rob took part in the game.   Both sides had twelve tank companies and twelve mechanized infantry companies.   We did make a few modifications to the rules for the game.   Ground scale was altered to 1 cm = 100 meters from the 1 inch = 100 meters, a dismountable infantry base was added to the IFV base allowing the infantry to dismount to occupy terrain while the IFVs moved in support,  and a pair of dice was used for activation instead of the single 6 sided die.   This was done to cut down on the frequency of scurry or firefight turns.   If the dice matched and were even then it was a firefight and if they matched and were odd it was a scurry.   Otherwise the total of the two dice was added to three and that was the number of company sized formations that the player could move.   Each player rolled for their own command and had twelve companies.

Another modification we made was to the activation rules.  Normally only one third of the units are activated per turn with a minimum of three.  We changed that to 3 plus the total of the two dice rolled at the start of each turn.

We did not use any of the attachment rules.   These are smaller than company sized formations that are added to a company base providing enhancements such a s Recon, Engineer, AA, etc.

Overall the game played faster than other rules we have used and reached a conclusion.  Discussion after the game suggested changing the activation rolls to only a matching pair of ones for a scurry turn, and a matching pair of sixes for a firefight.   It was felt that scurry turns happened with too much frequency.

There are a number of problems with the ground and unit scales and weapons ranges.   The rules state that  one inch  = 100 meters and troops should be based on 3 inch stands though the basing is contradicted later in the rules.  The problem with this is that the minimum frontage for a company is 500 meters or more.  This would be a five inch base.   Since my models are mounted on 5cm bases the ground scale was altered to 1cm = 100 meters.   Movement and weapons ranges were left as they were in the rules.   This fixed a problem with the weapon ranges.   In the rules the normal range for a tank gun is 12 inches with an extended range of 18 inches for advanced sights.   This would only be 1200 meters and 1800 meters respectively.  This would be fine for World War 2, but not for contemporary tanks with ranges in excess of 3 kilometers.   Changing the ground scale resulted in a normal range of 3000 meters and an extended range of 4500 meters.

Another problem is the artillery rules and terms.   The author uses "packets" for small amounts of indirect fire weapons attached to companies, but does not define the term.  Depending on army and organization this could be anywhere from 2 to 6 or more indirect fire weapons.  An example is given of a Soviet artillery battalion being broken up and a battery attached to an infantry or tank company.  The other term is the stonk.   The problem with this term is that the number of batteries that compose a stonk is not defined.   Packets fire a single suppression die, while stonks use a kill and two suppression dice.   The question is - are all three batteries in an off table battalion used together to create a single stonk or does each battery fire its own stonk?  There are other problems with the indirect fire rules that do not take into account the capabilities of some nations to direct a lot of accurate fire from multiple battalions of artillery or the inability of others to direct more than a single battery.

I don't know if we will use these rules again.   We still have a couple more sets of rules to try.  These are FFT3 and OPFOR.

We played the game on the 2x2 rubber mats that I got from Amazon.  I have finished painting and texturing half of them.  I put the road in the center of each edge and offset the water ways by 4 inches.   This was done to allow the water ways to avoid straight lines and 90 degree forks.  This also allows a greater variety of forks than placing the rivers in the middle of each edge.

Below are some pictures from the game. 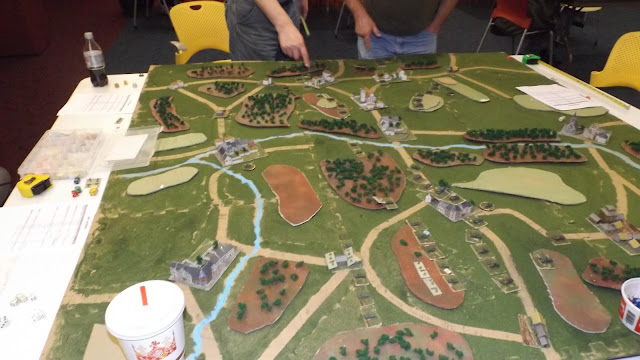 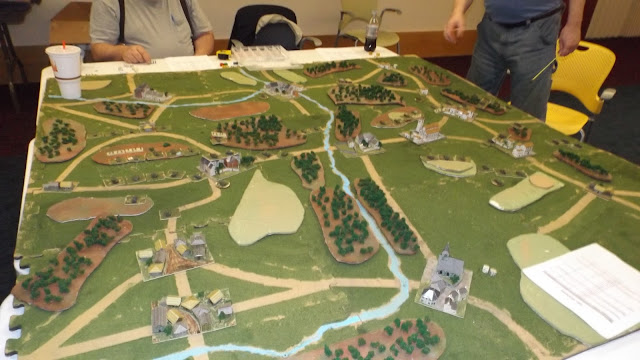 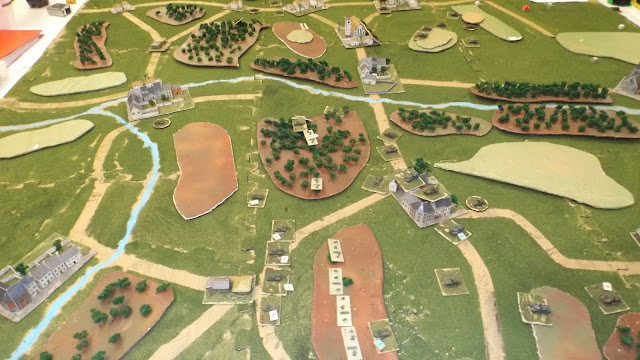 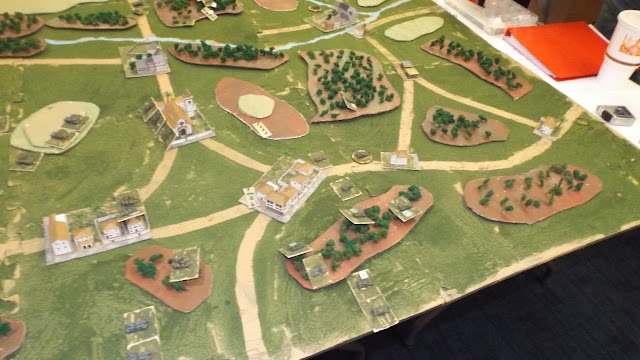 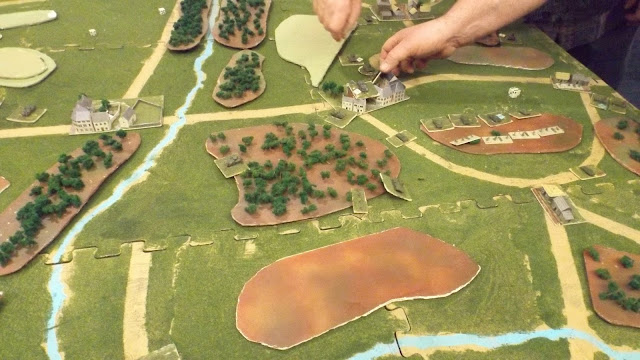 Action between Keith and Hal. 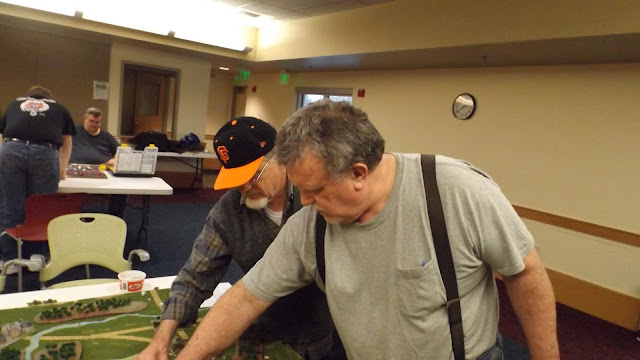 Keith, in front, and Hal 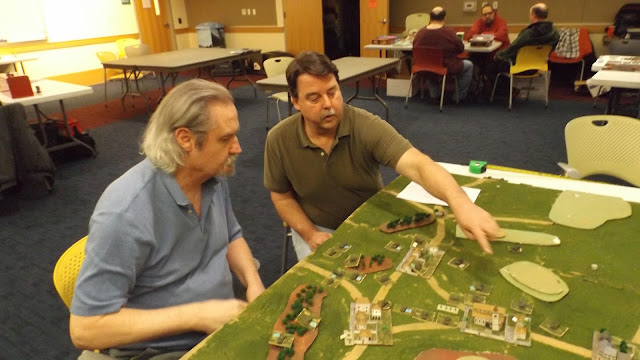 Gary, on the left, and Rob 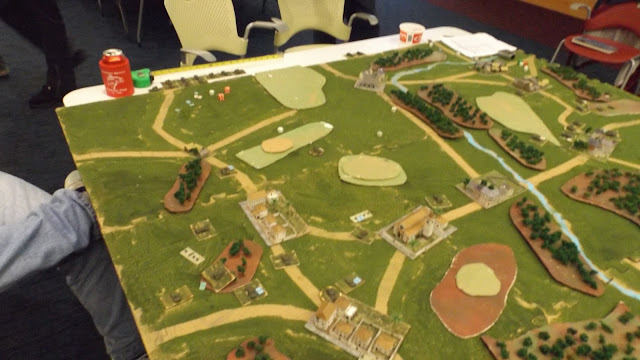 Action between Gary and Rob
﻿
﻿
Posted by William Butler at 5:32 PM