The forces of Antiochus III and Ptolemy IV Philopater met near the town of Raphia to determine who would control Cole Syria.   While Antiochus followed normal Hellenistic practice by placing his best troops on the right of his army, Ptolemy choose to do the opposite and placed his best troops on his left. 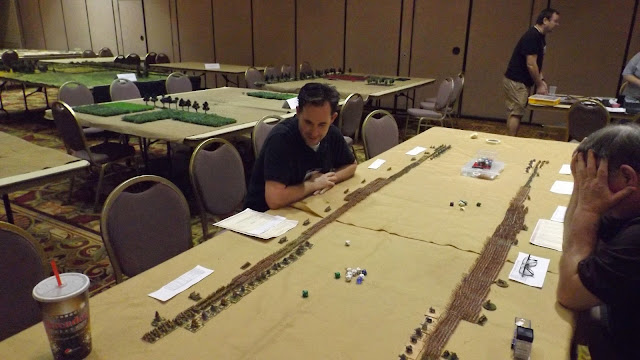 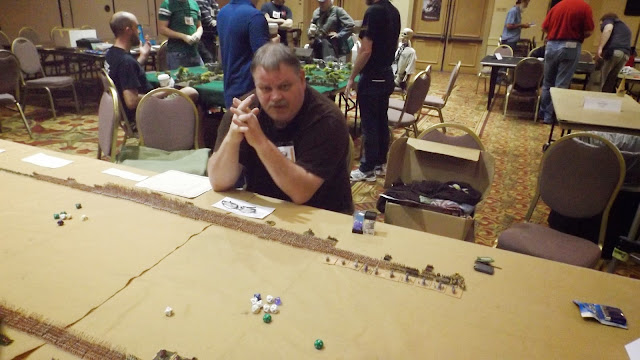 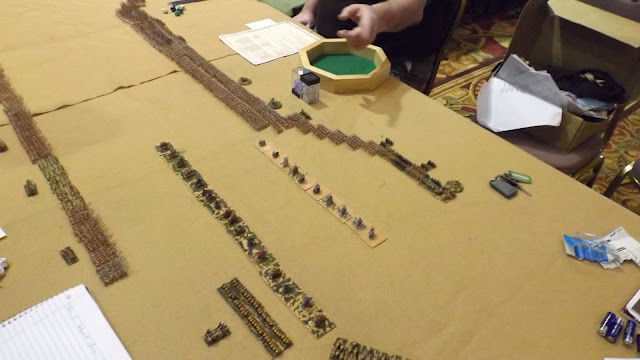 Stuart was to win the initiative for the first four turns of the battle and chose to have Bill move his army first on turn one of the battle.   Bill chose to refuse both flanks and advanced his center in echelon towards the opposing army.  He moved his elephants forward to delay the flanking forces of the Seleucids. 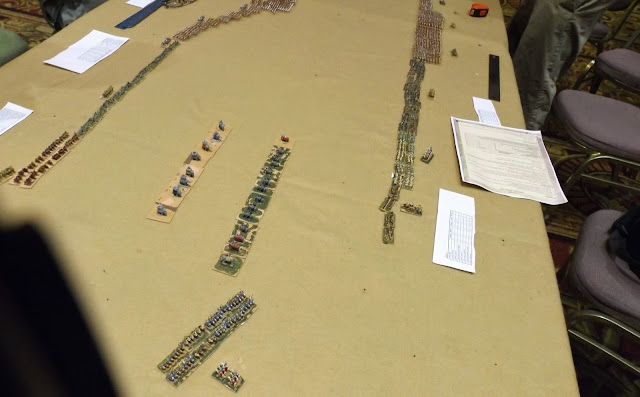 Stuart held his infantry in place as its overall quality and fighting ability was not as good as the opposing infantry.  He moved his cavalry off to the flanks to go around the elephants. 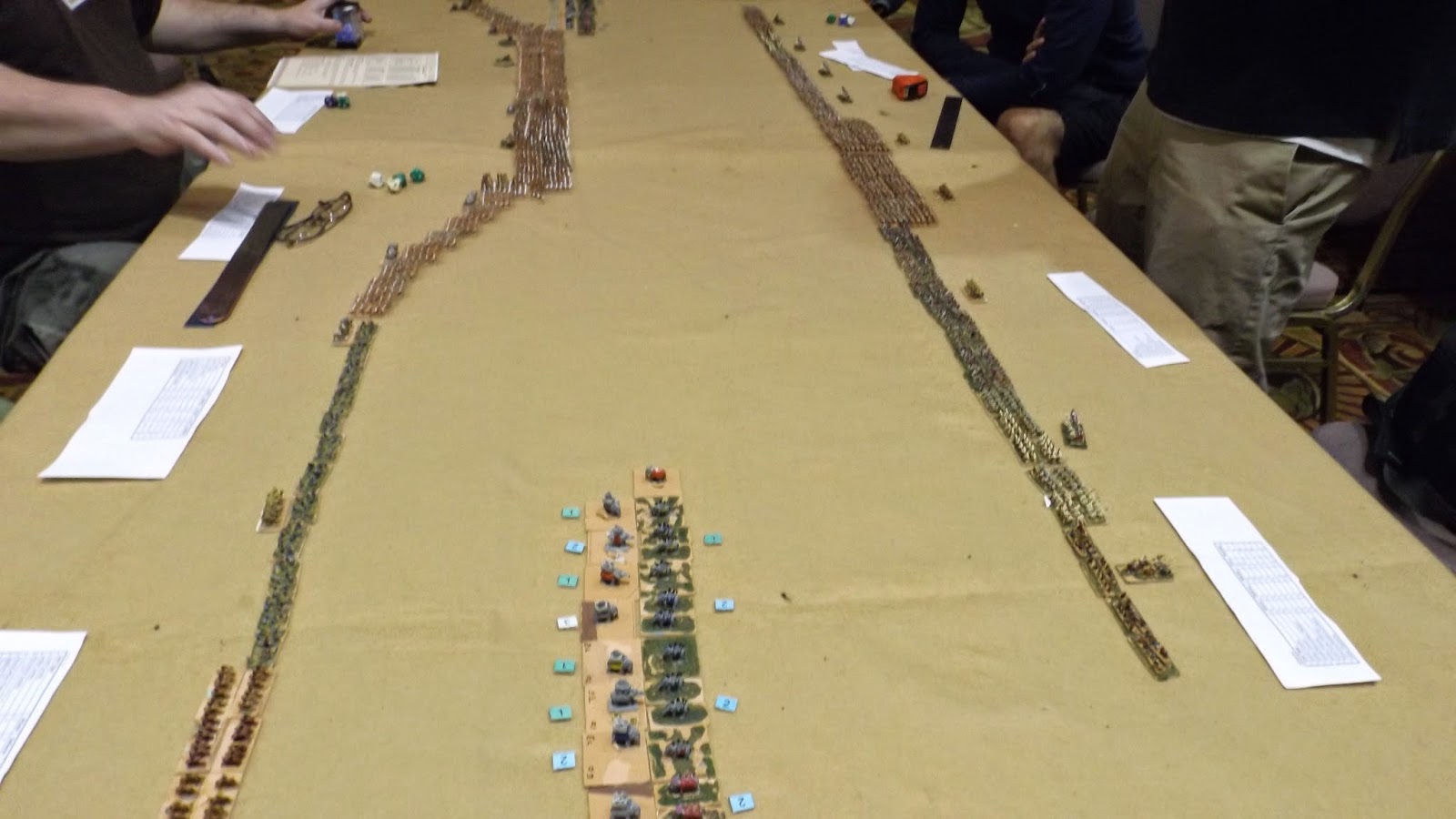 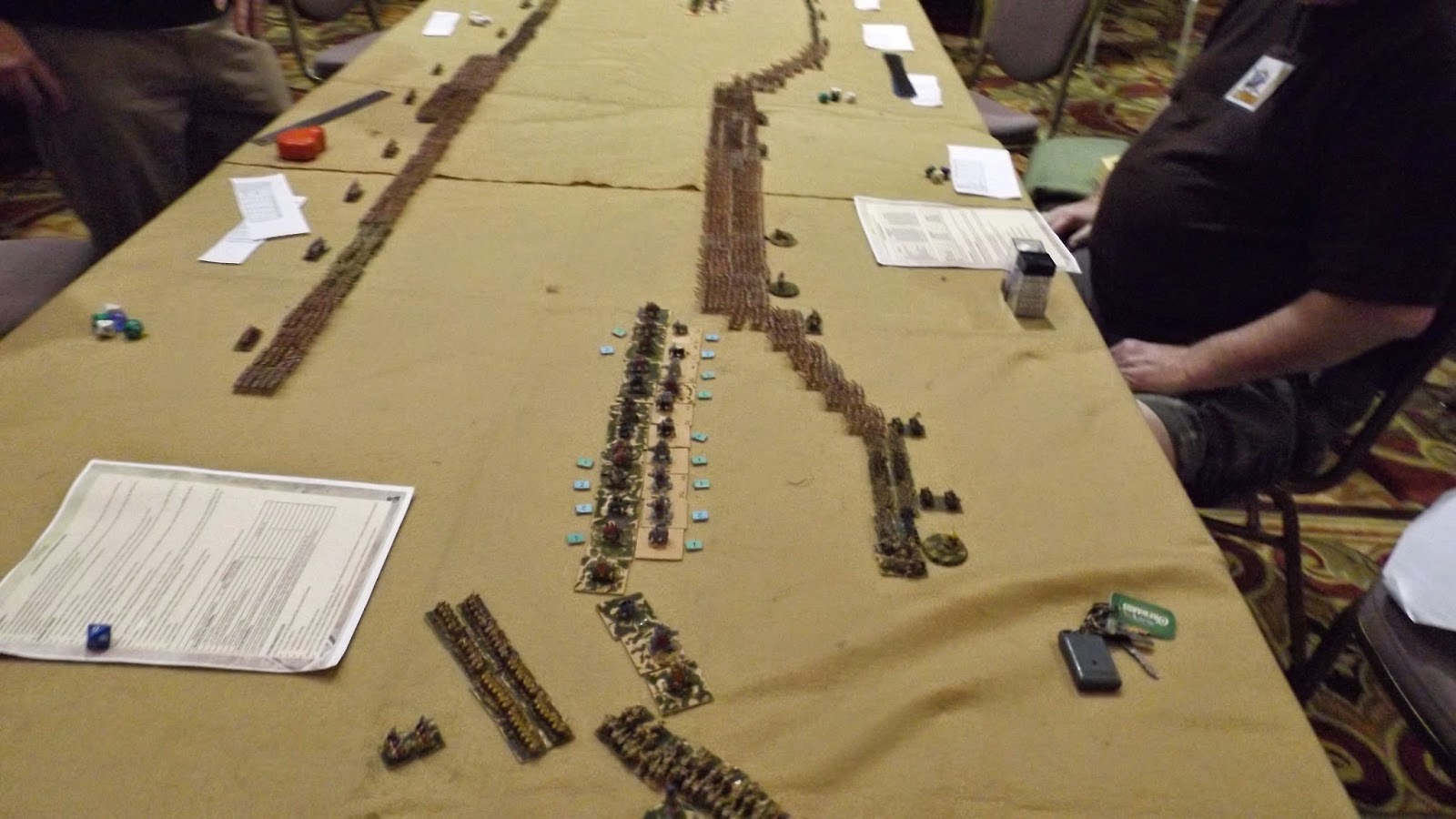 On turn two Stuart chose to move first and his elephants engaged their opposites.  His cavalry continued its sweeping movement around the flanks.  Bill continued to advance his infantry in echelon and adjusted his cavalry to face the flanking movements of Stuart. 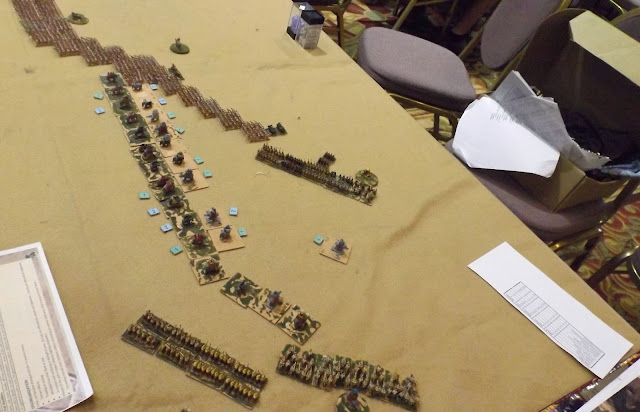 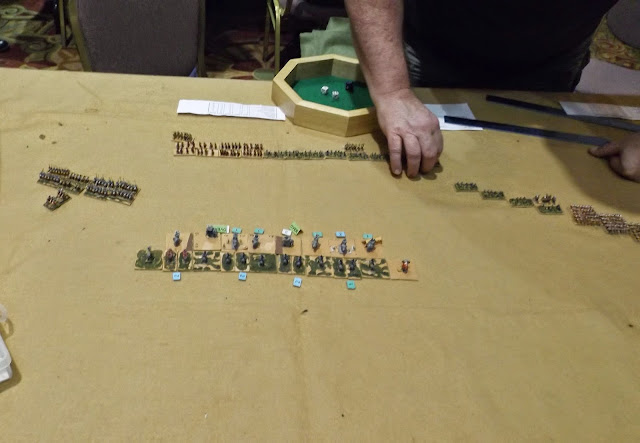 The Seleucid elephants were able to wear down the smaller African elephants of Ptolemy, eventually causing most of them to flee.   This was to be a mixed blessing as the fleeing elephants prevented the Seleucid cavalry from engaging Ptolemy's cavalry.  A few Seleucid elephants also decided that they had had enough and fled back towards their infantry. 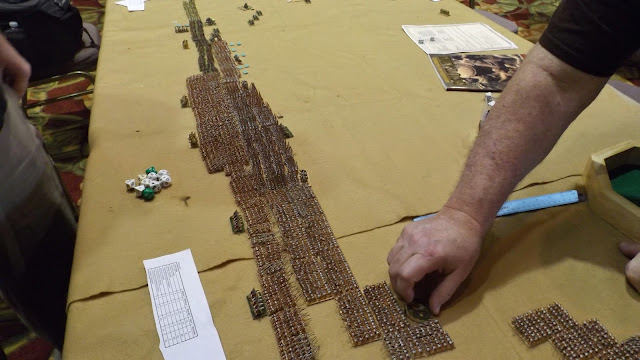 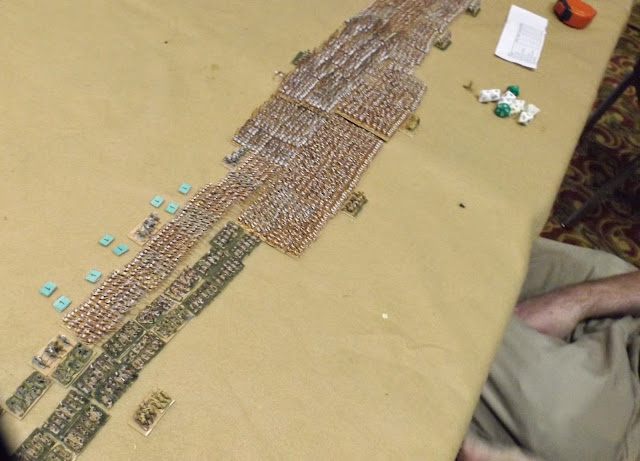 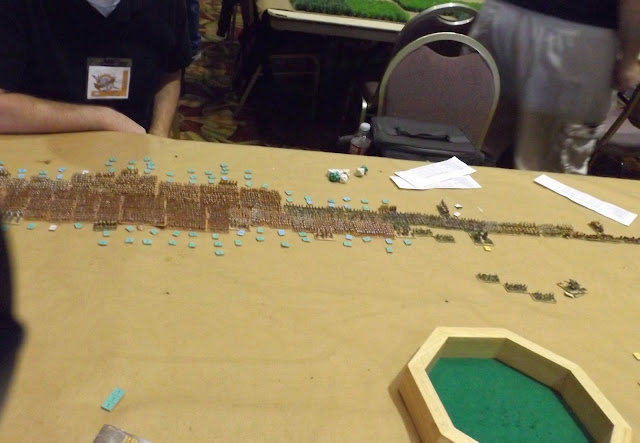 Meanwhile Ptolemy's infantry had finally reached the Seleucid infantry.   His infantry charged into the center of the Seleucid line and casualties began to mount. 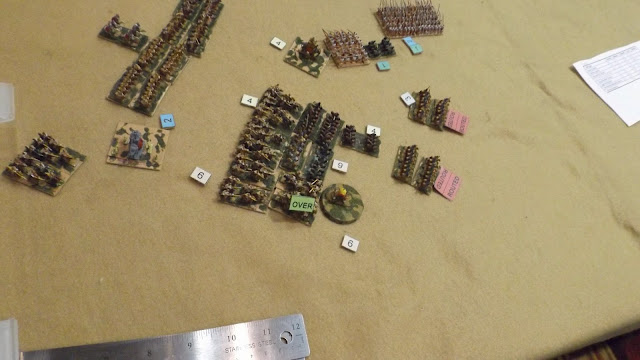 The combat between the two commanders was intense as both sides inflicted three hits on each other.  Both commanders narrowly escaped death.

On turn five Bill won the initiative and elected to move first.   Some of his left wing cavalry broke and fled from the elephants they had been fighting.  On his right flank some of the Galatians and Thracians also fled from the field.  The situation was looking desperate for Ptolemy's army.  Almost all his elephants were dead or had fled from the battle field.  The Seleucids had the advantage on both wings and would be able to turn in on the flanks of Ptolemy's infantry.

Then disaster struck the Seleucid army as Antiochus was slain.  News of his death swept through the army.  Though most of the Seleucid army was unscathed or had only a few casualties, the die rolls caused units along the battle line to become shaken.

At this time we elected to call the game.  Though the Seleucid army still had its part of the fifth turn to fight at least one group of units near the center of the infantry line had suffered heavy losses and was shaken.   It would likely have suffered additional casualties dropping its morale further.  Even if the Seleucids won the initiative and elected to move first on turn six it was quite likely that that group would break causing the other shaken units next to them to rout also.  While it was possible that some units might pass their test for routing friends there was only about a one in ten chance of doing so.   If Ptolemy's army won the initiative and chose to move first the Seleucid infantry would have received casualties from two rounds of combat and their morale would have been reduced even further.

We started shortly after 9 AM and finished before noon.

All the phalangites are by Rapier Miniatures.   All other figures are a mix of Baccus, Heroics and Ros, and Irregular.   There are 4000 phalangites, 276 cavalry,  50+ elephants and escorting light infantry, 720 other infantry, and 28 generals with escorts for a total of over 5000 figures.

Rules used were Scutarii from Hoplite Research
http://www.lulu.com/shop/william-butler/broadswordscutarii/paperback/product-21971341.html
Available in the UK from Caliver books
http://www.caliverbooks.com/searchcat.php?words=scutarii&price=&period=

Additional photos of the game 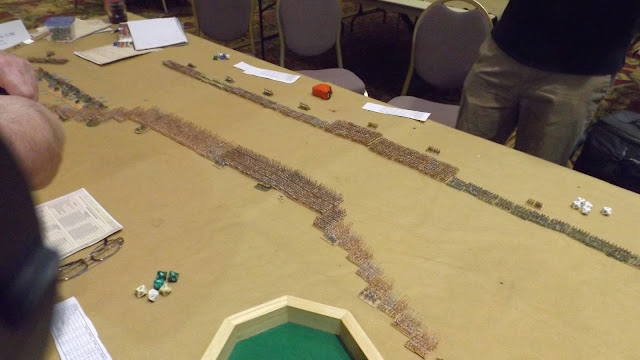 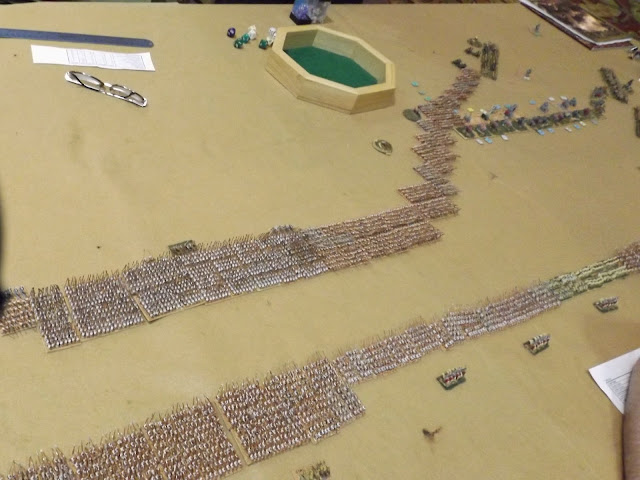 Turn 3 view from Seleucid side
﻿ 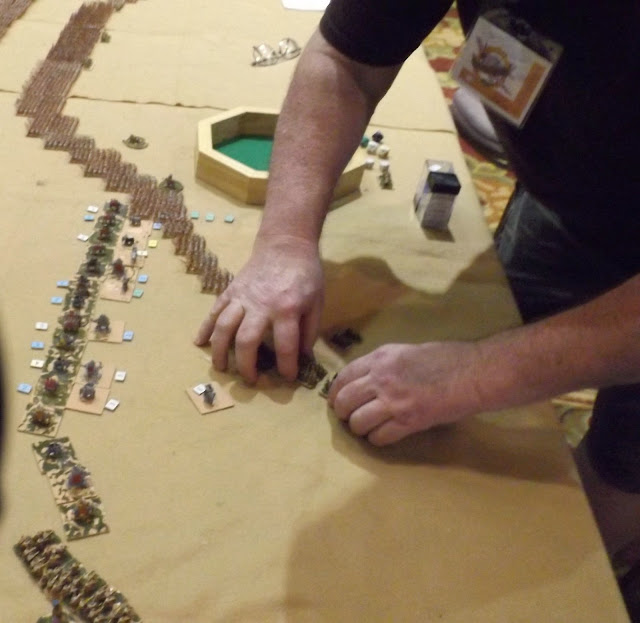 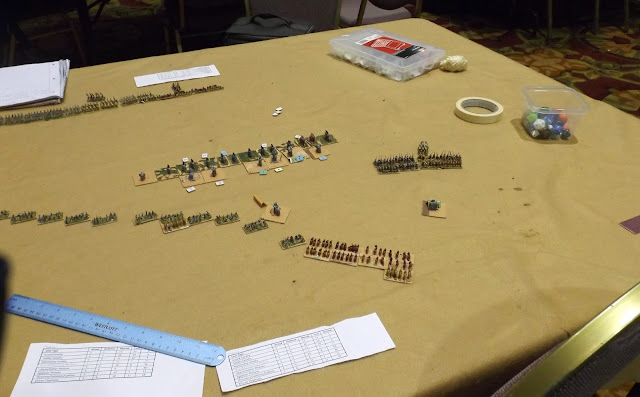 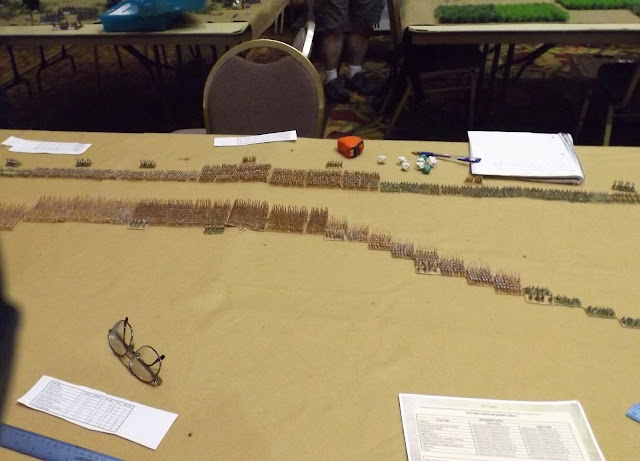 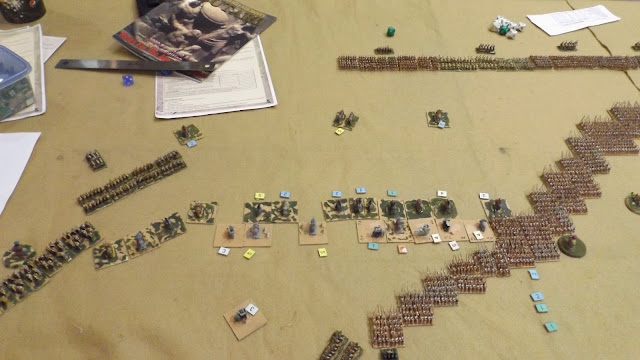 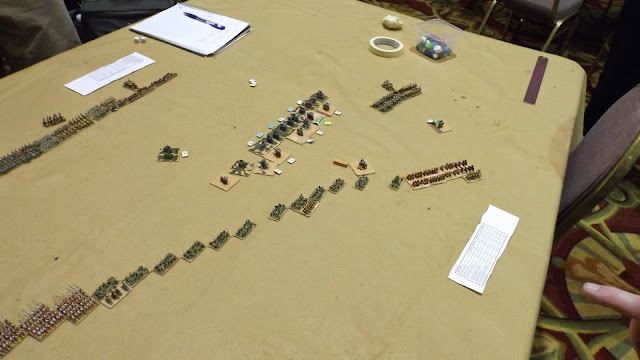 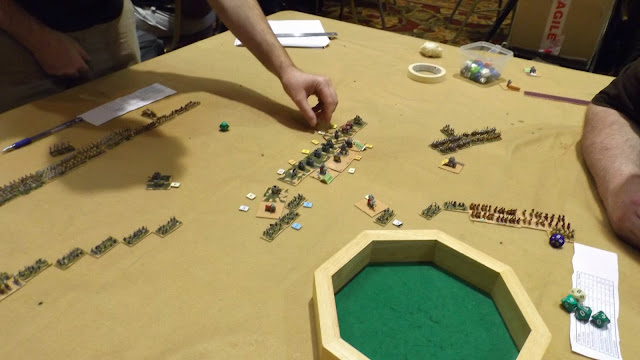 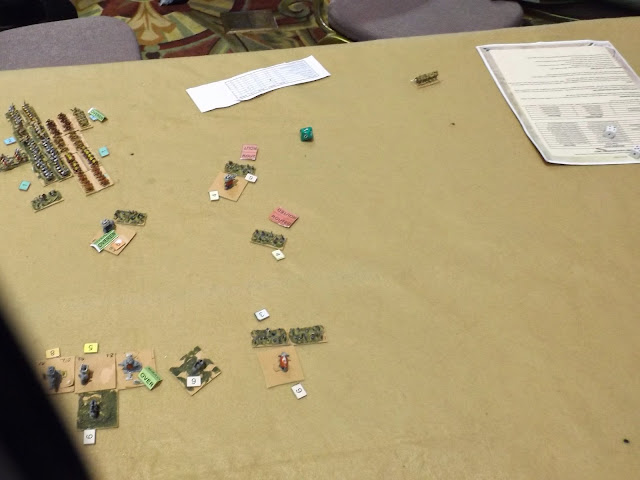 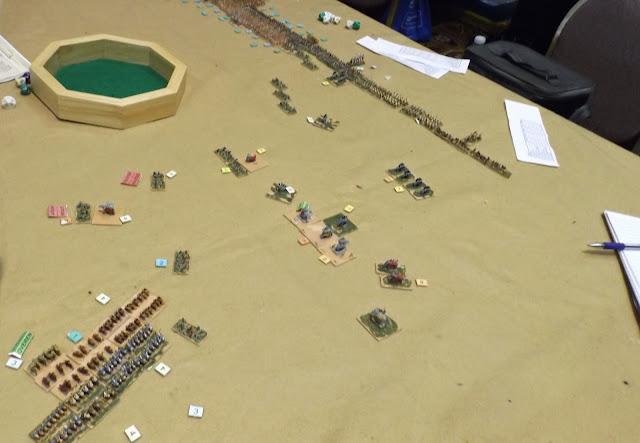 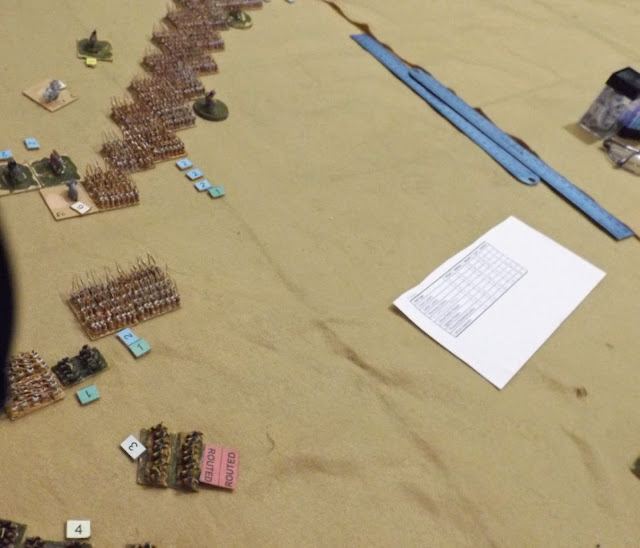 Turn 5 west end of battlefield.
Posted by William Butler at 7:29 AM