The second battle that I ran at Pacificon was Asculum.  The rules were Scutarii from Hoplite Research.  There were six new players for this battle and one who took part in Raphia.  The scenario was slightly modified from the original in the rule book.  The values for the Macedonian phalanx were changed to match the rest.  For this scenario all the phalanx formations are treated as double wide and double deep formations instead of two units by two units.  Also, the Italian and Mercenary infantry should probably have a defense value of 6 instead of 5.

Although this battle will fit on an eight food wide area for 40mm bases, it was fought on the same ten foot wide set of tables used for Raphia.  Once again the outcome of the battle would not reflect history.   At the start of the battle Pyrrhus shifted his guard cavalry and elephants to his left flank.  Neither army was able to gain an advantage in the cavalry combats on either flank until the elephants arrived and helped break the Roman right wing.

Mean while the infantry of both armies had advanced.   The Roman light infantry had moved ahead and began pelting the opposing infantry with their javelins.  They were able to get a couple of turns of missile fire before withdrawing behind their heavy infantry.  The Romans had moved obliquely towards their right while advancing.  The Pyrrhic battle line then advanced into contact with the Romans.   As the fighting in the center continued the Romans withdrew some of their exhausted Hastatii from the front line and replace them with the Princepes.   Part of their light infantry was sent to help support the flanking cavalry.  Much of the Italian infantry on Pyrrhus' left flank eventually fled, though enough remained to protect the left flank of the phalanx.  Both sides infantry had taken a beating, with one Hastatii unit in the Roman center at the breaking point.  The Roman's won the initiative and chose to have Pyrrhus move first.  Initial morale checks saw some of the pike formations break and with the rest likely to join the Romans won.   If the Roman's had moved first it is quite likely that part of their center would have routed, possibly causing other units to rout, causing a Roman defeat.   However, with the Greeks routing they would have received a morale bonus when they checked.

There are about 4500 figures for this battle.  They are a mixture of Rapier, Baccus, Irregular, and Heroics and Ros.  All the phalangites and almost all the Romans are from Rapier.  The battle started about 2 and finished about 5.  The following are pictures from the battle: 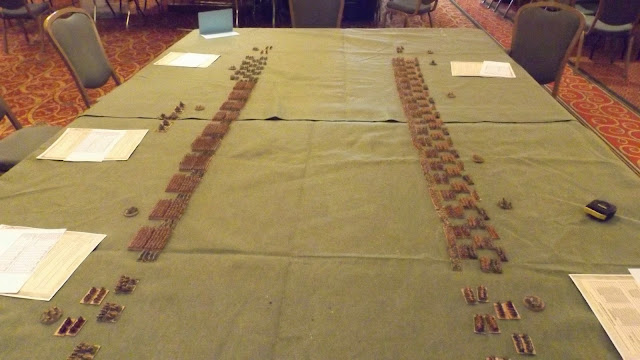 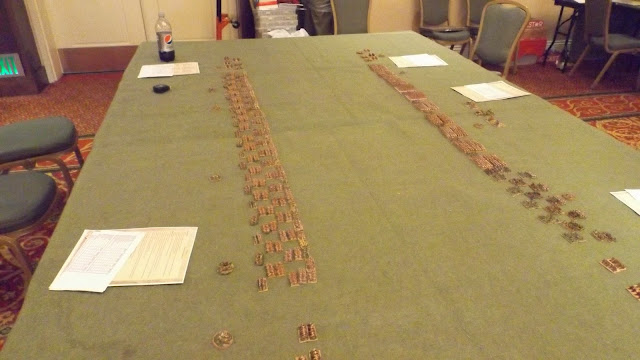 View from opposite end.
﻿
﻿ 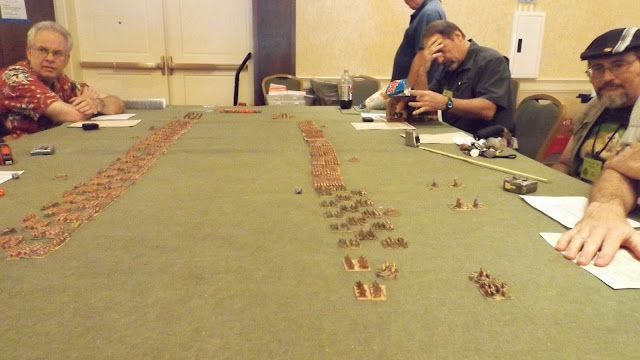 Start of battle.  Greeks on right Romans on left. 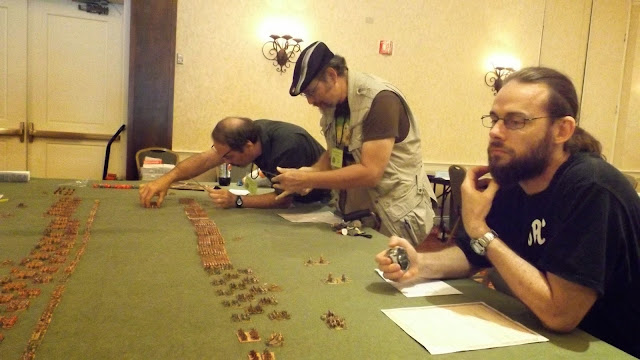 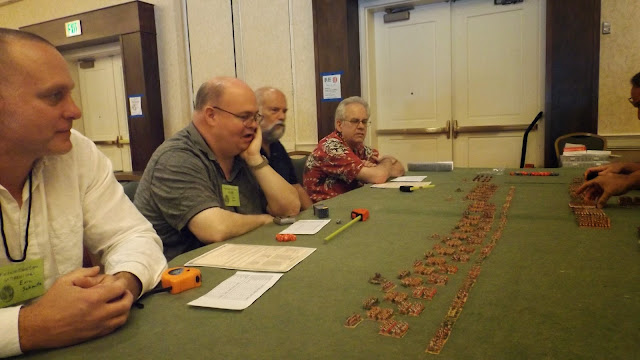 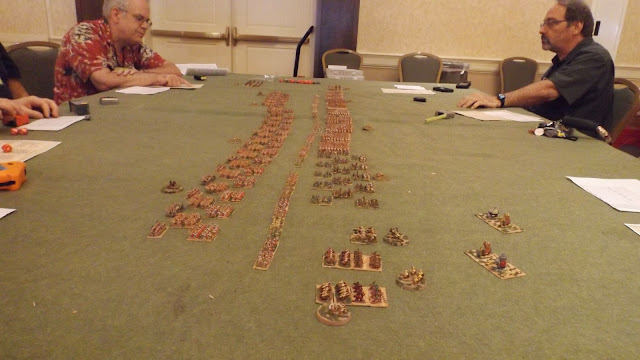 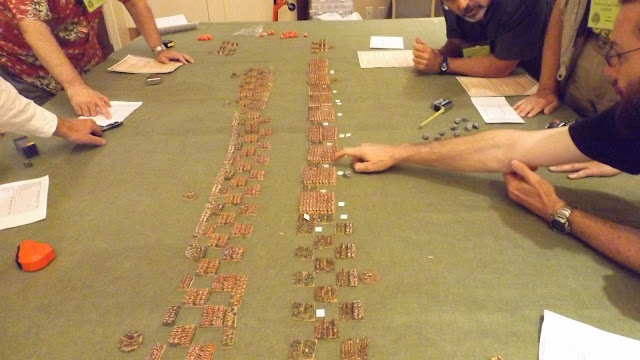 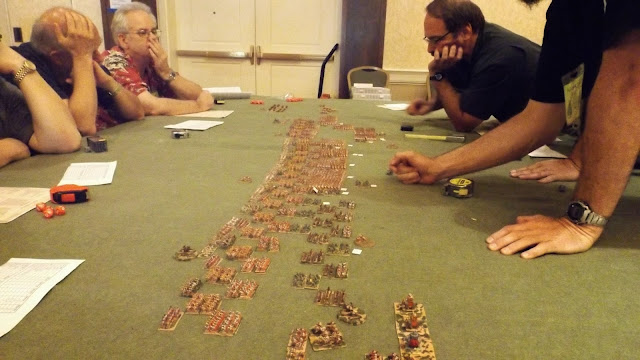 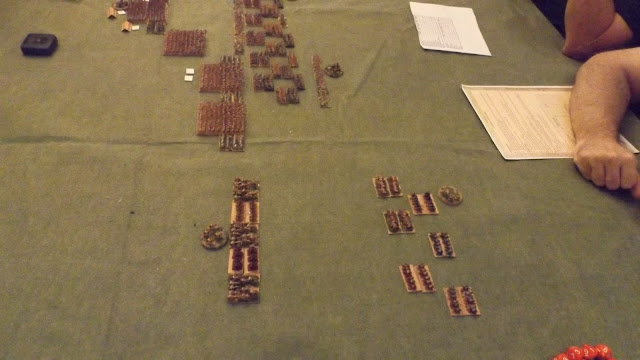 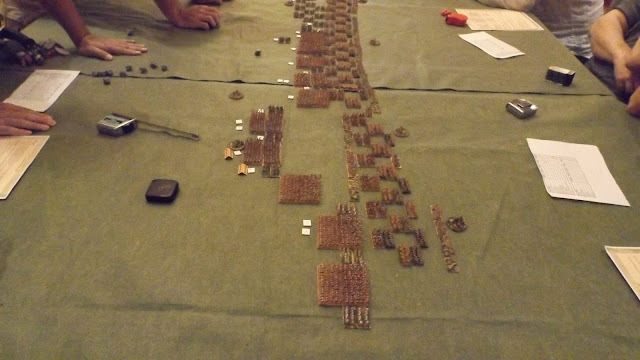 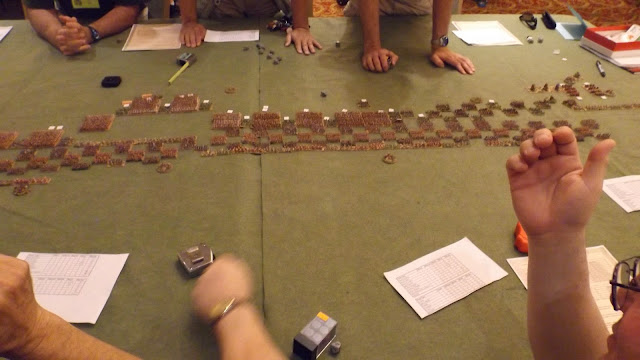 View of the middle of the battlefield from behind the Roman lines. 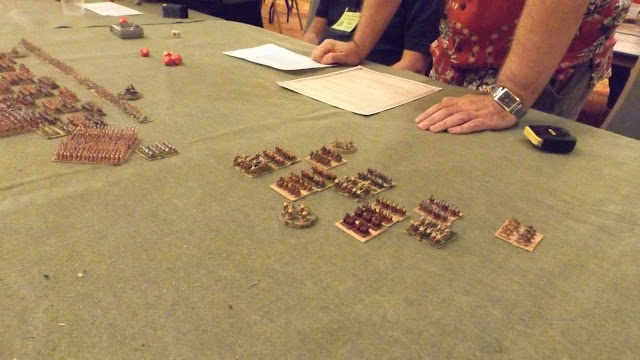 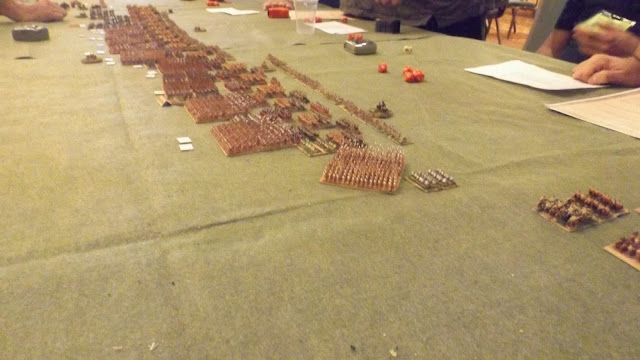 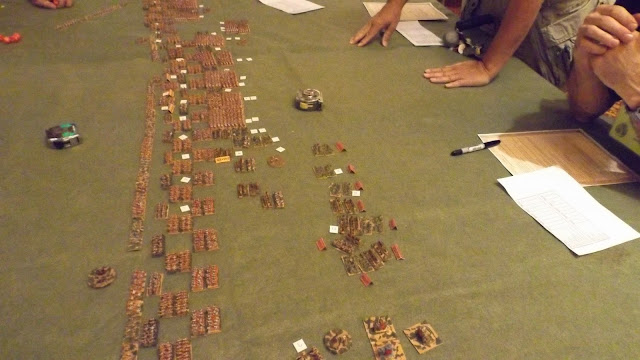 Most of the allied Italian infantry routs. 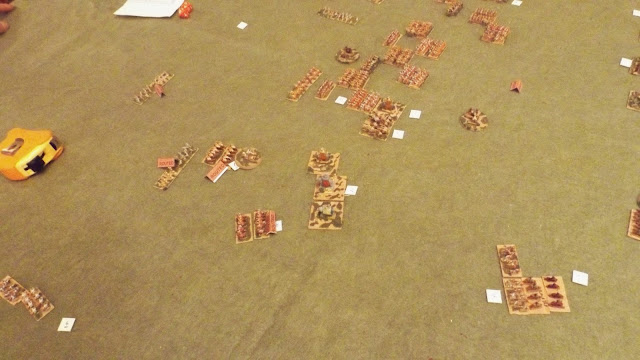 Cavalry and elephants on the Roman right/Pyrrhic left 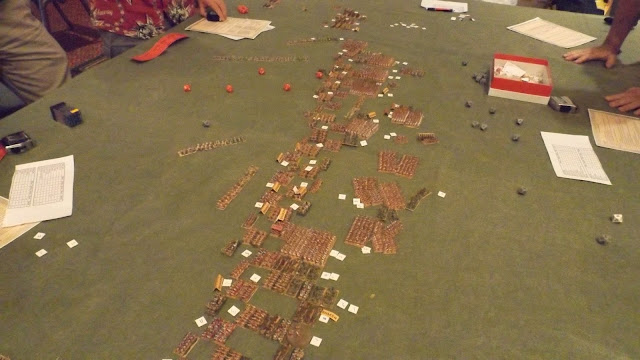 End of battle as phalanx starts to rout.

Posted by William Butler at 9:29 AM