I ran the battle of Asculum again for the Peanut Wars Mini Game Convention.using Scutarii from Hoplite Research Games.   Charles Liu was Pyrrhus and Alan Sissenwen was the Roman consuls. Initial dispositions.  Greeks on the left, Romans on the right.  Each unit represents about 500 men or 5 elephants, though the units of Triarii represent fewer men.   The phalanx units are also treated differently for this battle using an optional rule.  Normally they would be two units wide by two units deep.  In this case they are being treated as one unit wide by two units deep.  Since I had enough figures for this battle each unit had two bases, except for the elephants and the Triarii who only had one base per unit.  When the bases are placed side by side the unit is in open order and when placed one behind the other they are in close order.  Units can also be represented with a single base instead of two.  The rules allow the use of armies based for DBX/FOG, Warmaster, and others. 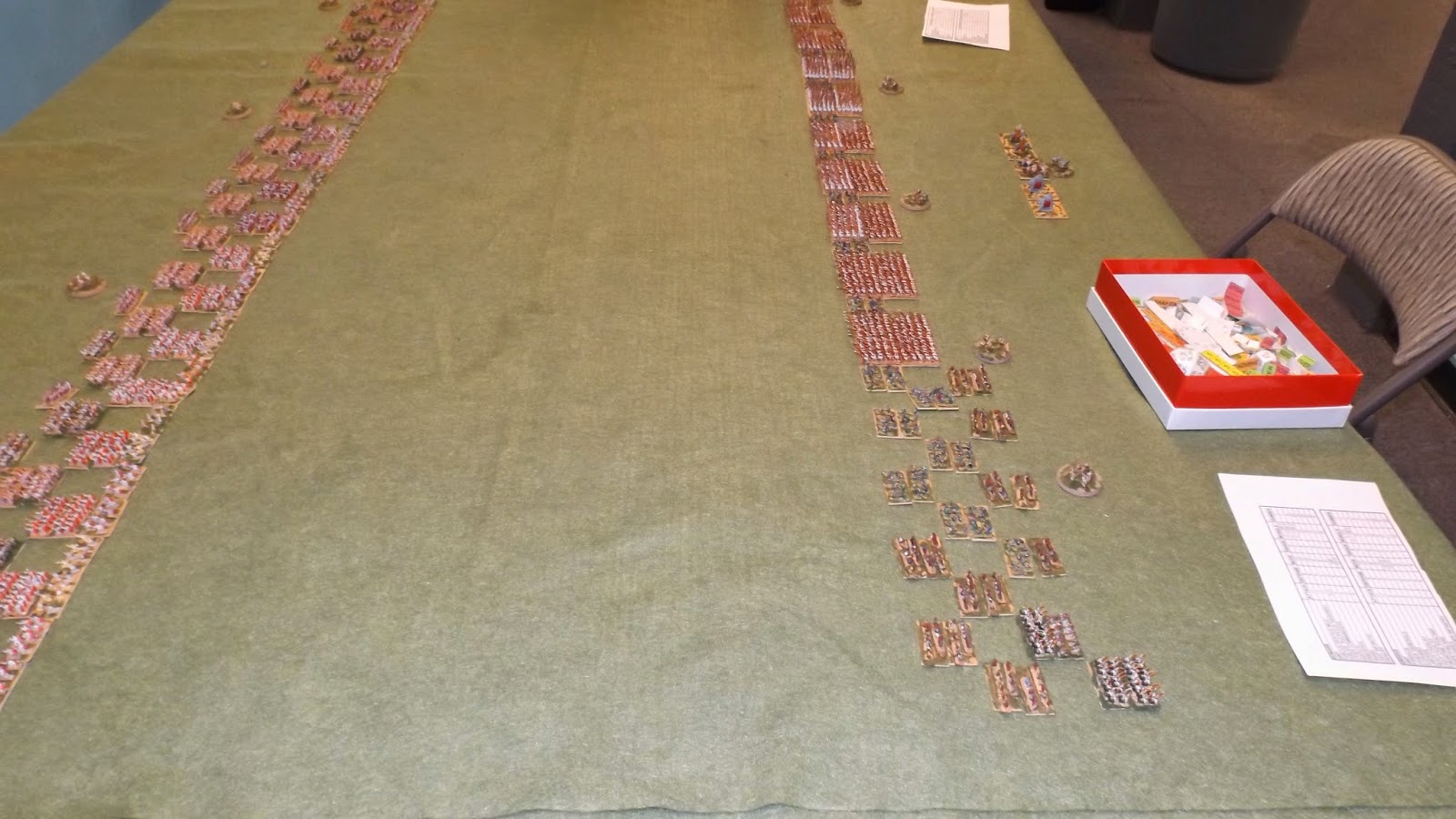 View from the other end.  Italian allies on right.  Almost all the figures in the Roman army are from Rapier miniatures.   The phalangites are also all from Rapier.    The Greek lancers are from Bacchus.   Other figures are mostly Heroics and Ros and some Irregular Miniatures infantry and elephants. 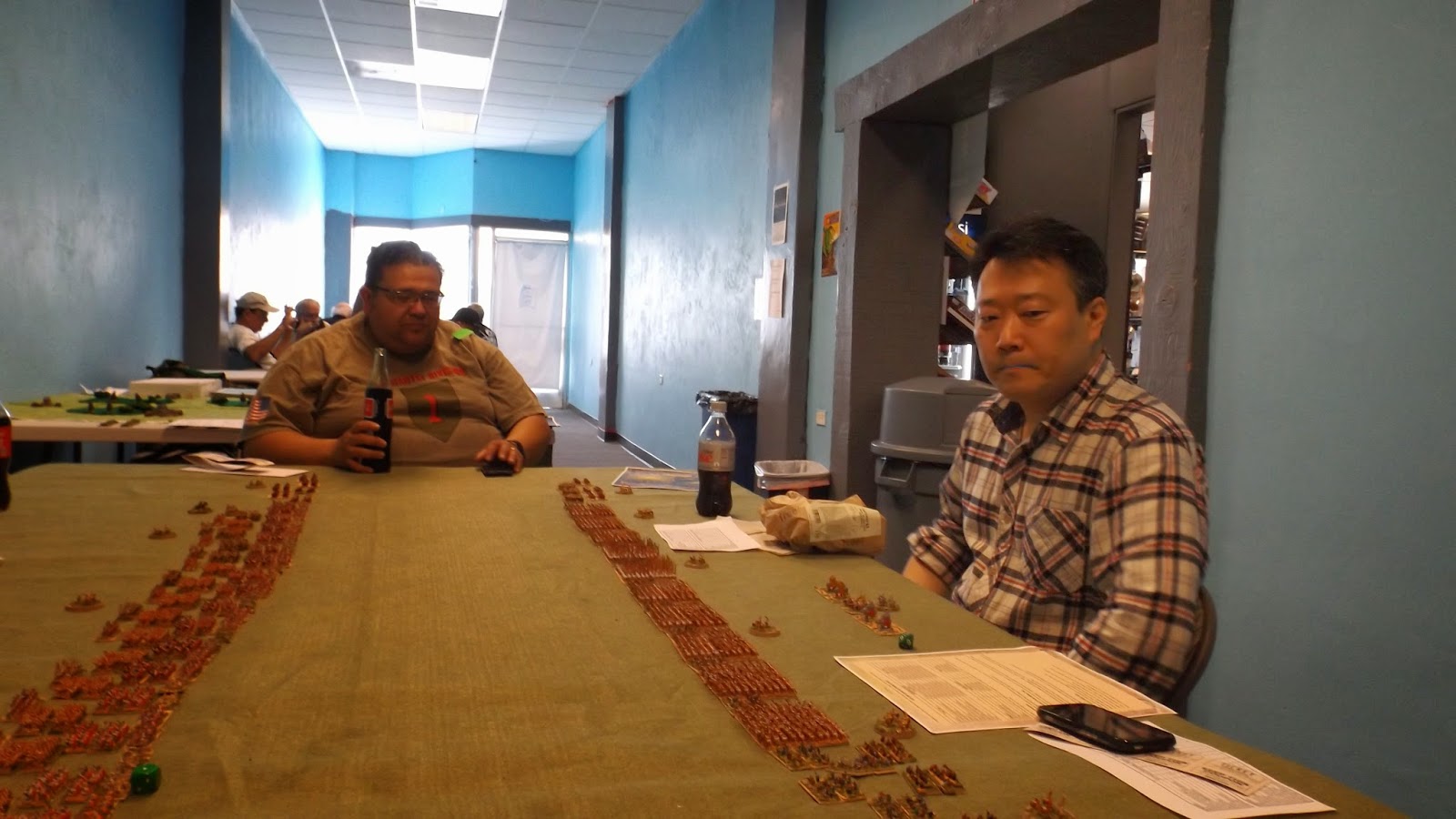 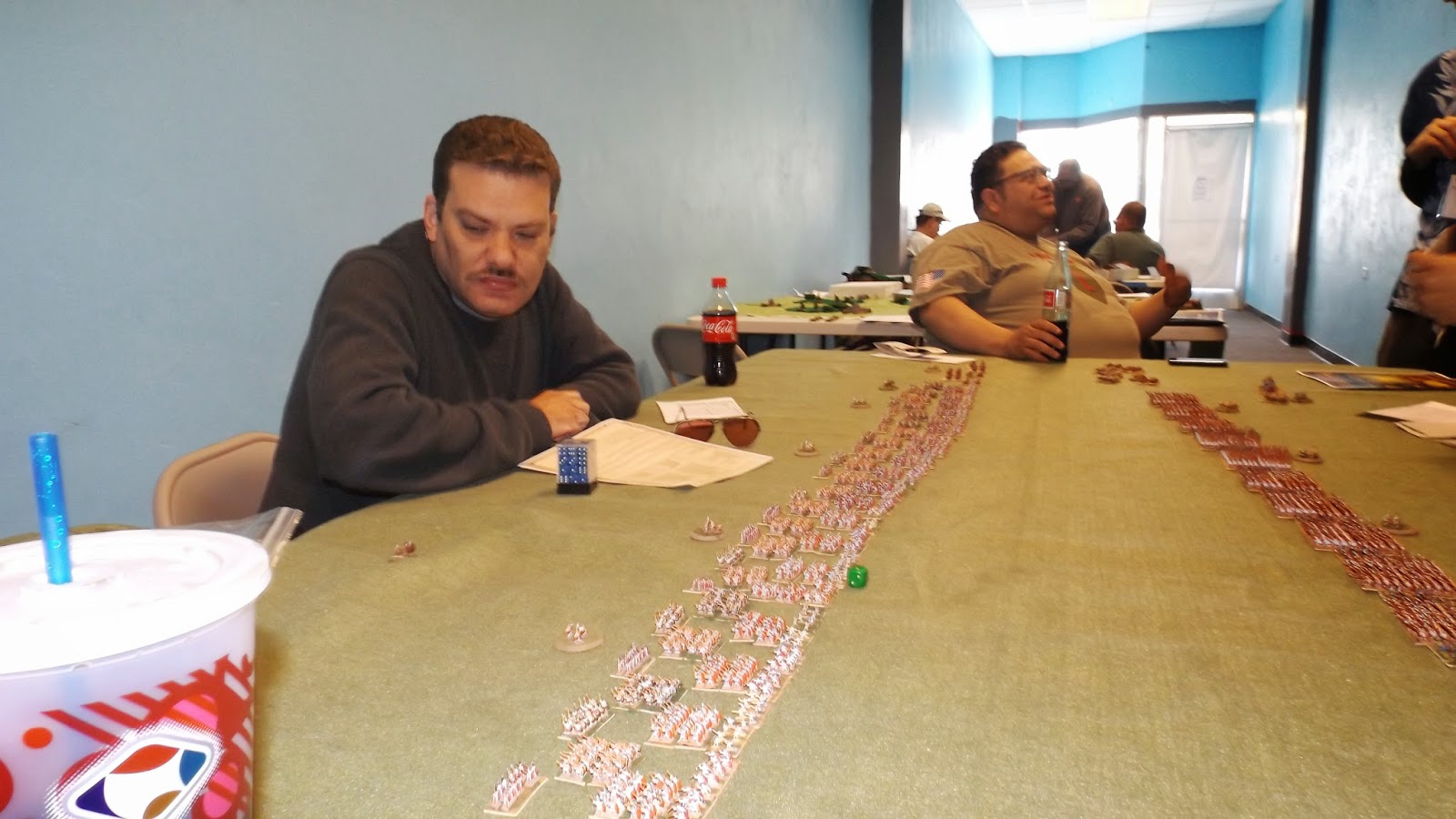 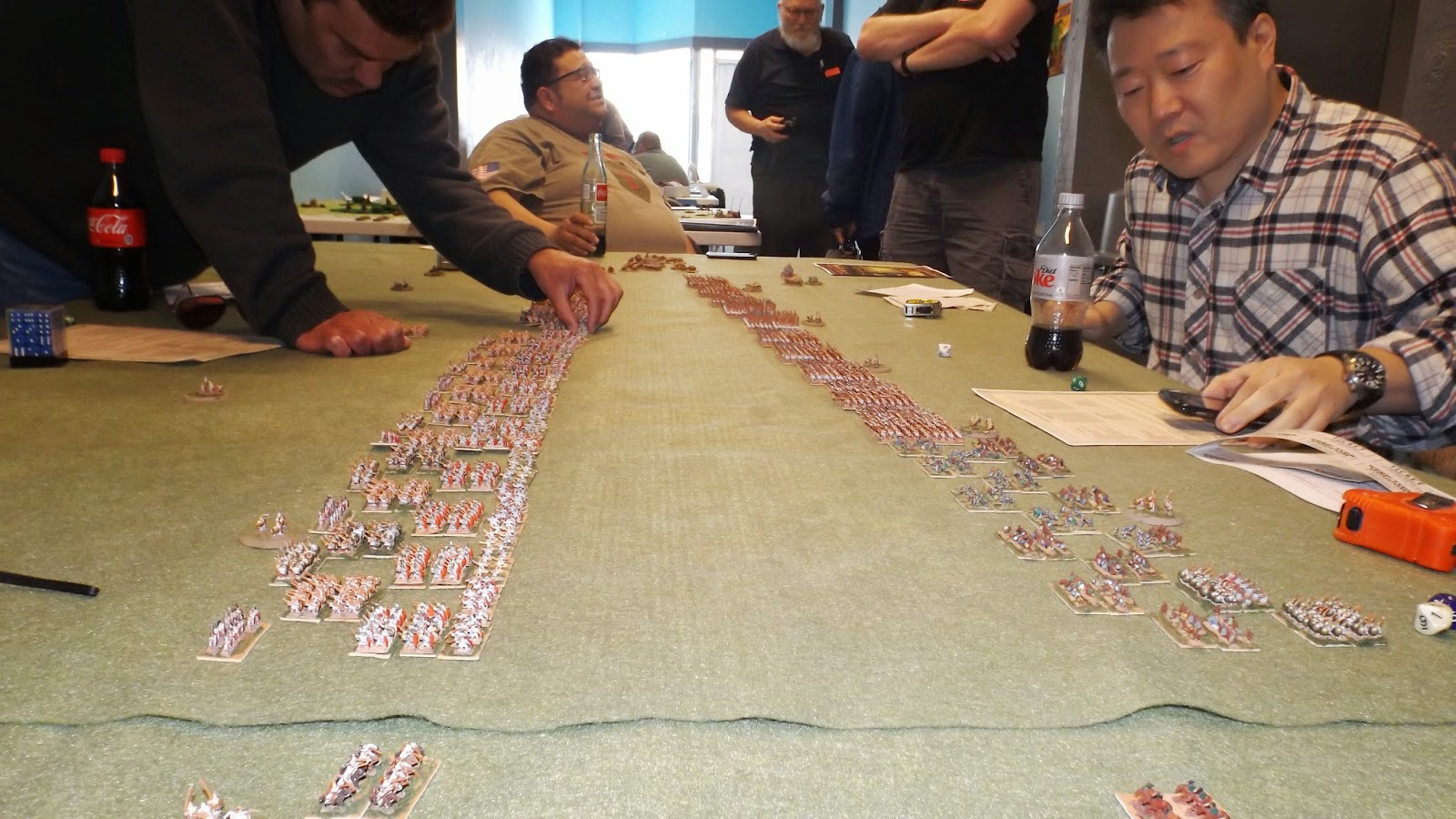 Alan won the initiative die roll for the first turn and decided to move first.   He advanced his entire army at the close order infantry movement rate keeping his cavalry in line with his infantry center.  Charles chose to advance his infantry in echelon, with right wing leading.  He also decided to move his elephant and guard cavalry reserve to his right flank. 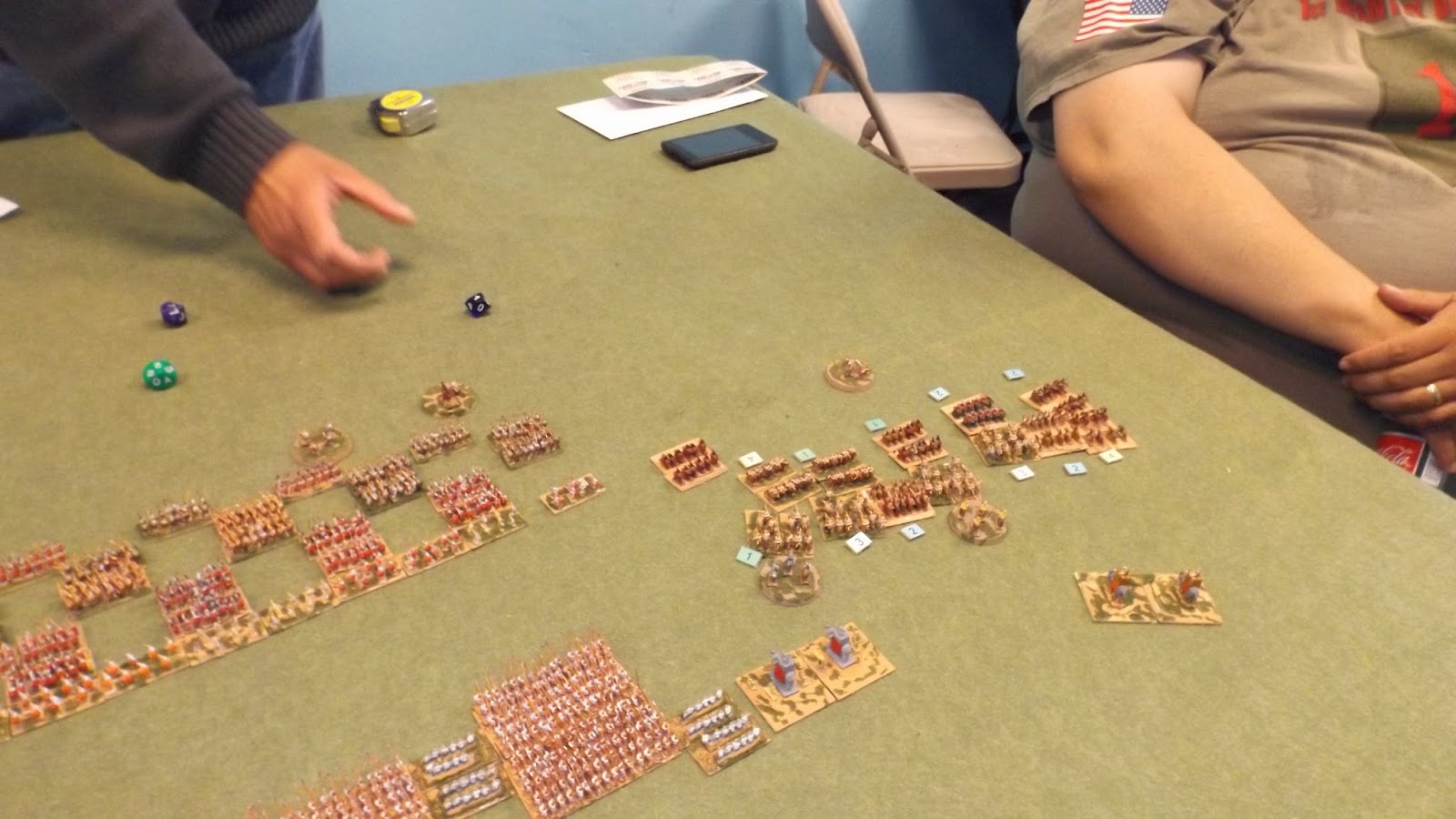 End of second turn.   Alan again won the initiative and choose to move first.   He advanced his infantry at the close order rate again and attacked the lead elements of the opposing cavalry on his left.  During his turn Charles added his unengaged cavalry and Pyrrhus to the fighting.   The above picture shows the results of the two rounds of combat at this point.  During a player's turn they first resolve any morale checks before moving any units.  During their movement phase they may conduct missile fire at any point during their move.  After movement is completed both sides conduct melee for any units in contact with opposing units.  Markers show the number of "hits" that each unit has received and represent casualties, fatigue, and loss of willingness to continue fighting.  The Greeks have not done as well as the Romans.  Pyrrhus and the other Greek commander survived their checks for possible loss during combat. 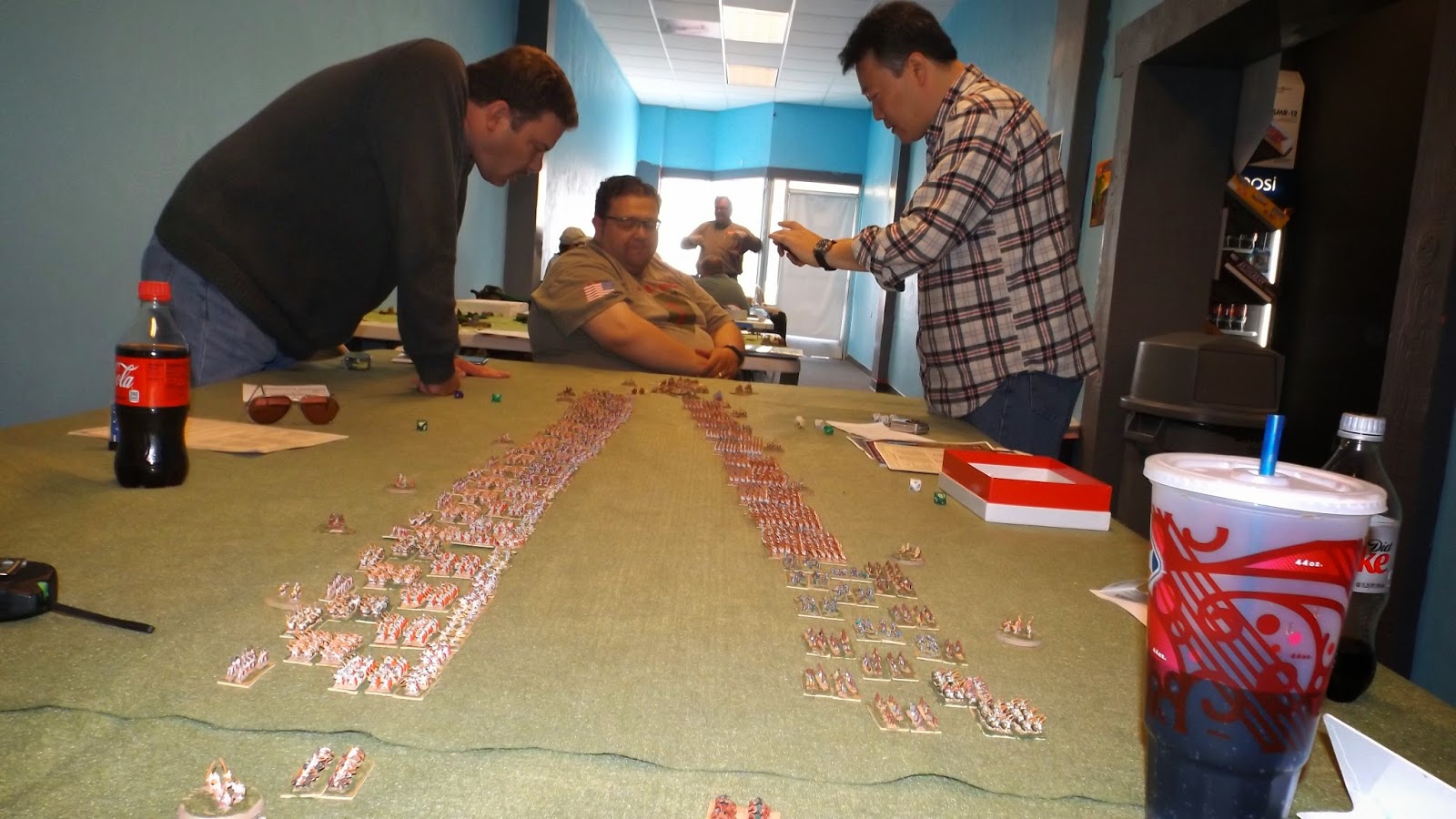 View of the battlefield at the end of turn two showing refused Greek left wing and players beverages. 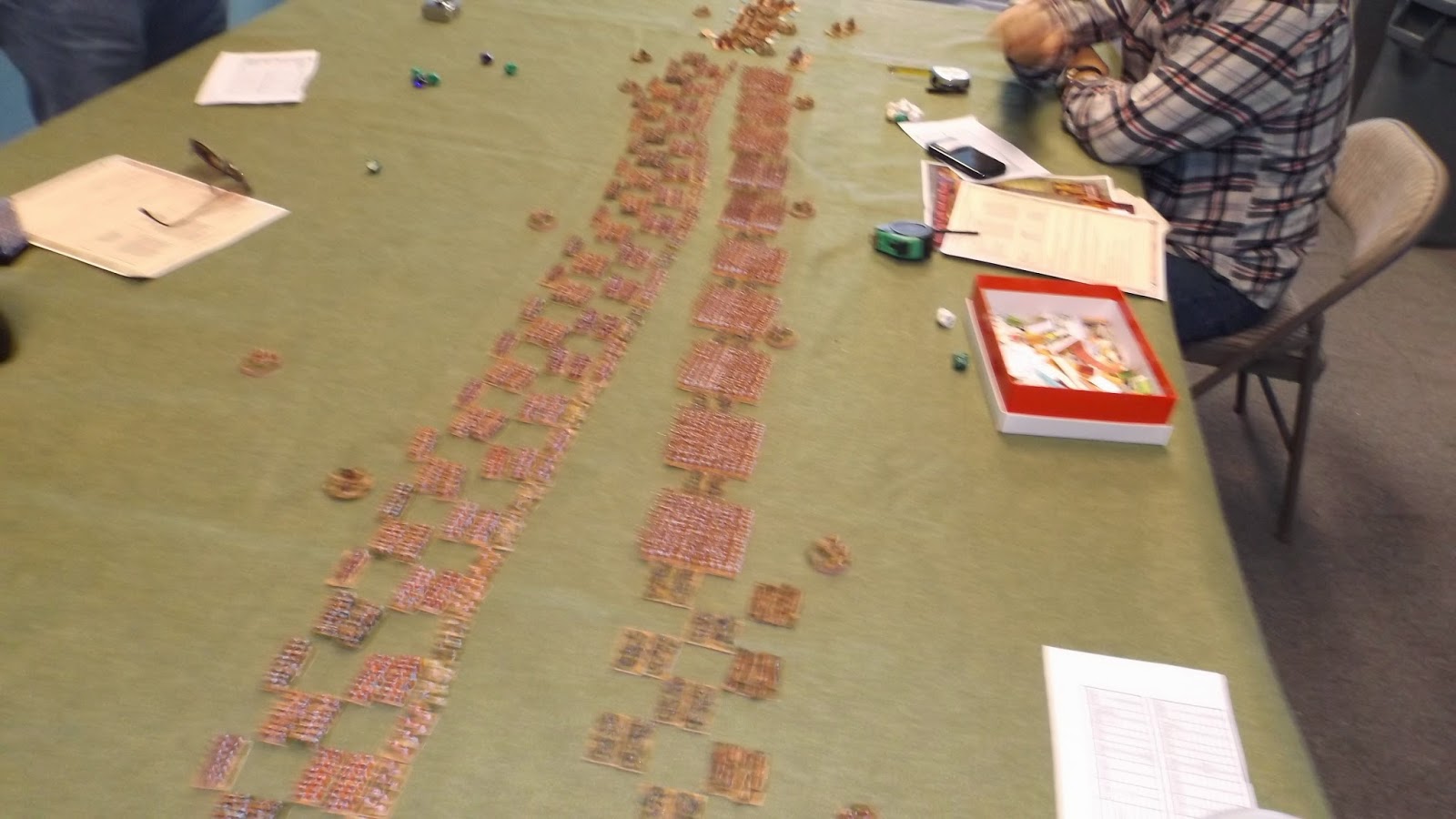 Turn 3.   Alan again won the initiative die roll and chose to move first again.   The Roman army moves closer to the Greeks and their light infantry tossed their javelins at the opposing troops. 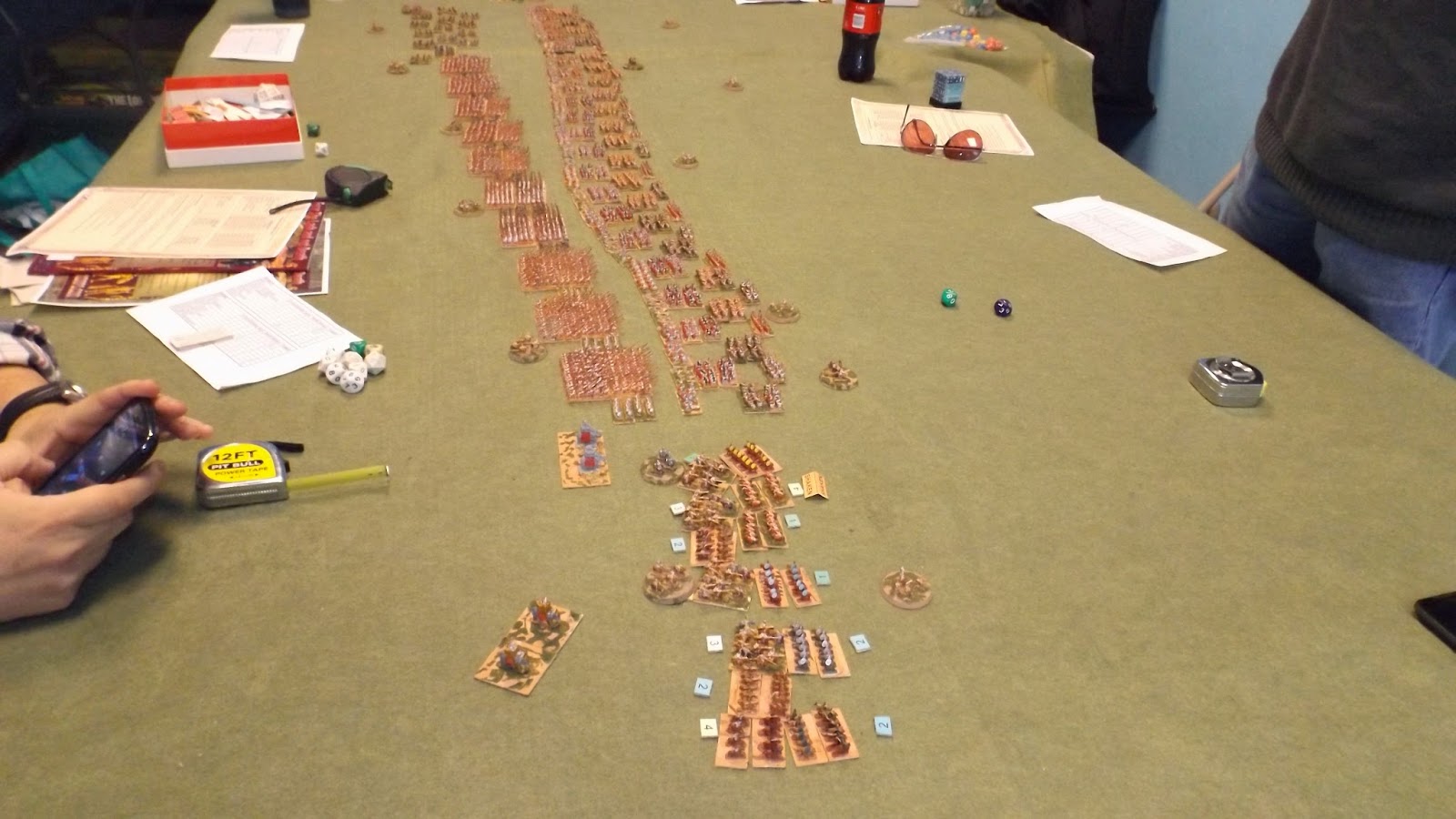 The other end of the battlefield.  One of the Roman cavalry units has failed its morale test and has become shaken. 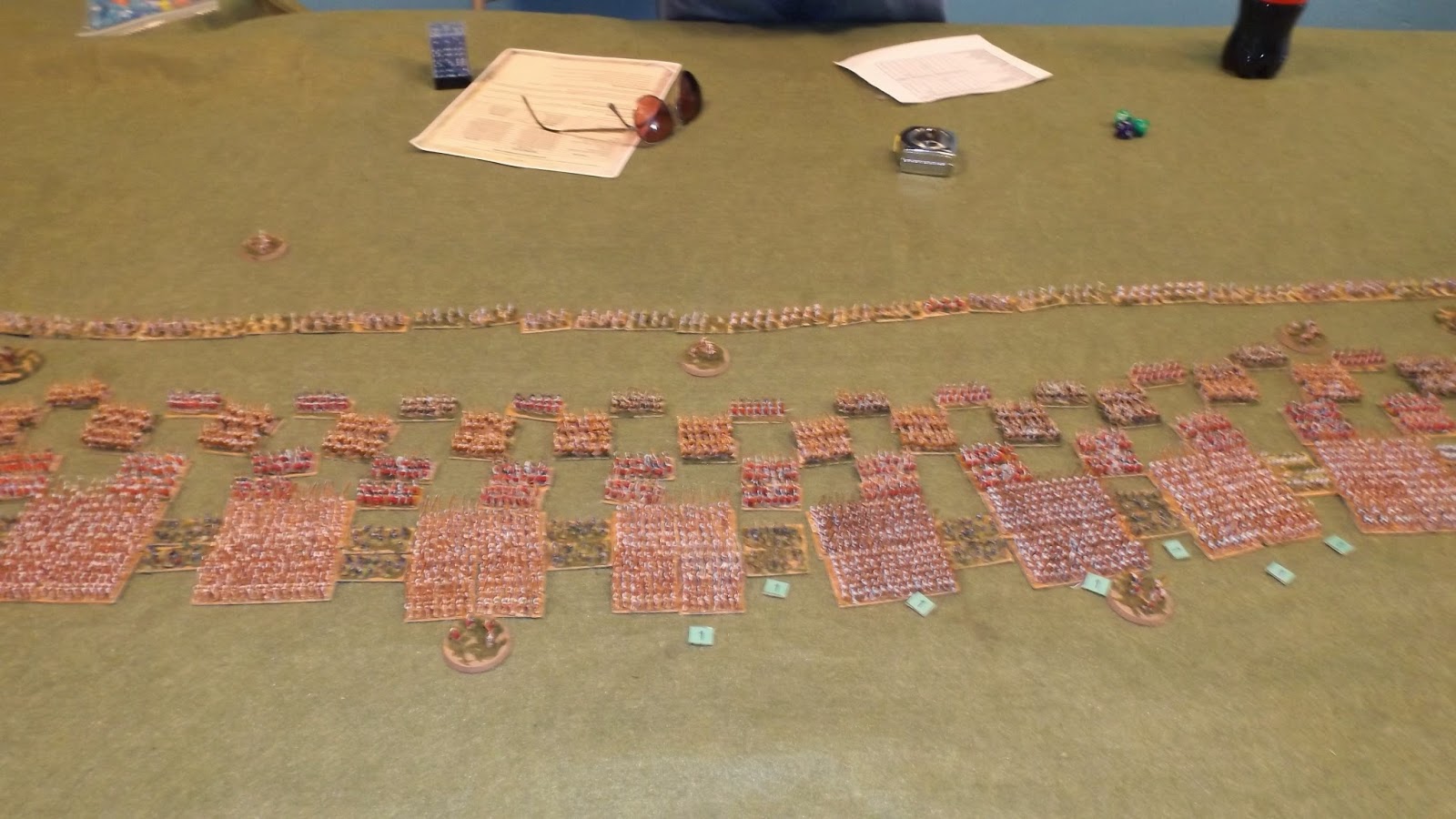 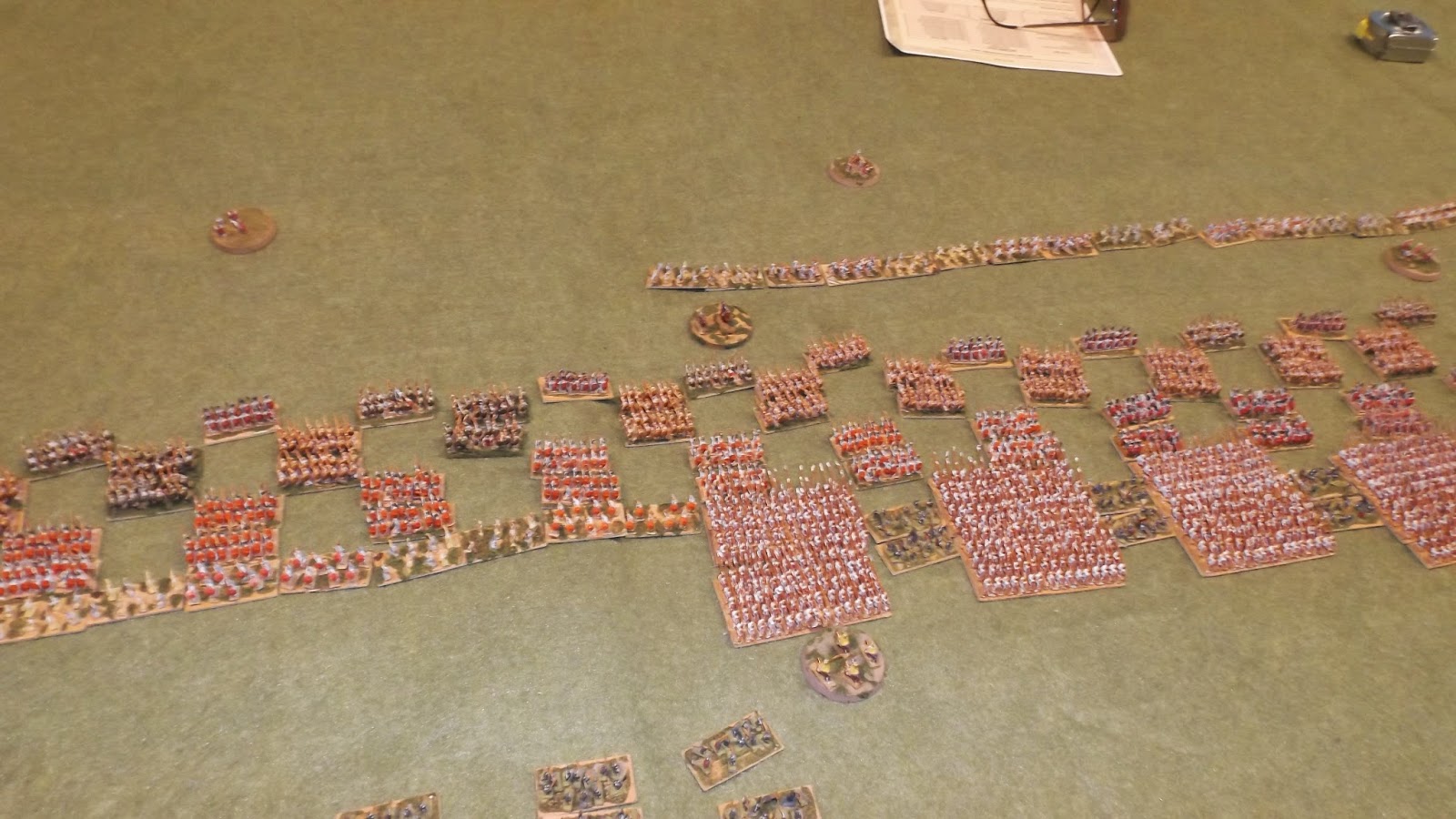 Additional views from behind the Greek line. 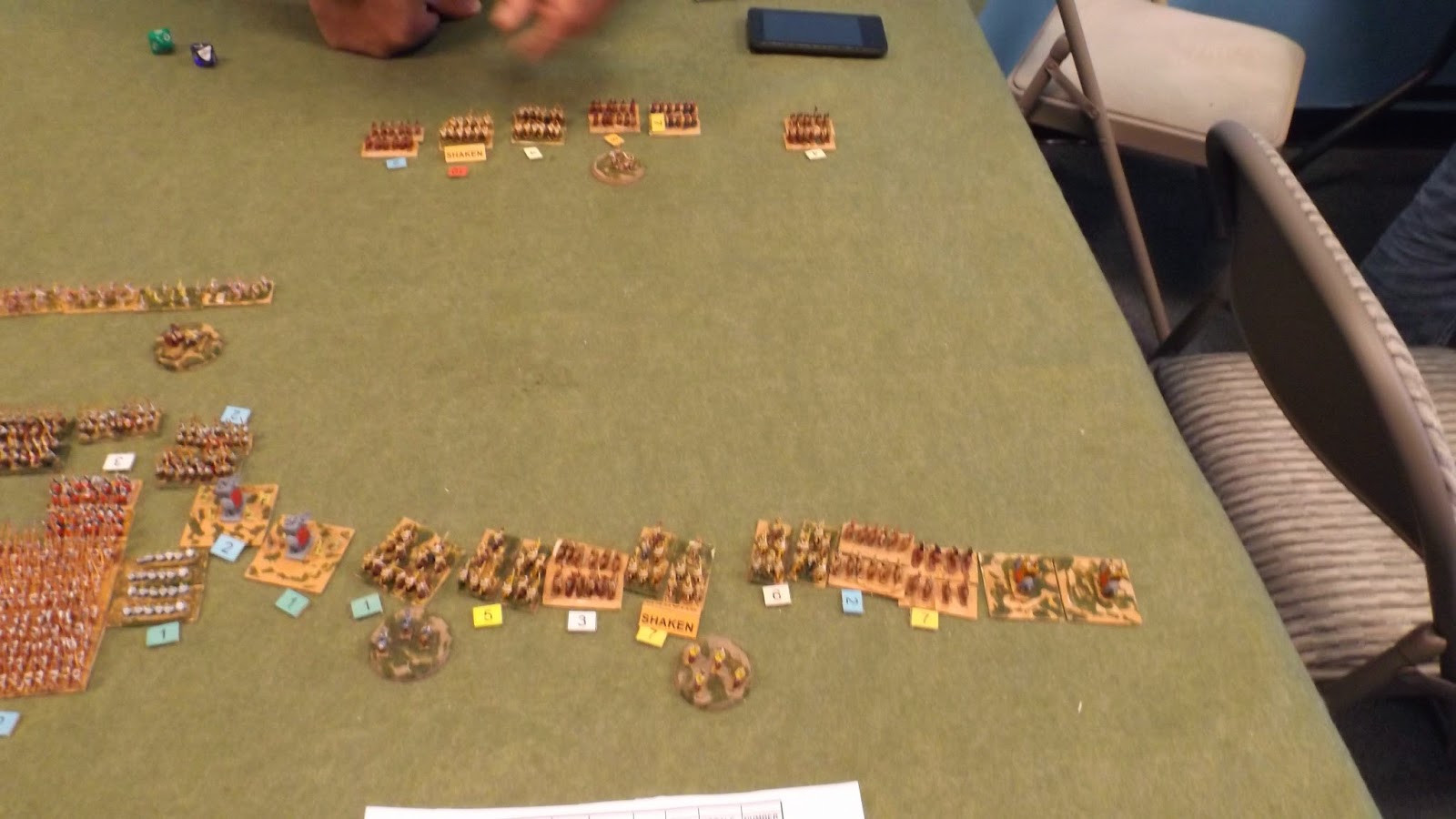 Turn four.   Charles won the initiative and chose to move second.  Both sides had taken additional damage and had units in critical states due to the number of "hits" they had received.   The shaken unit on the Roman left had received enough hits to reduce its morale to zero and was also shaken causing it to rout.  The units next to it also failed and routed with it.  All the other cavalry units on the Roman left also failed their tests resulting in the entire Roman cavalry wing routing.   Since the Greek cavalry was drilled they could test to not pursue the routing Roman cavalry and spend their turn halted and reorganizing.   One unit of lancers could not be halted.  That unit and the one unit of elephants chased after the routers.  The others passed their tests and the shaken unit also recovered.  As can be seen the Greek general commanding the shaken cavalry unit managed to survive several rounds of combat.   This was not the case with three of the generals commanding the phalanx units and the Roman general commanding the cavalry on the Roman right.  The cavalry battle on the Roman right saw one of the Greek cavalry units rout, while the other continued to fight valiantly. 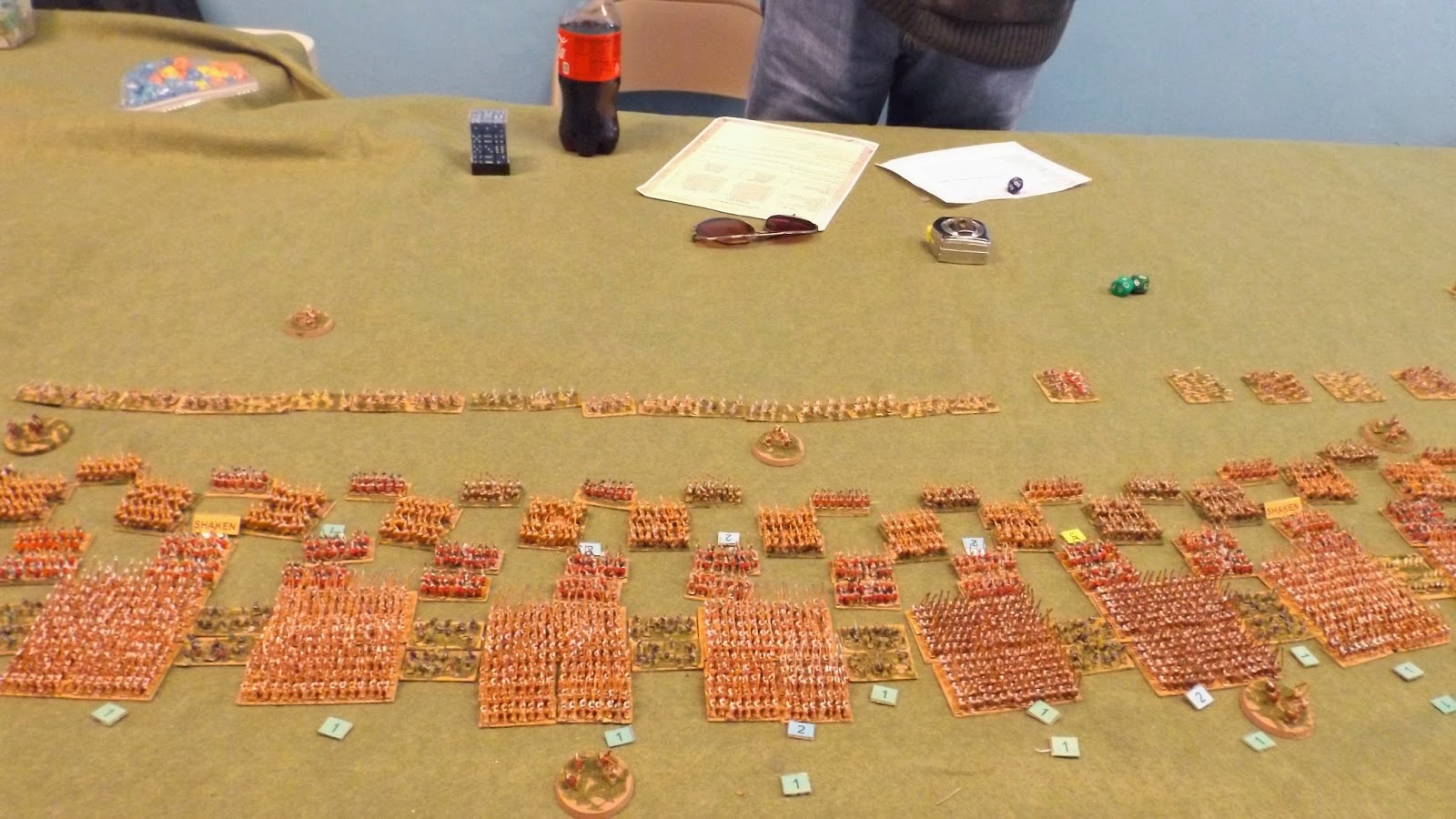 Start of turn four.   The infantry battle.   The phalanx is winning the combat against the Hastatii.  Since they are two units deep hits are shared between the two units with markers showing damage to the front unit and the rear unit.  Also, due to their size hits against them are halved, rounding up.   The Roman formation prevents the phalanx units from getting an attack bonus for overlapping their opponents.  During his turn Alan would replace the three shaken Hastatii units with the Princepes from the second line.  There were a couple of other Hastatii units that had more than a two "hits" of damage that he should have replaced also.   This was to be the undoing of the Romans.  Also, for some reason Alan had not advanced the Roman infantry on his right to engage the Italian infantry on the Greek left.  Up to this point Charles had average to poor die rolls causing only minor damage to the opposing units.  During his part of turn four he caused more damage than he received. 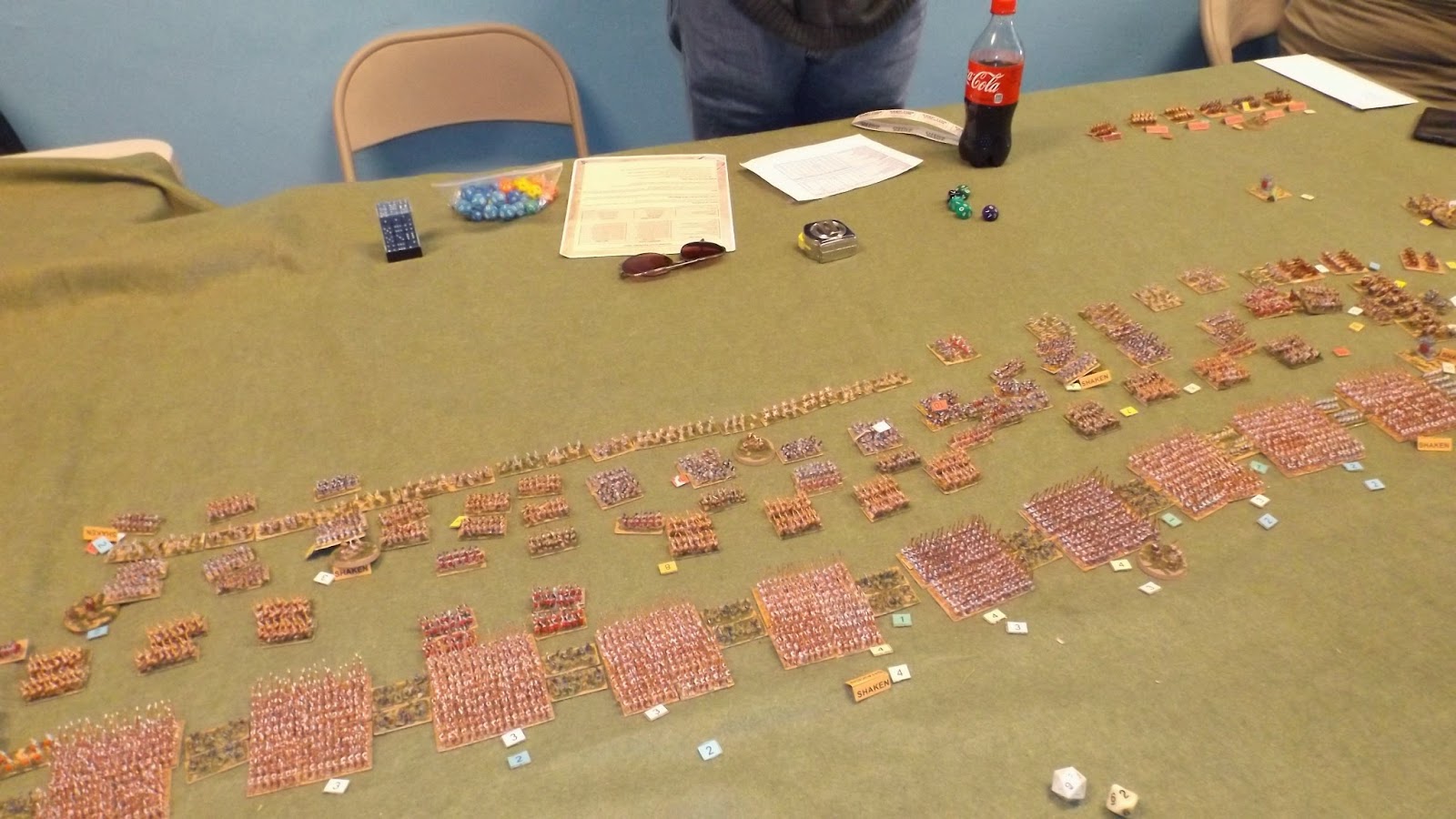 On turn five Charles again won the initiative and chose to move first.   Since his units were still in fairly good shape almost all of them passed their morale checks.  Two phalanx formations did become shaken.   He again caused more damage to the Roman infantry than he received.   It was now the Roman turn.  Several units had been so badly hurt that their morale was now down to zero or less.  When they routed, they caused additional units next to them to test, resulting in more units routing.   About half the Roman heavy infantry ran from the field taking the light infantry in the rear with them.  At this point Alan conceded.  Charles had managed to achieve a better victory than Pyrrhus, having only 500 cavalry from his left flank rout and about 200 other casualties represented by the total of the hit markers on his units.

Rules used were Scutarii from Hoplite Research
http://www.lulu.com/shop/william-butler/broadswordscutarii/paperback/product-21971341.html
Available in the UK from Caliver books
http://www.caliverbooks.com/searchcat.php?words=scutarii&price=&period=
﻿

Posted by William Butler at 8:42 AM

Damn, but that's impressive! Puts our 6mm games to shame :)