Putin on the (f)Ritz or Crimea River

I ran a hypothetical (?!) Russian invasion of Ukraine scenario at the South Bay Game Club on April 12th.   The rules were Cold War Commander using my microarmor Russians.   The Russians were attacking against a Ukrainian hasty defense.  Both sides diced for the force they would use.   The Russians were lucky and got the strongest brigade of two tank battalions, one bmp battalion, three btr battalions, and an artillery battalion plus additional brigade assets.   The other two brigades only had five battalions each.   In addition they also had an artillery brigade of three gun battalions and one multiple rocket launcher battalion.

The Ukrainians were not as lucky when they diced for their force.   They ended up with only one tank battalion, one bmp battalion, and one artillery battalion along with the brigade assets. 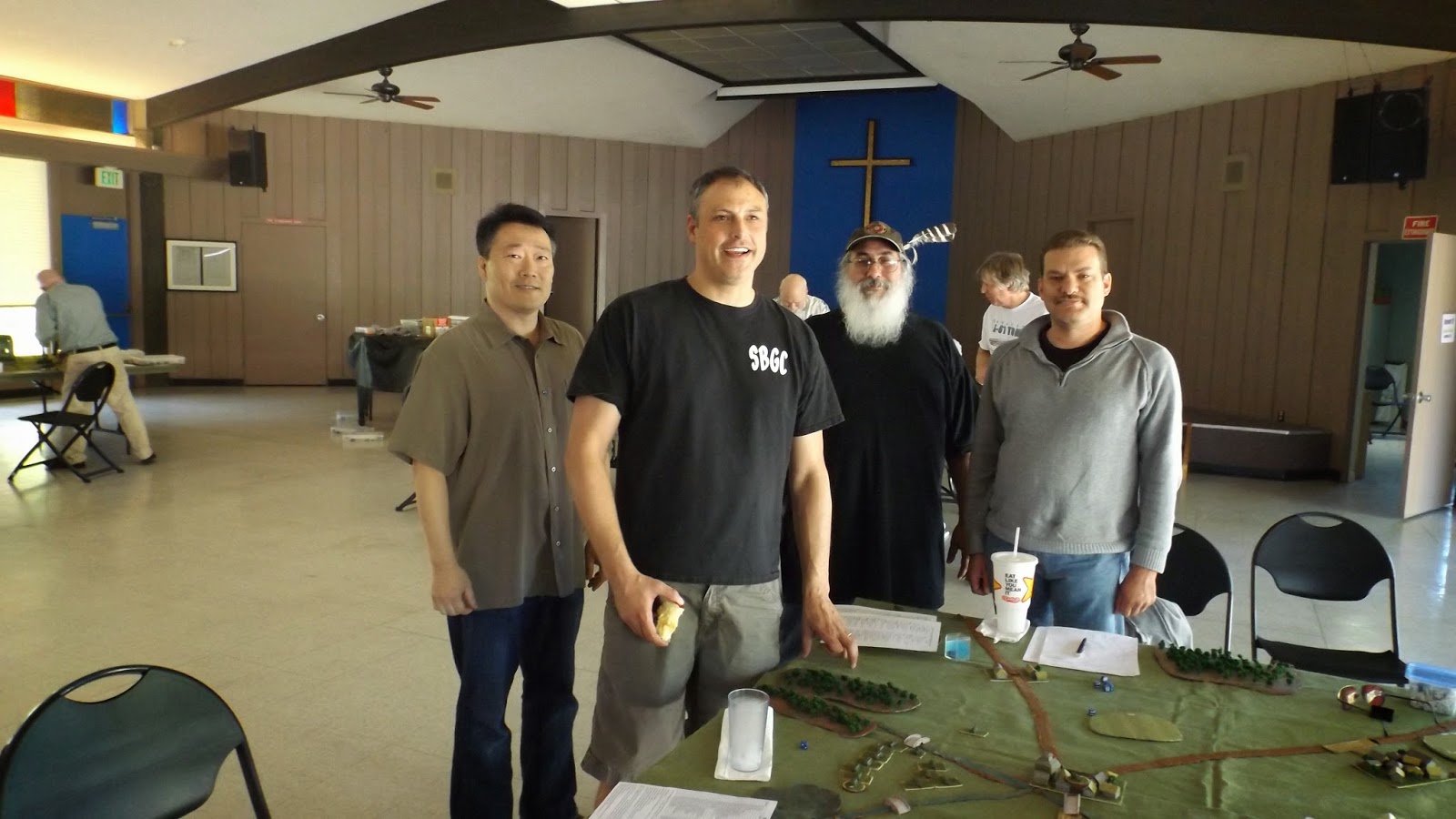 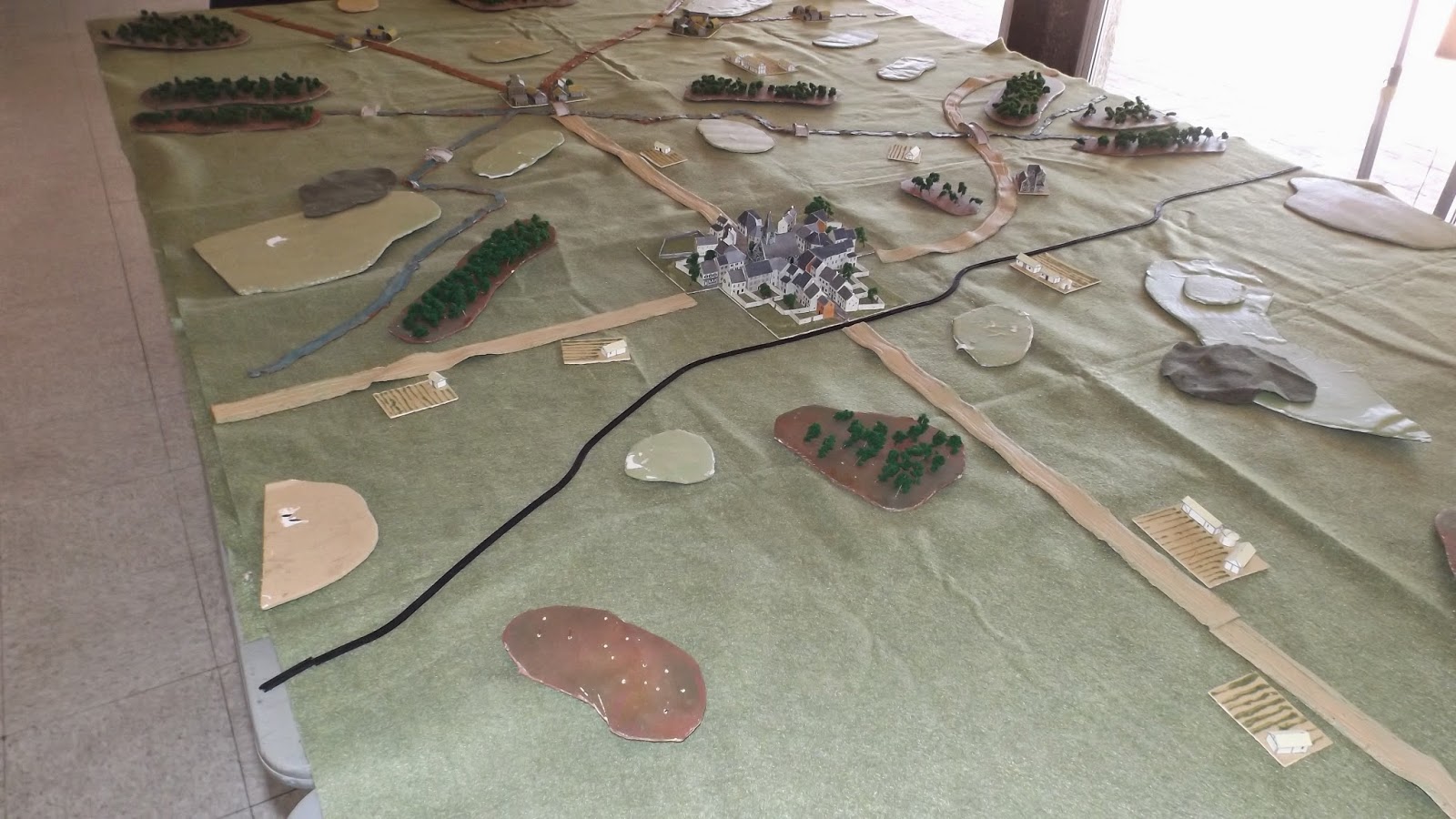 Looking East from the Ukrainian side.  The game table was 6 feet by ten feet. 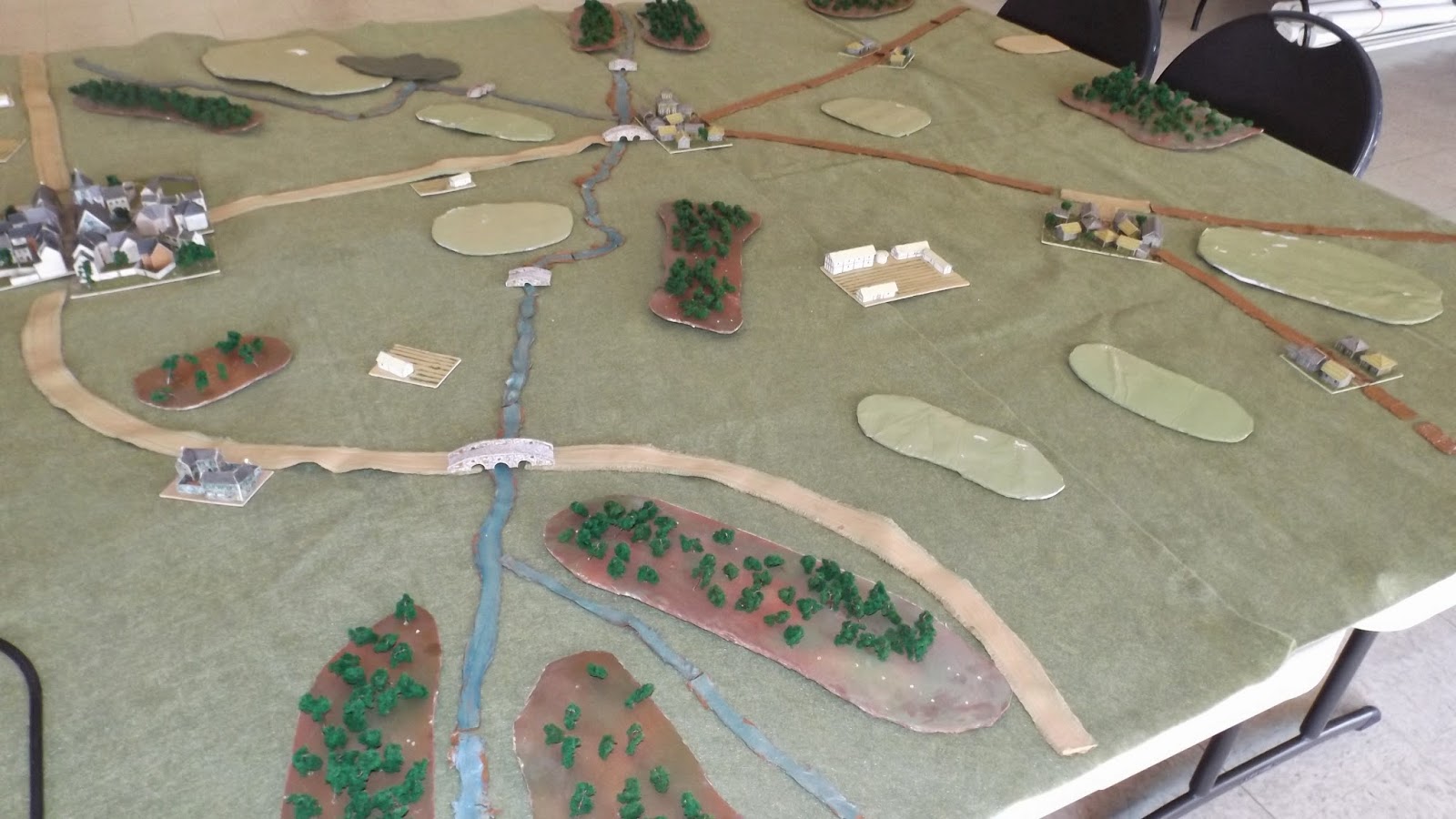 View from the South. 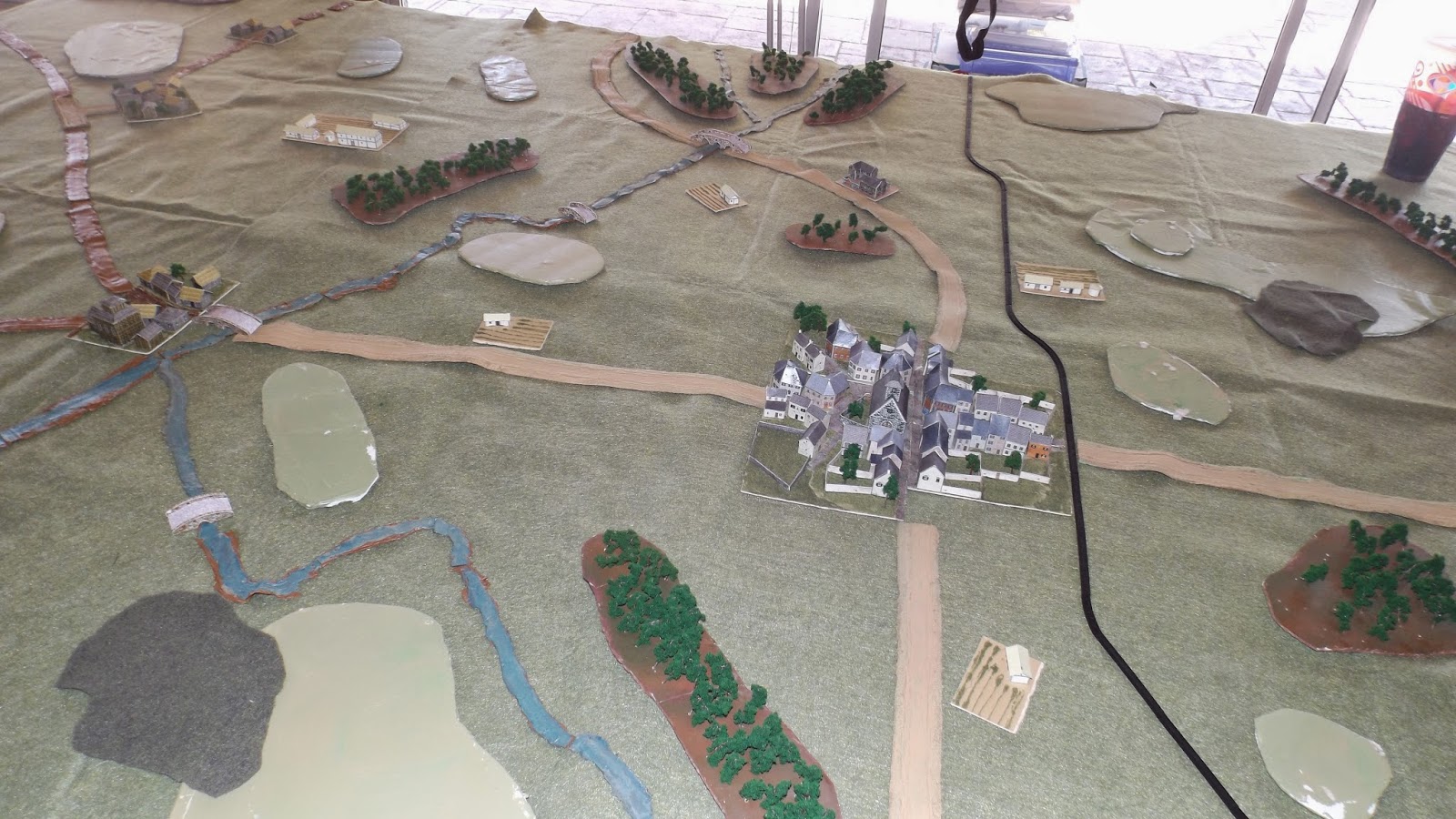 View from the North.

The Ukrainians used hidden deployment and had two sets of dummy counters for every real one.   Their forward artillery observer took up a position in the church steeple in the middle of the city.   The Russians used mobile deployment and entered from the east side of the table.   All Russian units made their first command role, but not all made their second.   Charles had a double one for his first btr battalion on his second command role.   Alan scored double ones for two of his battalions. 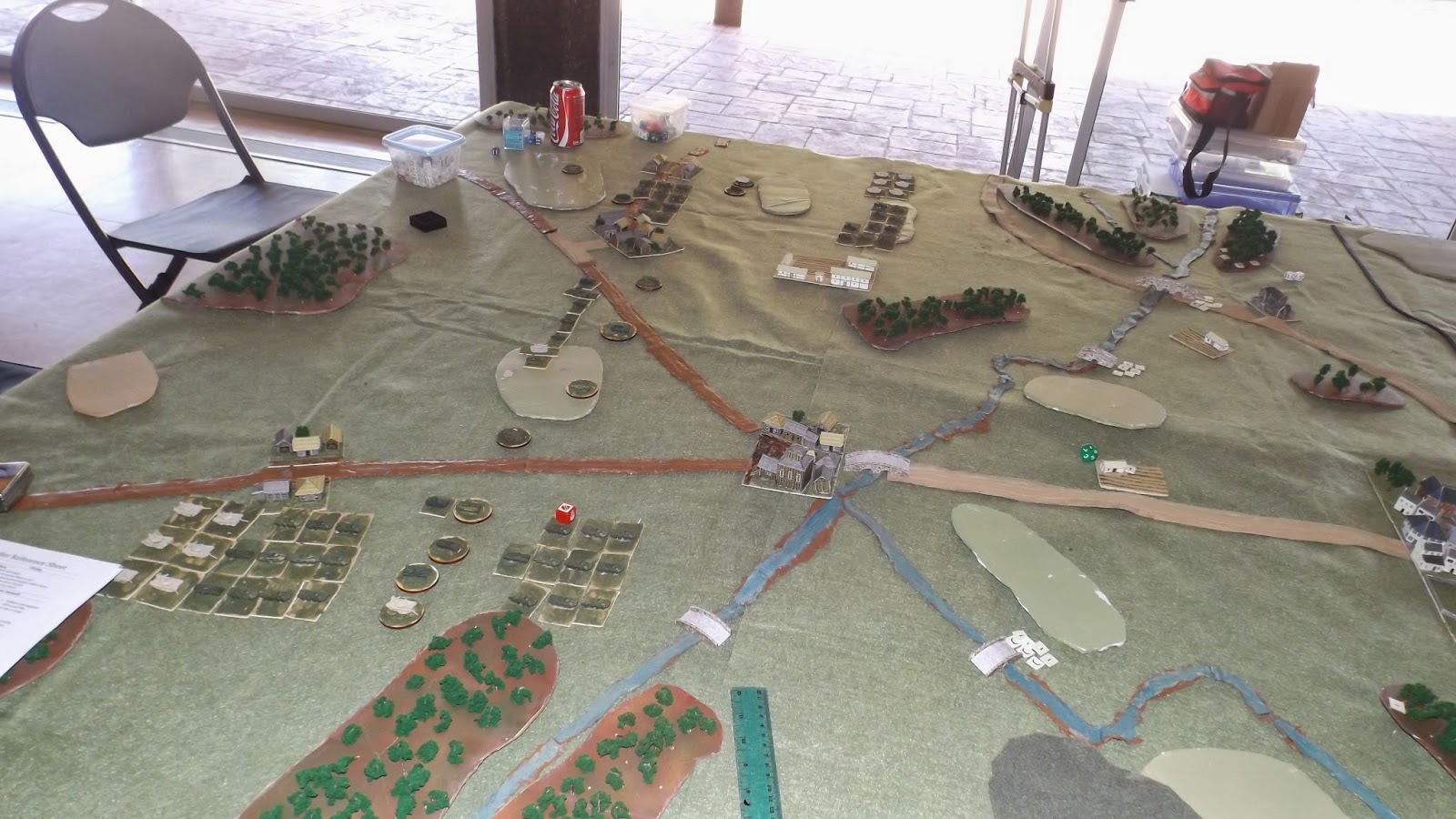 End of Russian first turn.   The Russians had several preplanned artillery strikes, but they were ineffective, landing on areas where the Ukrainians had placed dummy counters. 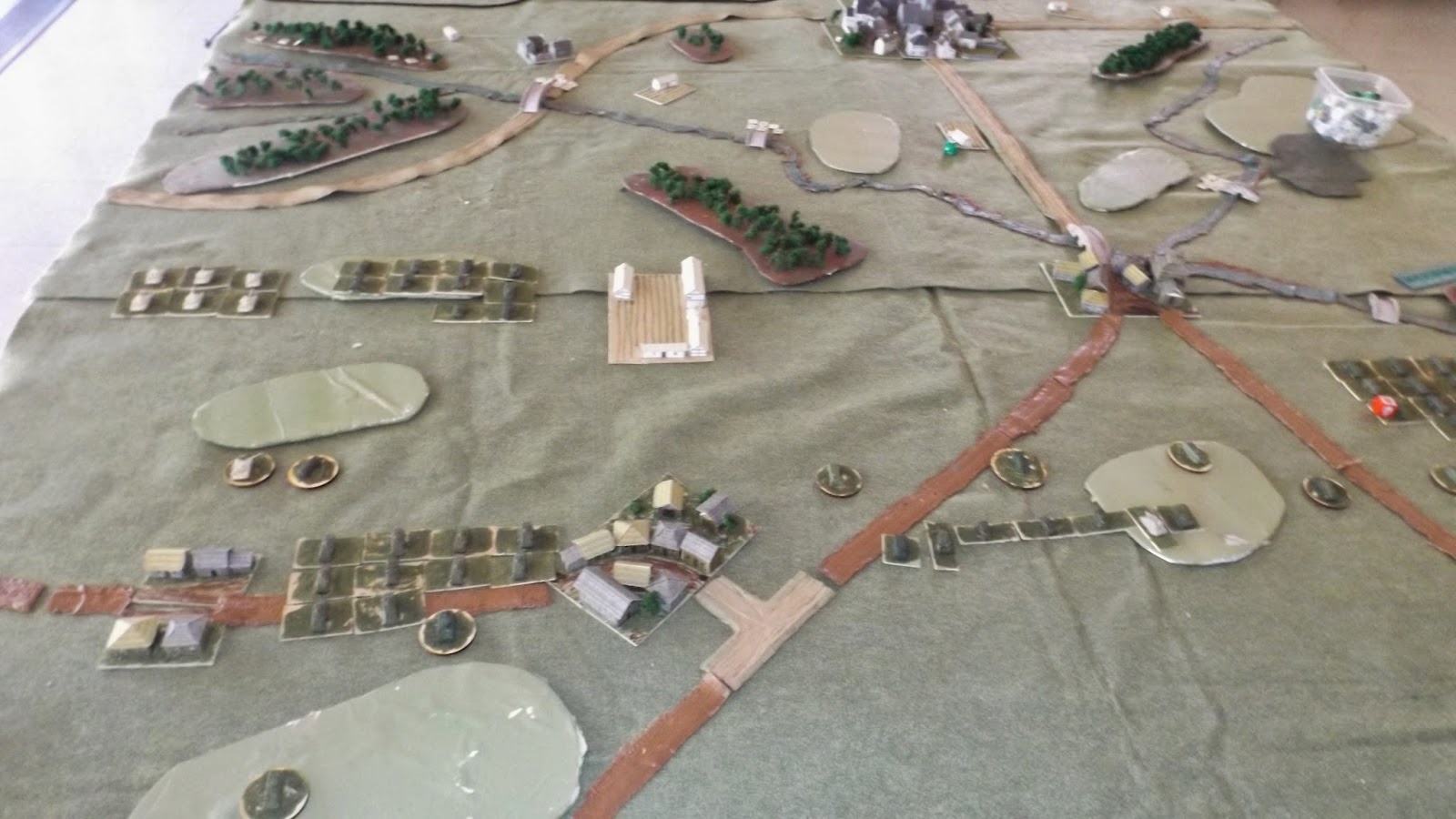 Start of Russian second turn.  The Ukrainians had called their artillery down on the Russian right wing on their turn as their only action. 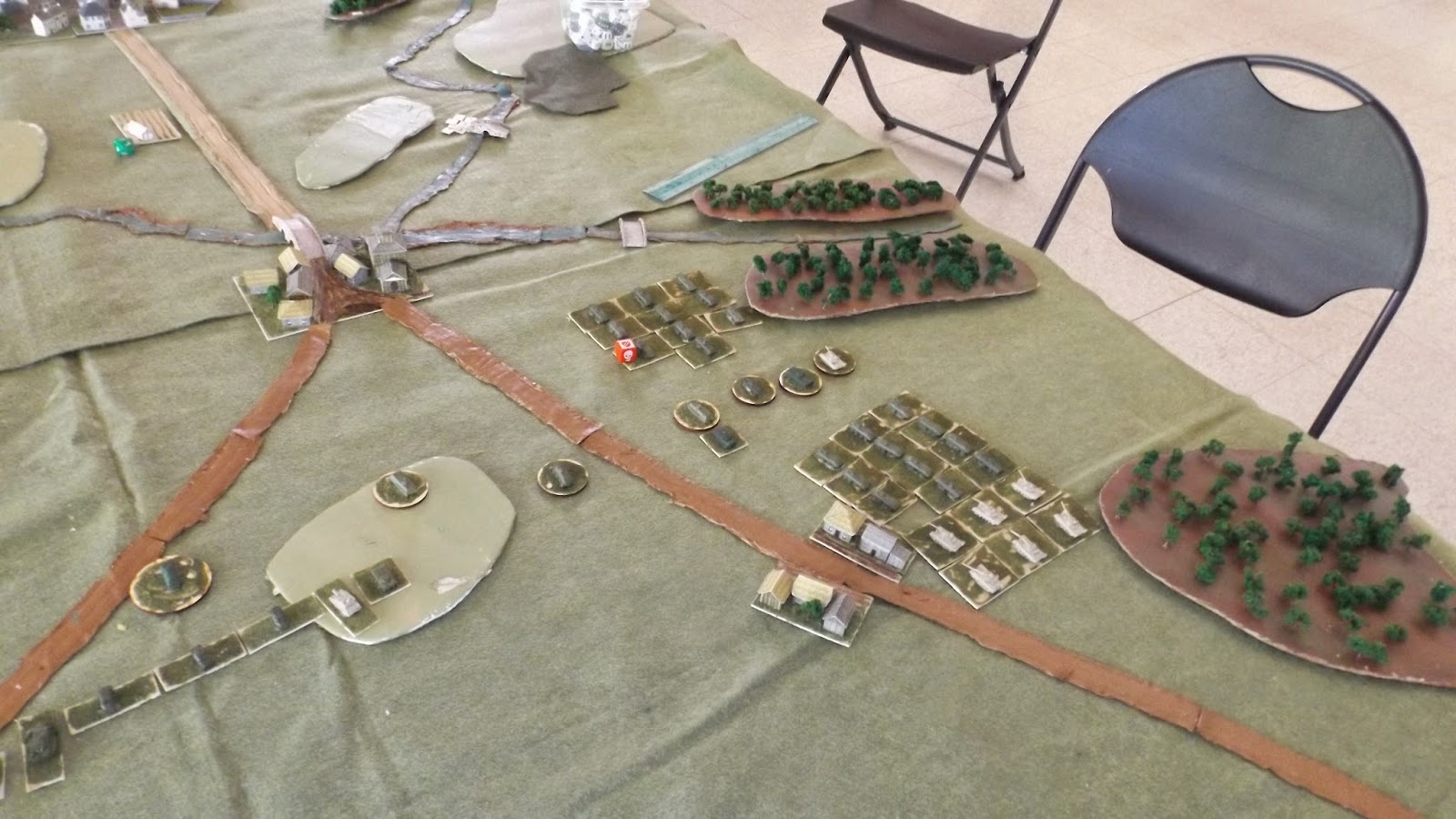 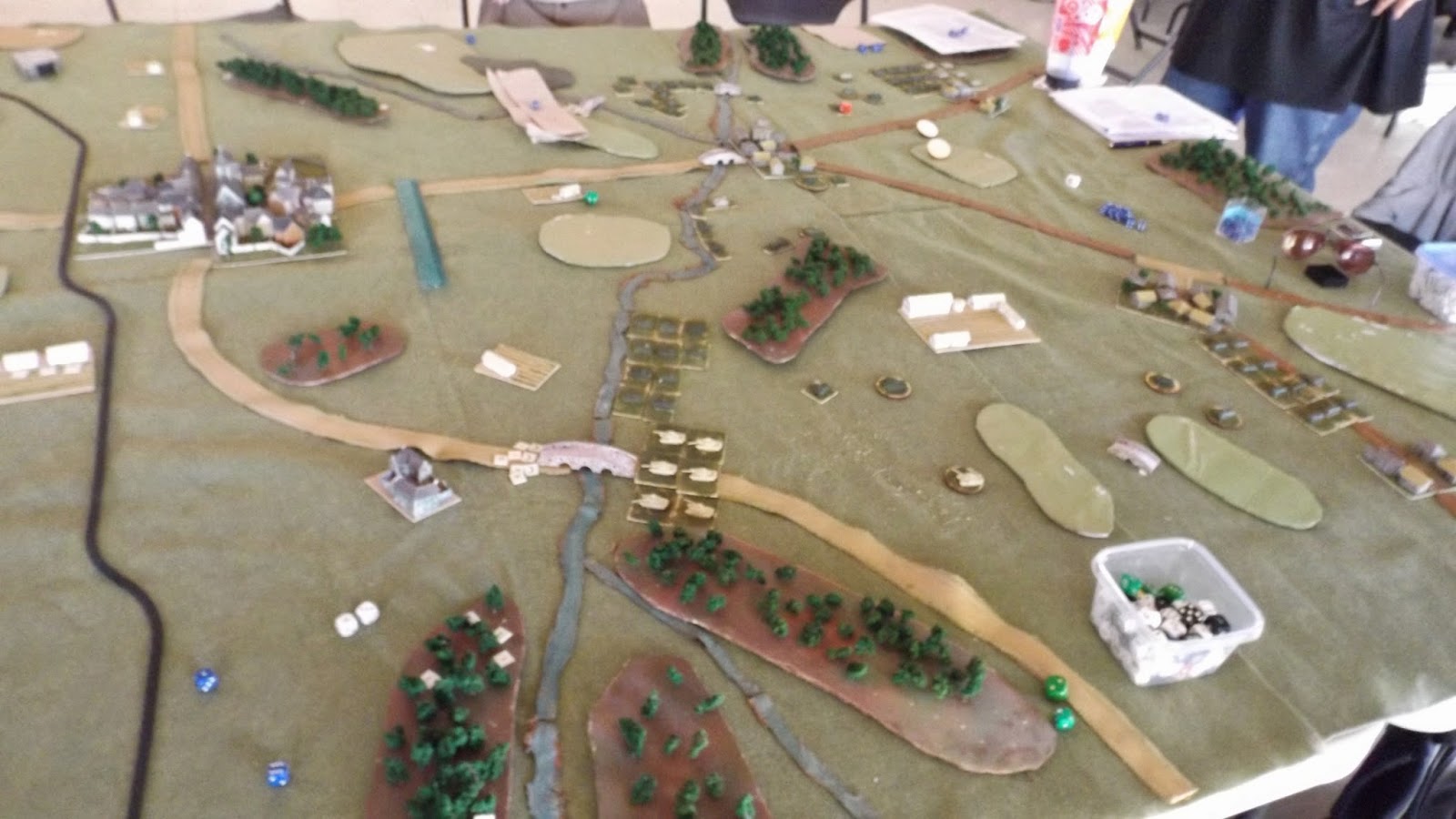 End of Russian second turn.   The Russians experienced command control problems during this turn with only half their battalions being able to advance.   Their left wing has reached the river and is preparing to assault across it.  Their left wing artillery has laid a smoke screen across the two hills to its front. 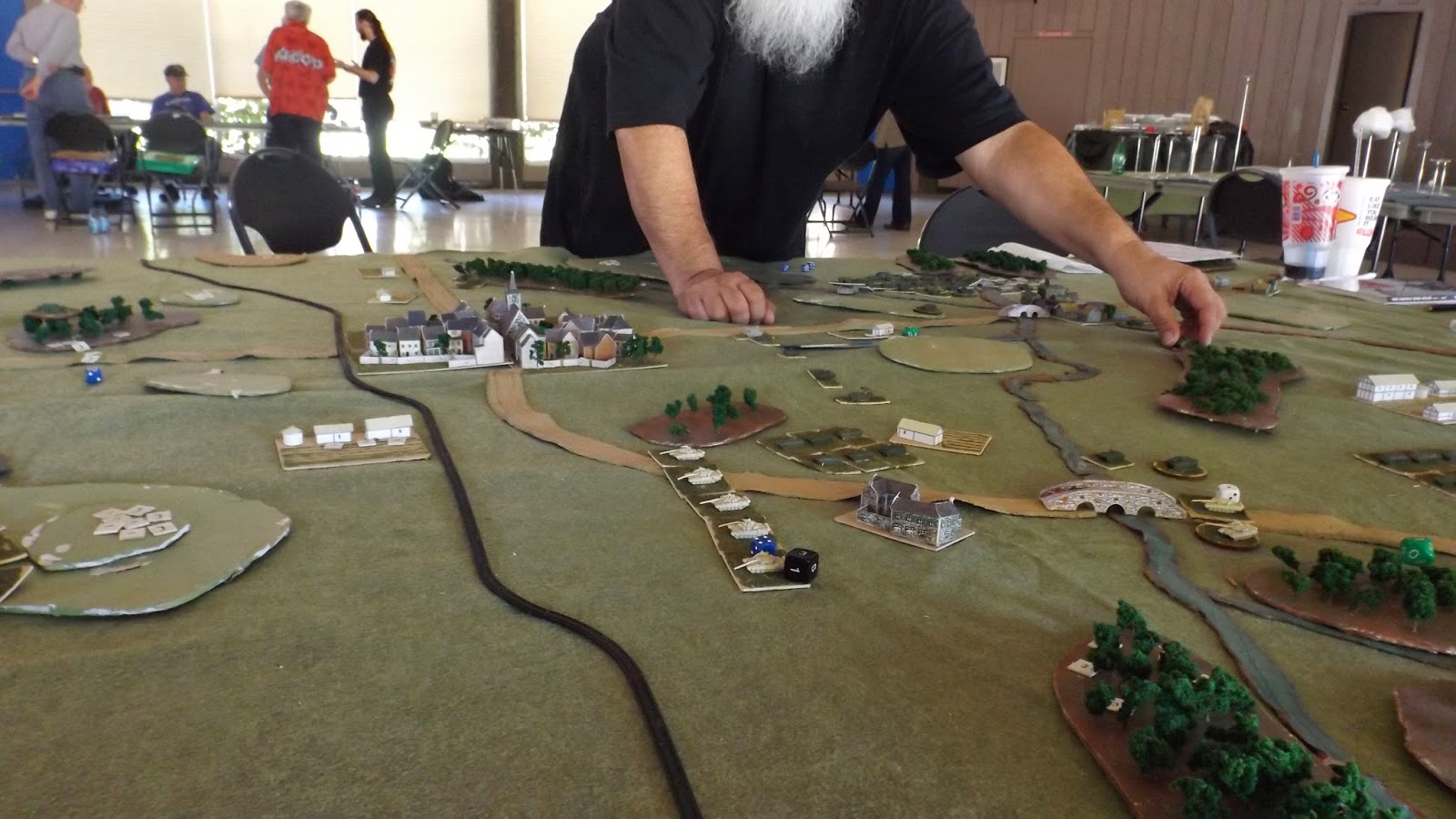 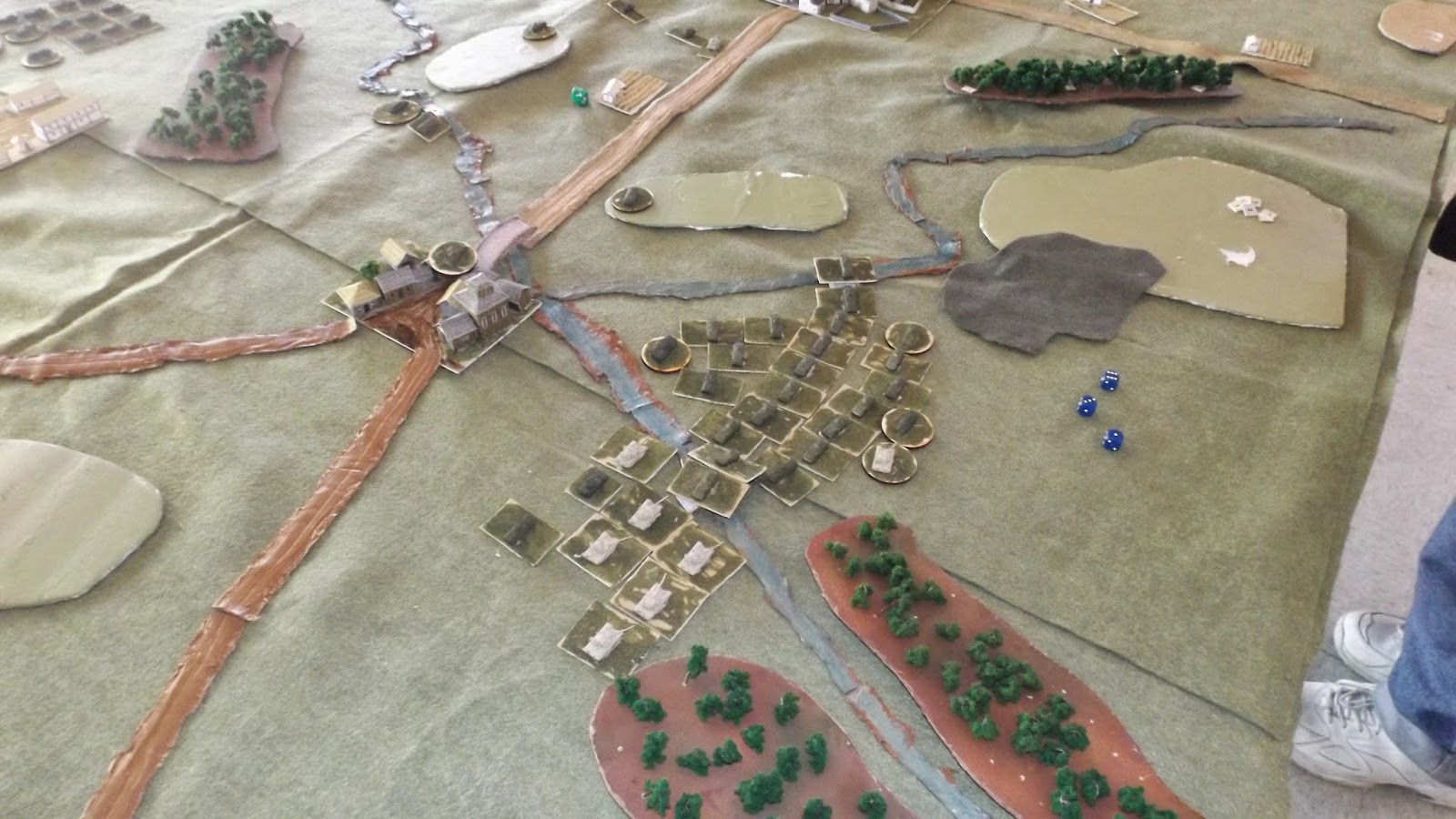 Russian right wing finally advances though it has a massive traffic jam crossing the rivers. 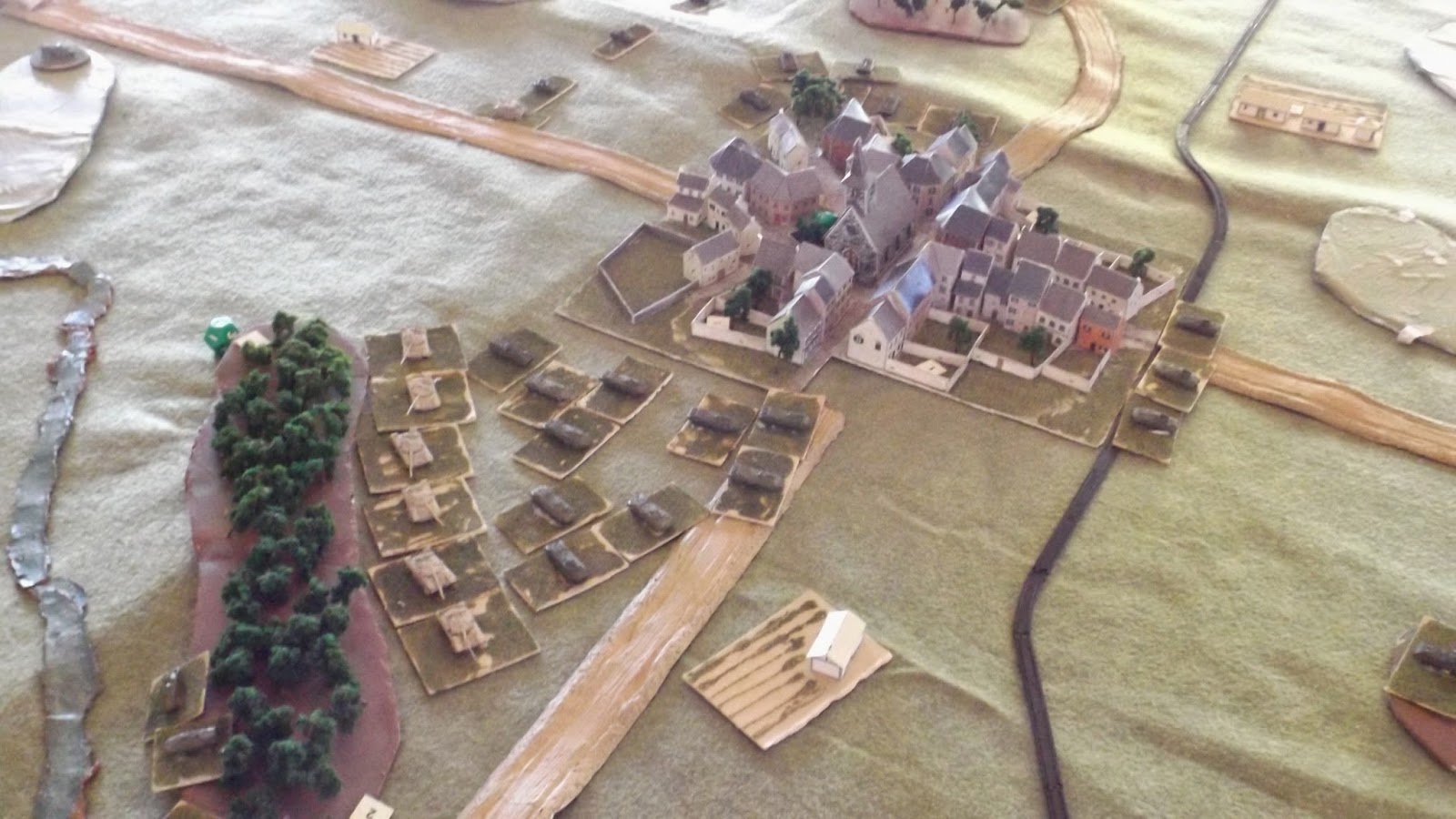 Russian right wing continues its advance.   The Ukrainians have moved an infantry company up to the back of the city. 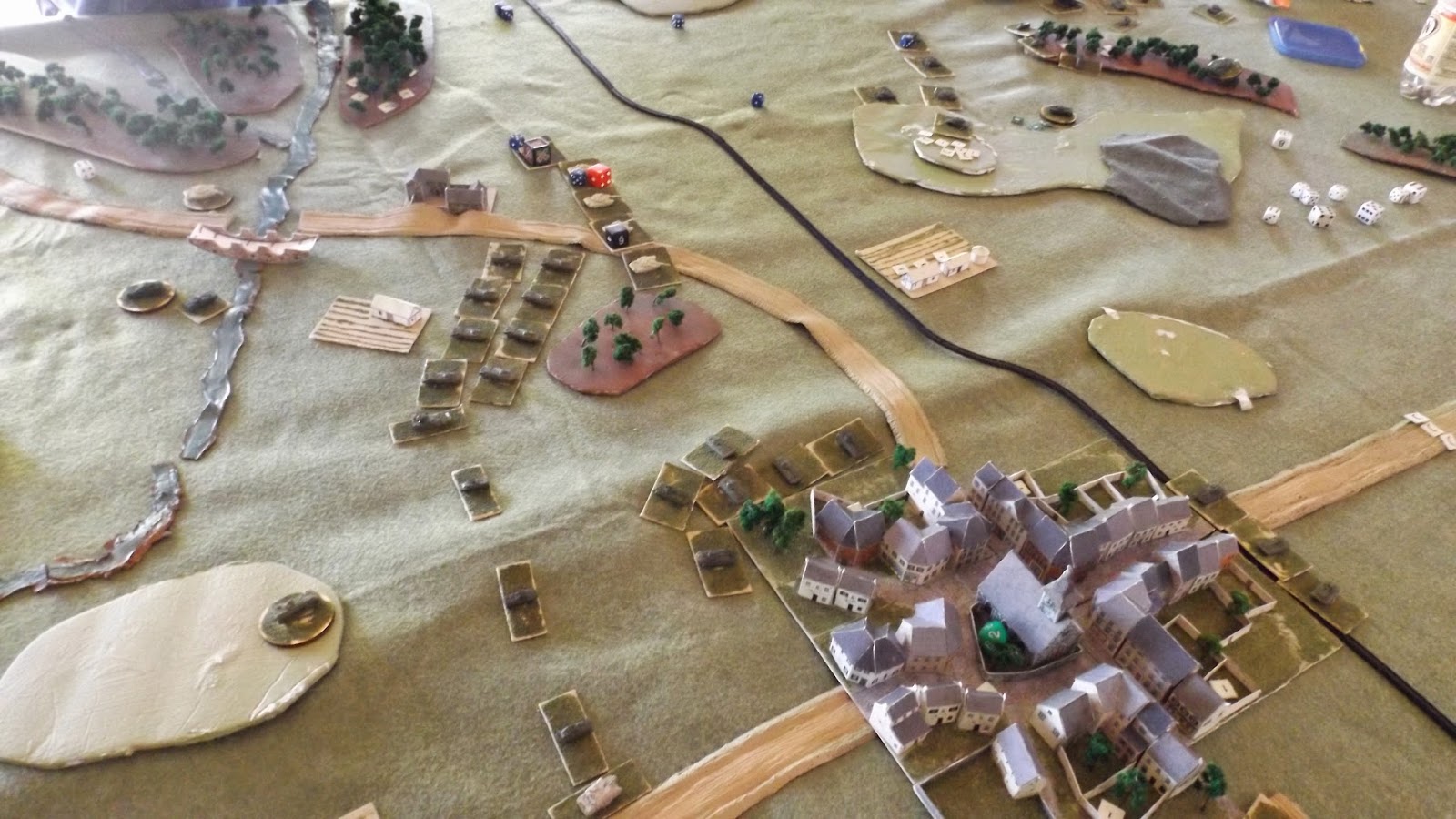 Russian left wing is held up by fire from Ukraine tank battalion and ATGW company.   On the other flank Ukraine recon elements were able to attack the command elements of the Russian right wing eliminating the FAO for that flank, chasing off one battalion commander, capturing another.  Russian defensive fire was unable to stop the charge of the Ukrainians. 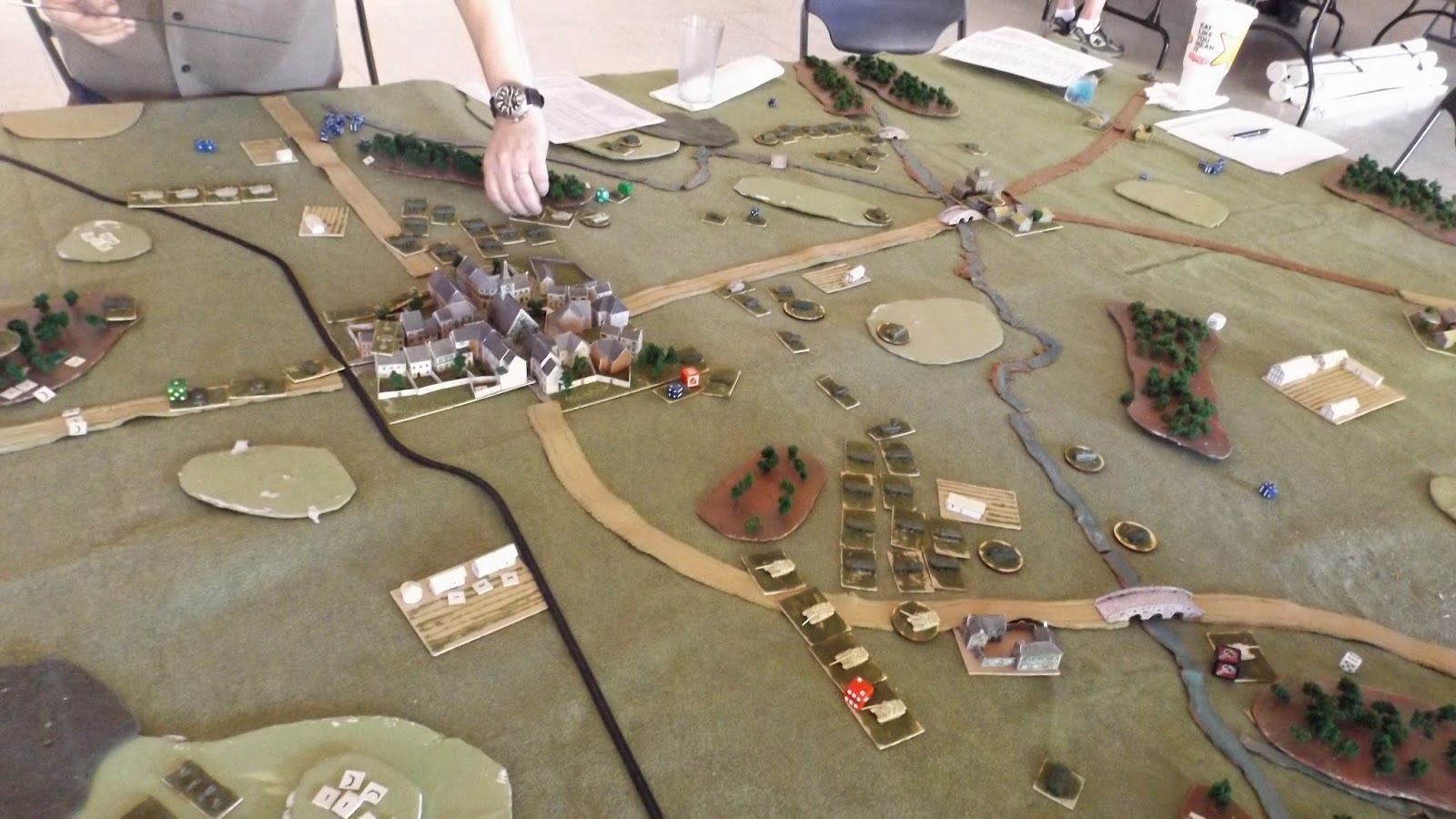 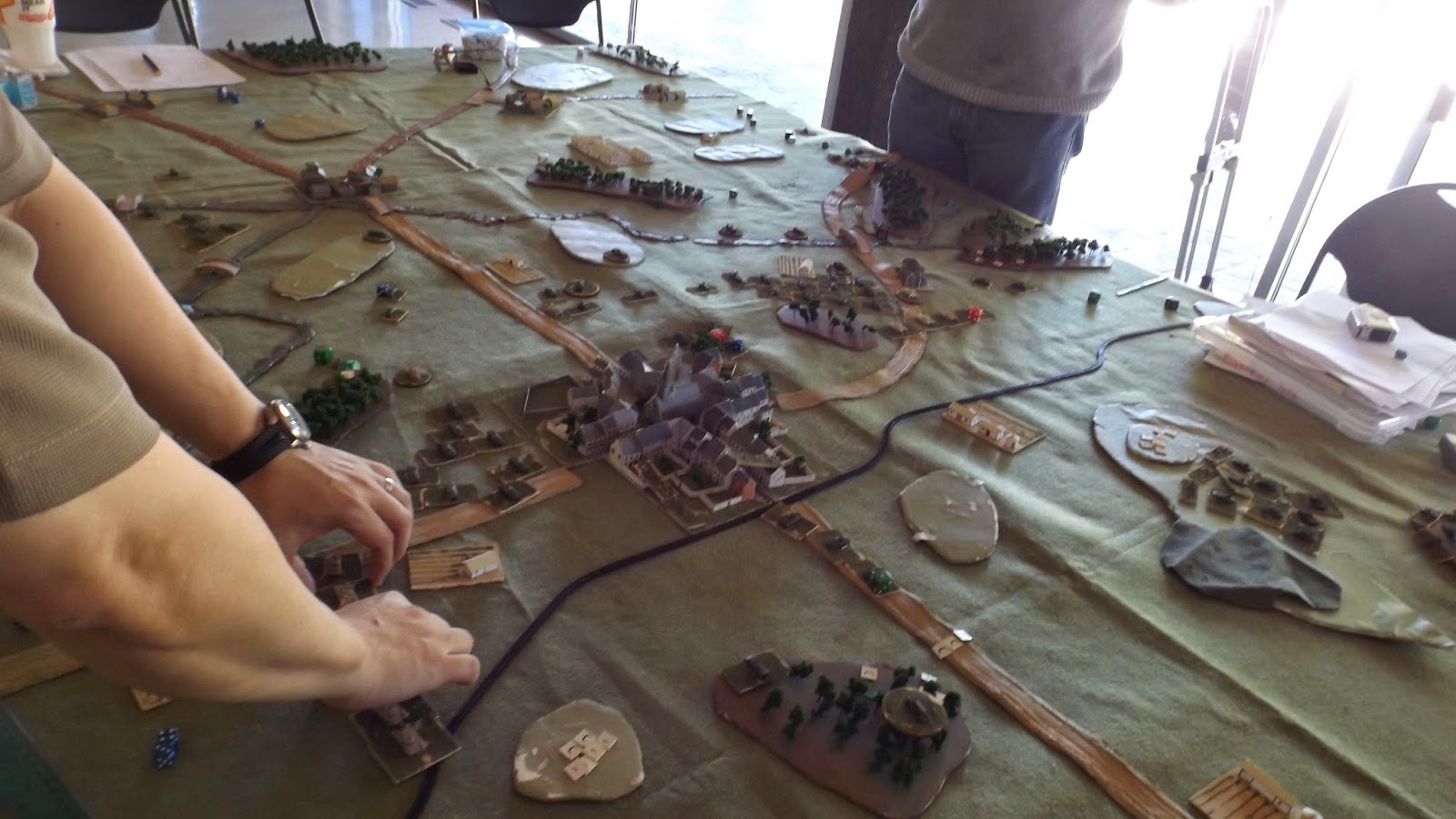 Charles bypasses the town with his intact tank battalion giving the Russians the victory.   Ukrainian infantry in the town would take out part of the btr battalion.   The remains of the Russian bmp battalion were able to capture the church, forcing the Ukrainian forward observer to flee for his life, seeking shelter with the infantry company.

The buildings are from Paperterrain and Roman seas.   All vehicles are from GHQ.   Infantry is Heroics and Ros.  The railroad track is from Hornby.  Trees from Everest Hobbies on EBAY.  Rivers and some roads scratch built using DAP brown mastic.  Other club games that day were a naval engagement, air combat, bolt action, and Seven Years War.

Posted by William Butler at 5:03 PM