The Battle of Montana Libre

I would like to thank all the participants who played in the  March 2nd Cold War Commander game at The GameKastle in Fremont.   This was a battle between two fictional Latin American States.   These were Imaginations that I had created a while back.   They are not intended in any way to represent actual nations and the region was chosen for its wide variety of terrain.

The two nations are the Peoples Democratic Republic of La Cucaracha led by El Supremo Jefe Patronus and the Federal Union of Buena Vista ruled by President for Life Elvis Narcisso.   La Cucaracha uses Warsaw Pact and Chinese equipment while Buena Vista uses a variety of Nato and Israeli equipment.

There were five players in addition to myself.   Since none of the initial arrivals had previously played the rules we fought a meeting engagement.   There were a number of house rules and modifications to the basic rules.   The ground scale and time per turn were doubled, but movement and most of the weapon ranges were kept the same.   ATGW and IATW had their ranges halved, but ATGW vehicles can fire twice in a turn instead of just once provided they get more than one activation.   Instead of adding one die at half range the number of dice was doubled except for ATGW/IATW.  This was done to speed up the game and to make it more possible to knock out tanks.  Some of the armor and save values were also modified.   See http://18clovehamhock.blogspot.com/2013/02/cold-war-commander-hits-and-saves.html for the number of dice needed to have an average chance of knocking out units with various save and hits.  The post also has a link to a site with data that I used to modify some of the hit/save numbers for some vehicles.  A number of western IFV's and tanks have had armor upgrades that allow them to have saving throws vs ATGW and IATW.   Even with the long range missile advantage of the T90 tanks the La Cucaracha players sought to close to half range in order to have a better chance of knocking out the Leopard 2A6's of the Buena Vista army..

La Cucaracha was faster at deploying so got to move first each turn.    Their forces consisted of the 1st Motorized Infantry Brigade (re-enforced) and the 3rd Tank Brigade.   These were chosen by a random draw prior to the start of the game by the first two players on the La Cucaracha side from a selection of 8 different brigades.   The Buena Vista forces were the brigade equipped with West German Vehicles.   When Manny showed up he joined the La Cucaracha side and an additional CO unit was provided for the 1st Brigade troops.   The 1st Brigade had two tank battalions, one BMP battalion, three BTR battalions, one 122mm SP artillery battalion and some brigade troops.   The 3rd Tank Brigade had three tank battalions, one BMP battalion, one 122mm SP artillery battalion, and brigade elements.   There was the possibility that there would be additional artillery and air support, but the die rolls for those were unsuccessful.  After die roll adjustments the air superiority rolls were equal.  The Buena Vista forces also failed their die roll to get additional artillery support

The Buena Vista forces were two tank Battalions, one Puma battalion, one Boxer battalion, two artillery battalions, and various brigade troops.   The Buena Vistans had two brigade groups and were able to distribute the companies and platoons amongst the various HQ as they saw fit.

The La Cucaracha army entered from the north side of the table with the 3rd brigade on the right and the 1st brigade on the left and center.   The first brigade's advance eventually bogged down as casualties mounted.  The right wing Buena Vista battle group decimated the BMP battalion.   There were a couple of turns were the initial command roles for some of the La Cucaracha 1st Motorized Brigade battalions failed and they were unable to move forward.   Only one blunder was rolled during the game.   This had little effect as only one platoon of the center tank battalion on the La Cucaracha side had to retreat.

On the other flank the La Cucaracha 3rd brigade started out with a slow advance, but then scored several activations in a row and quickly assaulted the hill and village on the west end of the table.   The 3rd gave as good as it got losing 5 platoons, but knocking out 5 of their opposing platoons.   After four hours the game was called as several of us had to be heading home.   The game was judged a minor victory for the forces of La Cucaracha as they had a strong superiority in numbers on the 3rd brigades flank and were likely to break through on the western edge of the battlefield.   There was little possibility of either side making further headway in the center or eastern side of the battlefield, though it was possible for a company of Buena Vista Leopard tanks to be sent from the eastern part of the field to the west. 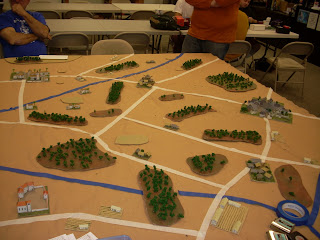 View of the battlefield from the south end of the table. 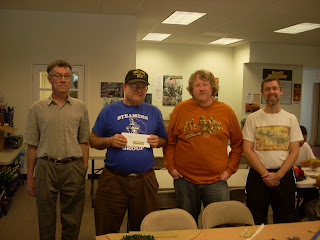 Dan in blue shirt who stopped by and the first three to show up for the game.  Gregg and Manny would arrive a bit later 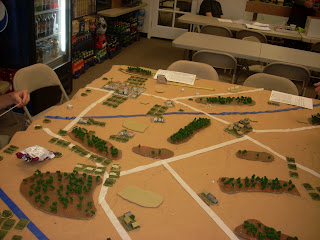 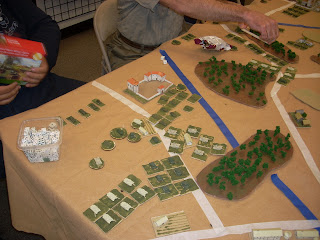 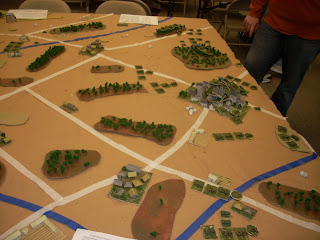 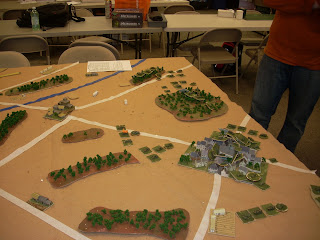 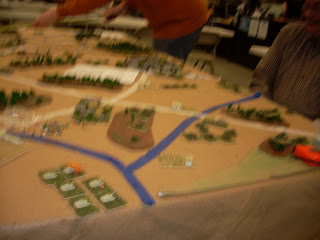 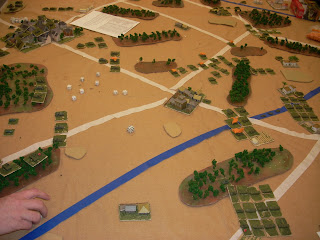 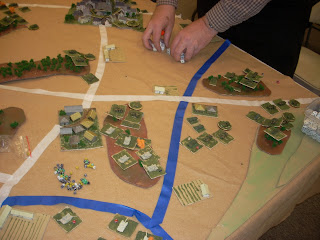 The south end of the battle.  Fight for the hills.  Hidden behind Gregg's hands is a hill with a Leopard company on it.  This company would have the worst hit record of the battle. 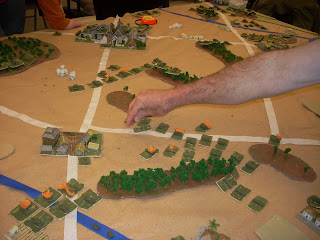 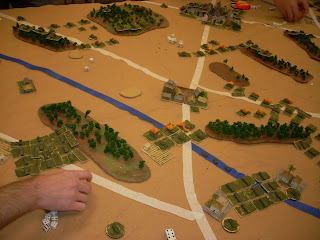 Same area.  The BMP battalion would lose 2/3rds of its strength in a couple of turns. 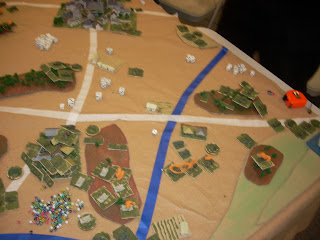 The fight for the hills intensifies as both sides take losses.  Initial assault by BMP battalion against town is thrown back.  Manny's attack with the 3rd Brigade would tip the game in favor of the La Cucaracha armed forces earning them a minor victory. 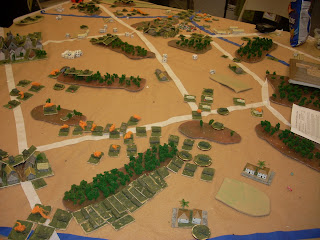 The remains of the BMP battalion.  The battalion commander, Colonel N. Harwood, would be demoted to a desk job. 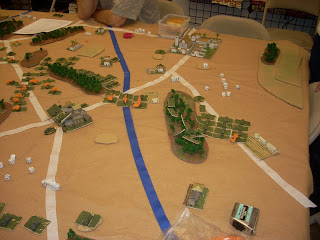 1st Motorized Brigade advance stalls with half the tanks in the left tank battalion destroyed. 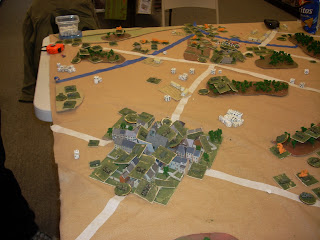 View of the city occupied by Buena Vista infantry.   End of the game