Home Made Rivers and Roads

After reading about making roads with caulk, I decided that I would try doing so myself.   And if roads could be made then so could streams and rivers.   I have some commercial latex roads that I bought a while back and while they are good none of the commercial rivers were what I wanted.   Usually they were too wide and too regular in width.   The caulk that I used is made by DAP and is available in several different colors.   I decided to try the lighter brown TAN color. 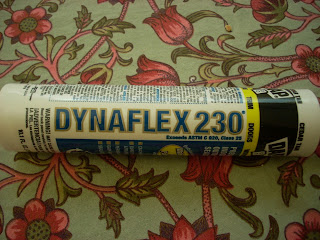 I taped some clear plastic wrap to the top of the patio table and using a caulking gun squeezed out a single bead for streams and multiple beads for roads and rivers.   I had a couple of hard plastic parts bin dividers that I used to smooth out the roads and streams.  Fortunately they had a tab that could be removed from one edge making a 2cm (3/4 inch) wide opening which was just the right width for roads.  After letting them dry in the sun for a few hours I turned them over and let the other side dry for a few hours.   The following three pictures show several stream sections drying. 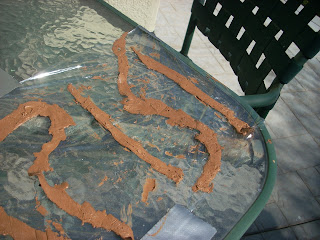 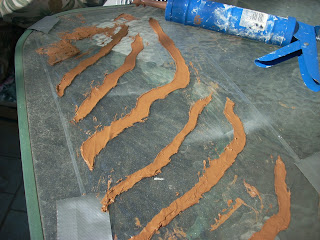 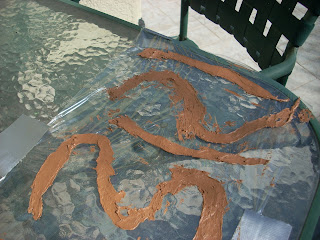 After the streams had dried I first painted them with GHQ field grau and then immediately went over them with GHQ sea blue.  This gave them a greenish blue color that varied instead of being the same along the length of each section.  The final photo shows two unpainted road sections and a couple of stream sections.  The bridge is from the PaperTerrain 6mm stone bridge set.   They have two different bridge sets and they are available in a couple of different colors.  One set is sectional lengths that can be used to create bridges of different lengths and the other has arched  bridges in three different lengths and a pontoon bridge.  After painting I used some scissors to trim the ends and to cut the ones with multiple bends into shorter sections. 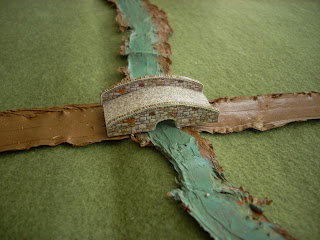 Posted by William Butler at 9:10 AM

Good idea. Perfect for when you need something to order.