I spent part of the last couple of weeks re-basing and re-painting my science fiction armies.   Most of the vehicles are from the plastic Renegade Legion Cohort packs while some are from the old plastic Warhammer 40k epic sets.   They are being used for a far future space setting called Human Space.

Human space is divided between the Pantharii Imperium, The Federation, The Domain and several unaligned planetary systems.  The Pantharii Imperium, The Federation, and The Domain are almost exclusively human settled planets.   The Unaligned Worlds region has planets settled by humans and various aliens.   There is also an outside alien race that has sent raiding and invasion forces.  The volume of space is about 70 parsecs from side to side, 110 parsecs from top to bottom and 40 parsecs deep.  There are also a few planetary systems that have ruins from an ancient advanced civilization. 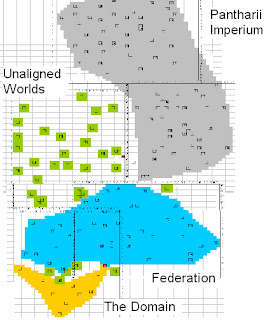 The greatest danger to the region are the aliens from outside it.  These are humanoid in shape, but with a bluish skin color, white hair, yellow-green cat like eyes, and sharp pointed teeth.   All attempts at communicating with them have failed.   Their spoken language is unpronounceable by humans and is in the ultrasonic range.   They seem to have a ridged, traditional structure to their armed forces.    Since their actual name for themselves is unknown they have been called the BluMe'Nes. 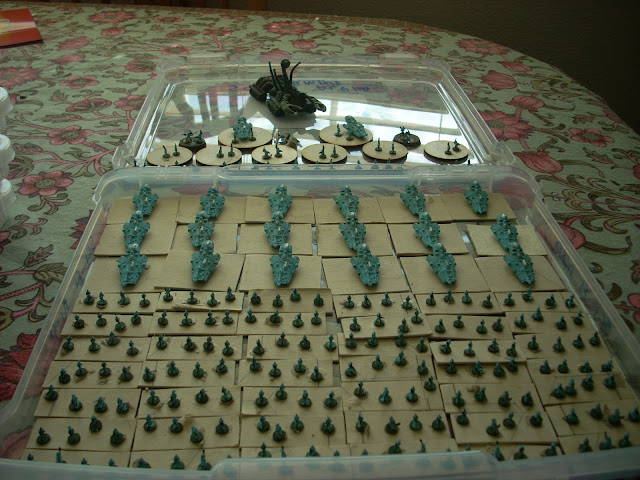 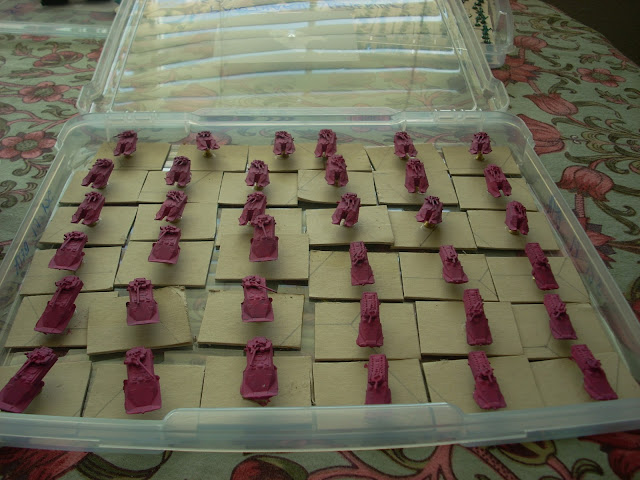 Part of the Pantharii Imperium armor.   These were painted pink per my Daughters request.  The vehicles are from the Renegade Legion TOG cohort set.  And yes they are the Pink Pantharii %) 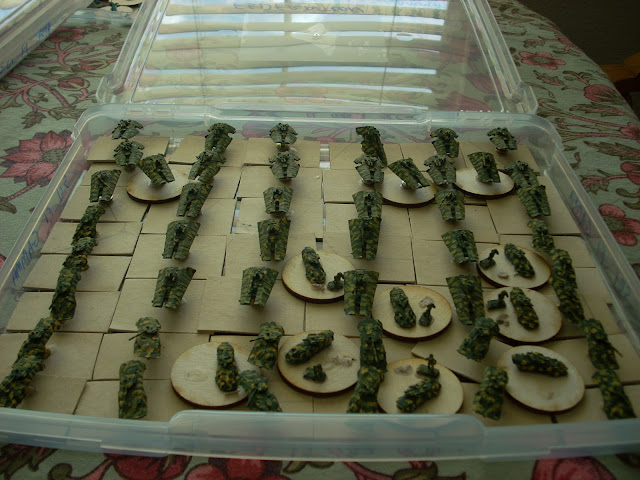 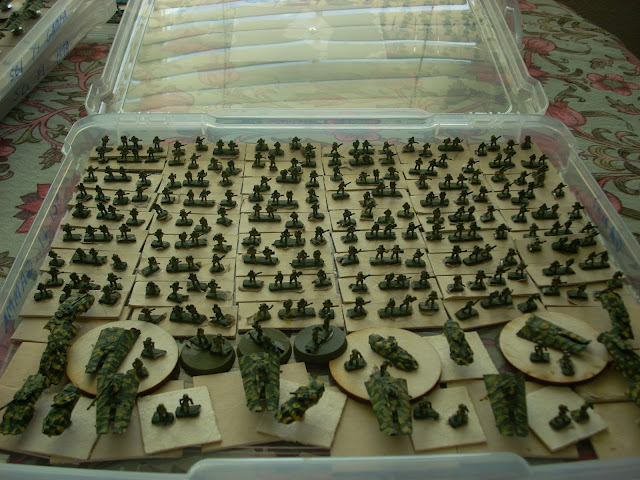 Federation armed forces.  Vehicles are from the Renegade Legion cohort set.  Infantry are from the old FASA Mechwarrior range.  The color scheme is a green base with yellow camouflage markings for both the vehicles and the infantry. 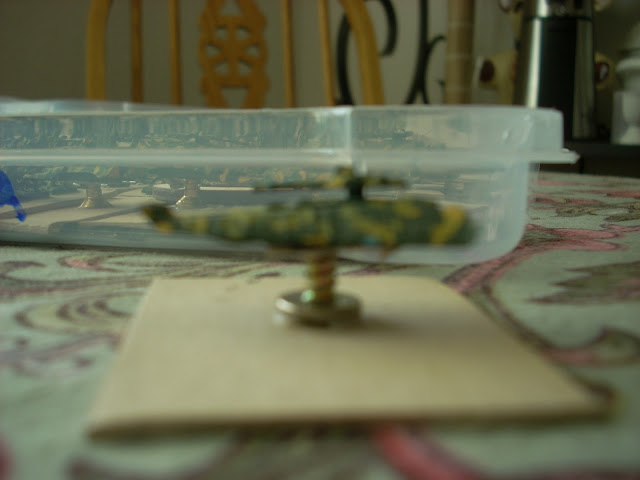 A somewhat fuzzy closeup of one of the Federation vehicles.

I found the cases on Amazon.   They are available individually or in packs of ten.   The individual price is rather expensive and is about twice the cost per case if bought in a pack of ten.   The pack price is about $32.  They inside dimensions are about 10 inches by 12 inches (250mm by 300mm).   They can also be stacked.

At this time I am still deciding on what type of terrain to model on the bases.   I still have to finish re-basing the Ground Zero Games infantry that I will be using for the Pantharii Imperium.   The Domain forces are the old Warhammer 40k epic Imperial Guard and I have not yet decided on a color scheme for them though they have been re-based.    I will also have to purchase some vehicles for them.

I did convert the Renegade Legion Vehicles to Future War Commander.   The renegade Legion rules for armored combat were very tank happy.  The information can be found on the Blitzkrieg Commander website download page under Renegade Legion.   http://www.blitzkrieg-commander.com/Content/Downloads/default.aspx   Most of the vehicles have a turret mounted cannon and laser.   If the target is in range of both weapons their attack values can be combined.   They cannot engage separate targets.   The ones with hull mounted cannons can engage a target with both the cannon and the turret mounted laser or can engage separate targets with each.   Renegade Legion vehicles are armed with almost every system you can imagine.   In addition to the cannon and laser, they also carry guided missiles.   Some also have anti-personnel weapons and/or anti-aircraft weapons.  CinC still makes the Renegade Legion vehicles http://www.pfc-cinc.com/rl.html

That's very great site. It’s so interesting and very useful article. I like the way you explain the things. Keep posting. I really thanks for this.
Self Publishing Tips
Self Book Publishing

Your post is really good providing good information.. I liked it and enjoyed reading it.Keep sharing such important posts.


That's very great site. It’s so interesting and very useful article. I like the way you explain the things. Keep posting. I really thanks for this.

This is an outstanding posting, and i also can trust what was written here. I will be back to check out more of your articles soon. Many thanks


I should really be working instead of reading your blog on it controls.

trade in fur for money

I sat down for a whole 10 minutes tonight and undertook a quick summary of what I had on the go. This was partly brought on by Doug’s post about his WWII Germans. So, apart from several bazillion Russians (where did all these T34s come from), here in sunny Singapore I also have two Future War Commander forces awaiting paint, two Squadron Commander sides, 6x6mm DBA armies, 2x15mm DBA armies and a DBMM army of some 400 points that I was trying to get completed for Cancon 2012 but think I will fail on that one.

Future War Commander is an exciting wargame that allows you to re-create battles of the future using miniatures on a tabletop. Command anything from a company right up to a division and get a result in 2-3 hours without becoming bogged-down in detail. Suitable for any scale miniatures from 2mm right up to 28mm (including 6mm, 10mm, 15mm and 20mm) and no re-basing is required.

The rules come as a 140-page A4-sized book (either a print-on-demand monochrome book or a full-colour electronic PDF document) with over 60 pictures that illustrate how to play the game. These feature real miniatures as you see them on the gaming table. You also get a double-sided A4-sized quick reference sheet.

I've heard on the grapevine that an established 15/20/28mm Uk manufacturer is about to launch their first 6mm range of 'human' sci-fi vehicles.

This range of over 100 vehicles and aircraft is set to be officially announced for Salute 09 but we may see sneak peeks beforehand.

I will likely need to revisit and browse your potential article content.... :)

Comment removed due to being totally false statement about the models depicted.