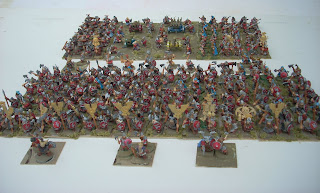 One of my projects this summer was to finish painting and basing my 28mm dwarf army. Most of the figures are from Games Workshop. Others are from various games or other manufacturers. All items are plastic. They have participated in a number of battles over the years. The army has ten units of warriors, five units of missile troops and four artillery units. For the rules they normally fight under this would be about 15,000 infantry plus generals, heroes and guns. Paints used for this project were Vallejo and various acrylic types from Marshalls.
I should also note that we don't use GW rules.