I had been looking for some figures to use for the aliens who are harassing the rift frontiers (right edge of the map of human space in an earlier post) of the Pantharii, Domain, and Federation.  I had looked at the Ralnai and Klackon ranges for Starguard, but decided against them.  Last week, I was browsing through Khurasan Miniatures 15mm sci fi range and found what I was looking for.  These were the Soriog.

They are slightly shorter than the 28mm sci fi figures.  I placed the order on Monday and they arrived on the Saturday.  Kudos to Khurasan for speedy delivery.    For their environmental suits, I painted them light khaki, and used a medium brown for their weapons.  They were given a bright blue skin color for their faces and other parts of their warlock (a psionic).   The humans refer to them as the "blue meenees".  They have a prehensile tail, hands with a thumb and two fingers, and a raptor talon on their legs.

Wiley games printed a book of various sci fi races and I chose the Aeldarin for their characteristics.  These are based on not-space elves.

The figures are organized into four squads of ten.  Consisting of a squad leader, seven other laser rifle armed infantry, a heavy laser, and a flamer.  There is four figure command team consisting of the commander, a warlock, and two junior officers. 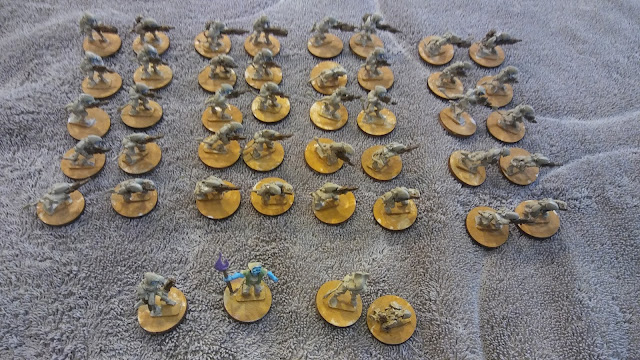 The four squads with the command team in front. 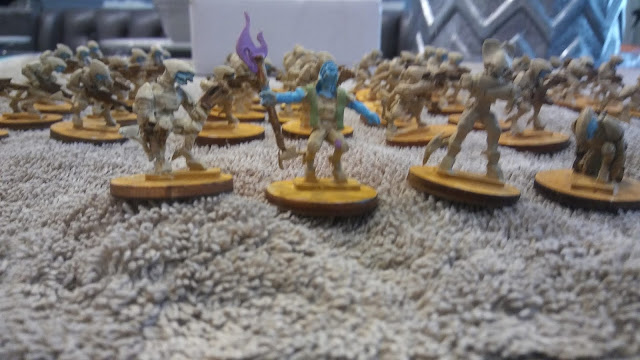 The command team.  From left to right a junior officer, the warlock, the commander, and the other junior officer.
Posted by William Butler at 11:47 AM