Galactic Heroes: Hostage Rescue.Game at the South Bay Game Club on May 11th.

Played a game of FfoL:  Galactic Heroes at the South Bay Game Club on May 11th.  The scenario had Doctor Plancktohn, assisted by Karen and his minions, holding Princess Pearl prisoner in castle Bas de Bikini.   The rescue force was to be airdropped on the castle.

Three of the four teams landed in the courtyard while the fourth team landed outside the back side of the castle.  The teams inside the courtyard immediately came under fire from minions stationed on the balcony overlooking the courtyard and the upper floor of the gatehouse.  Return fire had little effect.  One of the rescuers raced up the stairs leading to the upper floor of the main part of the keep while this was happening.  The team outside the castle attempted to get a grappling hook onto the top of the castle wall, but failed to do so.

On the ;second turn he opened the door only to be fired upon by three minions stationed behind it as they chanted "All hail Plancktohn.", taking two wounds  A team member with a rocket launcher fired a missile into the doorway from the courtyard scoring a direct hit taking out two of the minions, but also causing a shock hit on the guy outside the doorway.  Other team members rushed up the stairway, while the second team headed for the gatehouse.  The third team came under fire from more minions who had moved out of the tower onto the south wall of the castle.  Return fire killed two and put a chock marker on the third.

The third turn saw the surviving minion on the wall run into the main part of the keep.  The team that had fired on him broke into the lower part of the main keep.  Outside the castle the team was attempting to scale the walls, but was failing miserably with the first two guys loosing their grips and falling resulting in one being wounded and one being killed.  By the end of the fourth turn the surviving team members had managed to scale the wall and were preparing to break into the upper level of the keep.  The team leader of the group that was climbing the stairs took out his chain sword and proceeded to slice and dice the remaining minion who was blocking the door.  As the other team members entered the keep they came under fire from the far end of the hall from the minion who had run into the keep.  The minion's fire had no effect and return fire left him dead.

Meanwhile at the gatehouse the lead team member broke down the door leading into the corner half of the gatehouse, but as he broke down the door three minions inside the building opened fire killing him.  The other team members came up and fired upon them killing two.  On the following turn minions in the other half of the gatehouse opened their door and fired at the back of that team, killing another team member.  (we had been forgetting to do the new armor save rule which may have prevented some of the losses).. The rest of the team fought their way into the corner part of the gatehouse as the minions from the upper floor came down the stairs.  After several rounds of fierce hand-to-hand combat the team was able to eliminate the minions inside and outside the gatehouse while taking a wound and some shock markers.  The combat saw several fumbles on both sides.

Inside the middle level of the keep the team leader rushed out onto the balcony with his chainsword killing two of the three minions.  The third minion would turn out to be much tougher as poor die rolls by the commander saw the minion winning several rounds of combat before finally being dispatched.  On the lower level that team advanced through the rooms and eventually became engaged with the minions guarding the kitchen in the northwest corner of the keep.   On the upper level of the keep the team that had scaled the walls was clearing the rooms finding they were unoccupied.   The team on the middle level found more minions in the dining hall.

After clearing the keep and gatehouse the teams prepared to descend into the cellars of the castle.   They had been fortunate to acquire some aces on the previous two turns and had used them as Queens of Hearts to heal the wounds that some of the team members had received.  However, Dr. Plancktohn, Karen, the prisoner, and the three surviving minions had fled through the escape tunnel.  Overall the mission had been a failure.  While 21 of the minions had been killed, the rescuers had lost six out of 20 men and failed to free the captive.

Several pictures of the castle taken the day before the game.  The castle was constructed of cardboard and mailing tubes with paper overlays glued to the walls and floors.  Some 28mm  figures for scale.   Each floor is four inches tall. 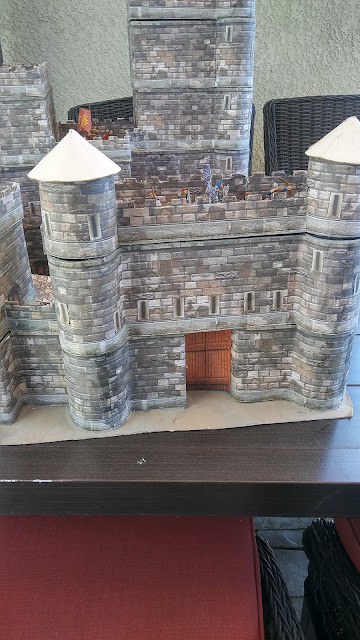 The east side of the castle showing the gatehouse 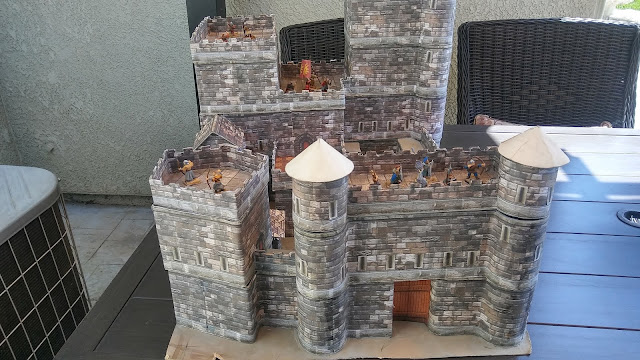 An overall view of from the east. 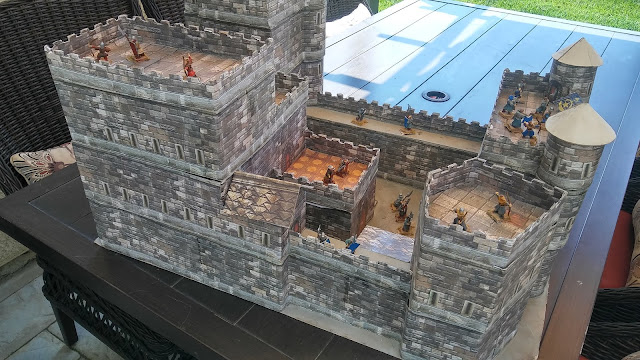 The south wall of the castle 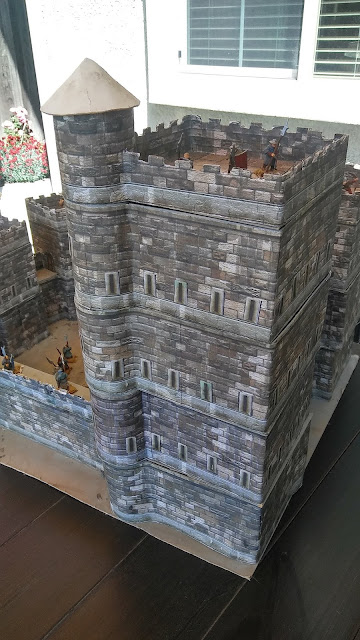 The northwest corner of the castle 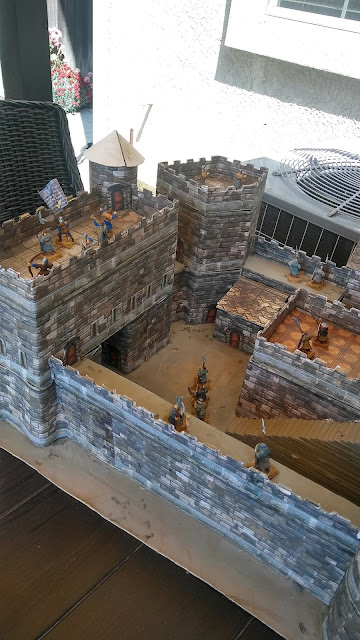 The courtyard with the balcony overlooking it on the right. and the stairway just below it. Lower level of the keep as one of the teams attempts to fight its way into the kitchen.  The minions have the yellow armor and the rescue teams are in blue-grey camo armor. 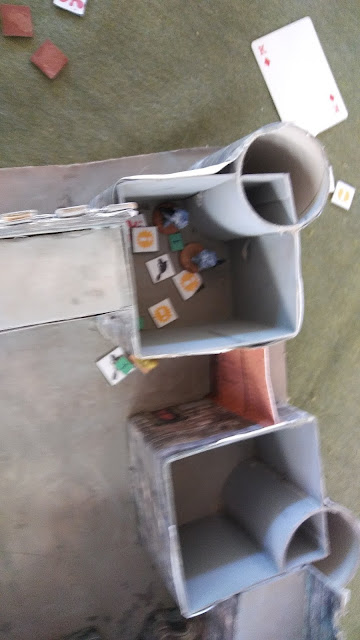 Fighting inside the corner of the gatehouse. 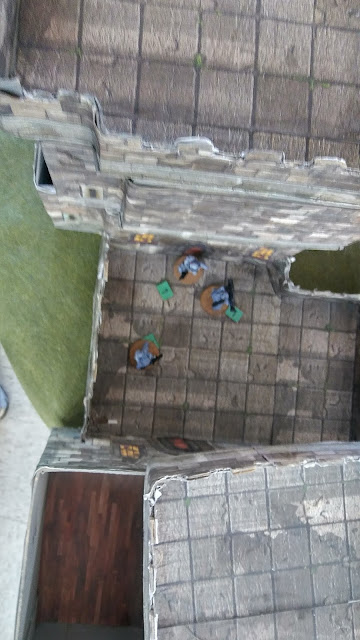 The team who had scaled the outer wall of the castle.  The green markers indicate figures who have completed their actions for the turn. 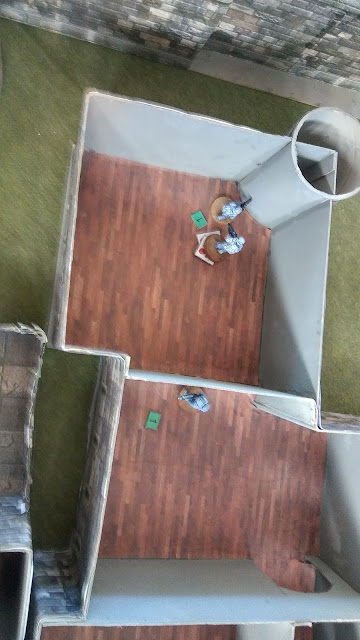 Clearing the middle levels of the keep..  All the round towers had stairs leading to the different levels of the castle.
Posted by William Butler at 11:54 PM