Manny Granillo hosted a game of PanzerKorps at his home on January 5th featuring the Battle of Sebastopol 1942.  Sebastopol had been under siege for a while and the Germans and Romanians were about to launch their final offensive to take the city.  Victory conditions for the scenario were such that even though the Russians were likely to loose the battle they might still be able to have a game victory if they were able to hold enough of the city by games end.   I commanded the Russians with the aid of Alan S.   Several other players who were to be on the Russian side were unable to make it due to family illness.   Scott W commanded the Germans aided by Richard and a friend commanding the Romanians and Peter commanding the German amphibious attack.   Alan and I were able to delay the Axis juggernaut for a while thanks to our artillery driving back the Axis attacks.   The amphibious attack was also held for a while, but the devastating effect of a very large German siege gun rendered several of our battalions ineffective.  The battle started at night just before dawn.  A Romanian tank destroyer battalion was able to break through early in the battle, but was attacked from behind by the Russian infantry battalion that it had passed through causing it to panic.   It then came under flanking fire from our reserve T34 battalion which further disrupted it.   Meanwhile German artillery was pounding my positions on the northern edge.  Finally the German panzer force started to arrive from the North.   At this point our western bunkers were still holding, but the amphibious assault had started to wear down the coastal defenders and the northern hill was now being contested.   When the game ended it was a marginal victory for the Axis forces.  Following are pictures of the battlefield and some of the action during the game. 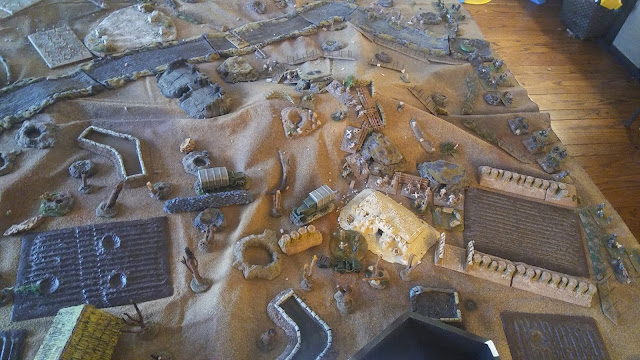 North edge of the battlefield.  German infantry at right edge ready to attack 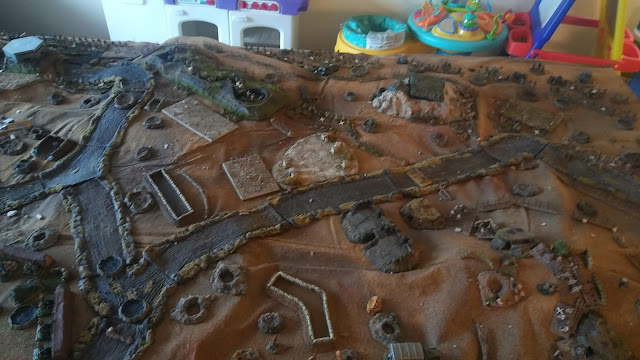 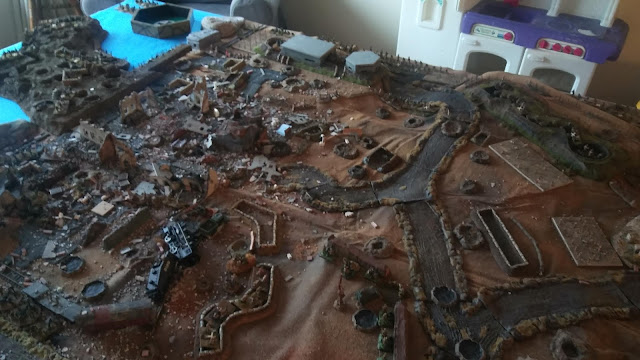 south central area.  bunkers on the top edge of the table.  what is left of Sebastopol on left half of picture 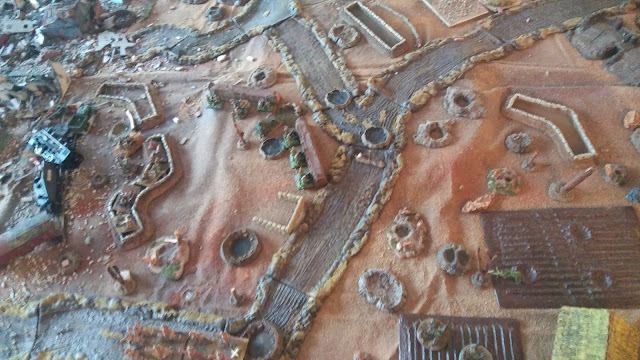 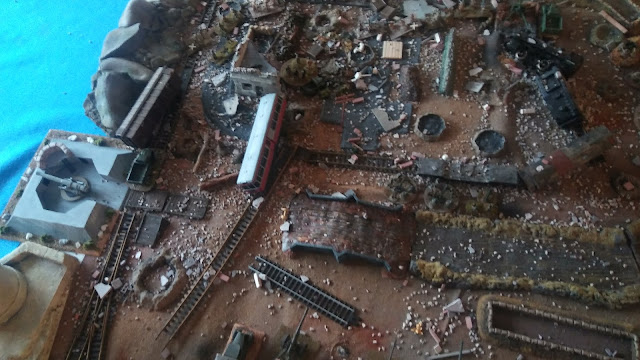 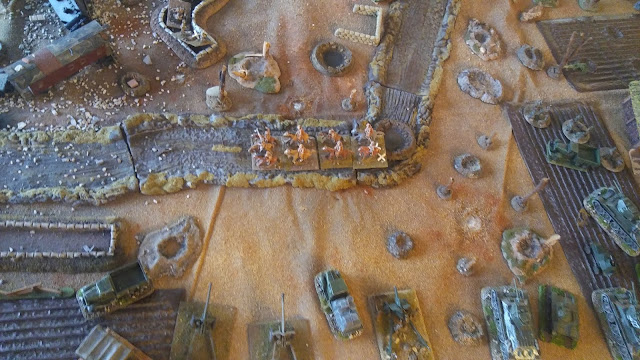 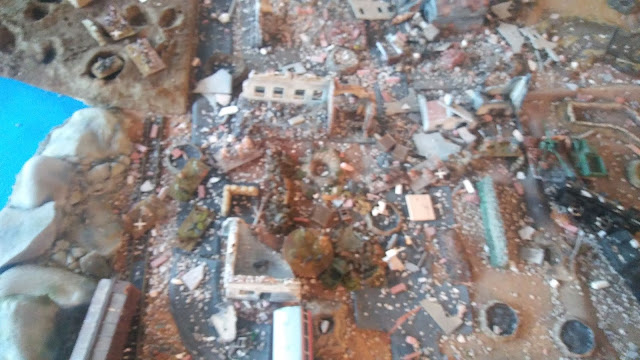 another view of Sebastopol. 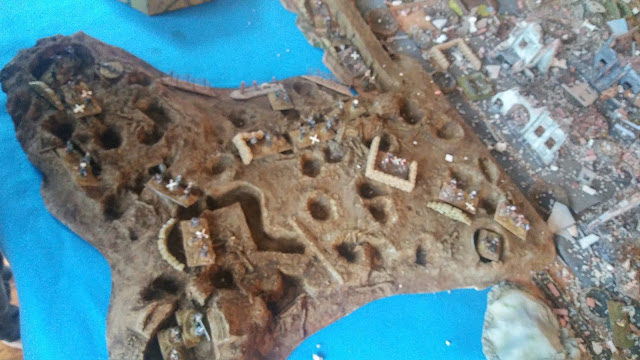 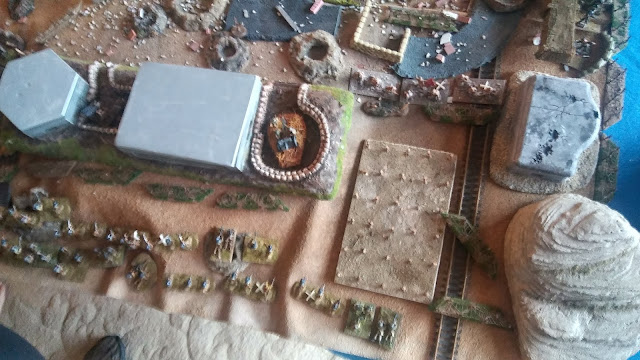 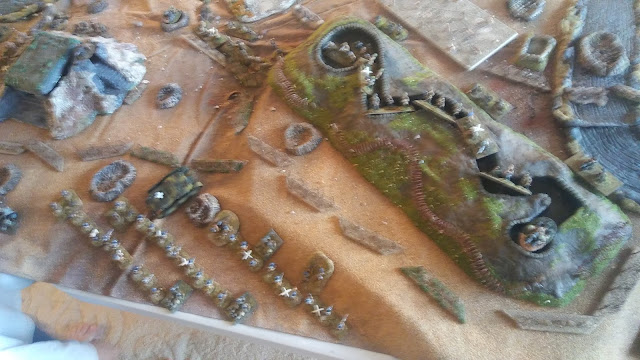 Northwest bunkers and entrenchments with more Romanians just below. 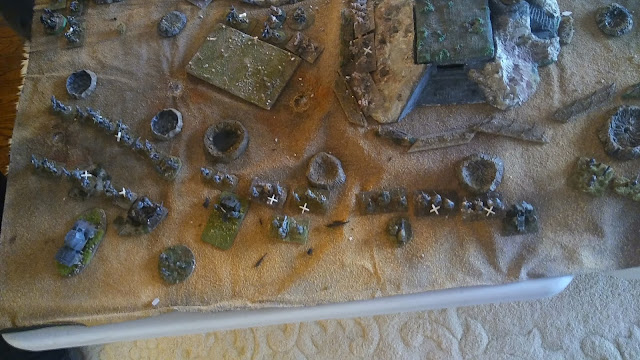 Germans about to attack the northwest bunker 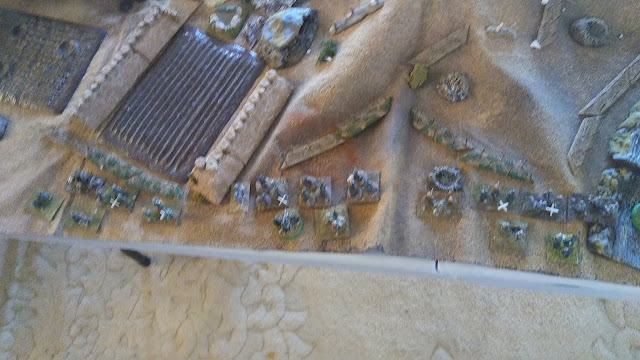 Germans preparing to attack from the north 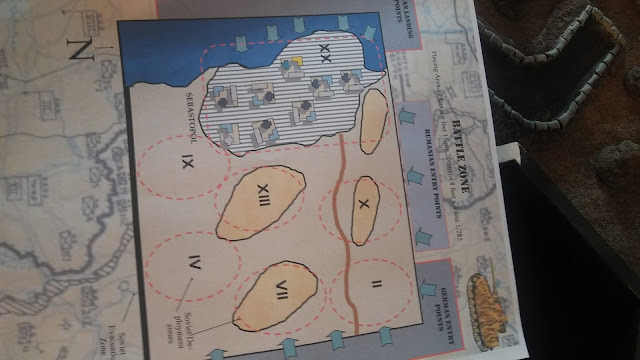 map of the battlefield showing hills and the city of Sebastopol on south edge of map. 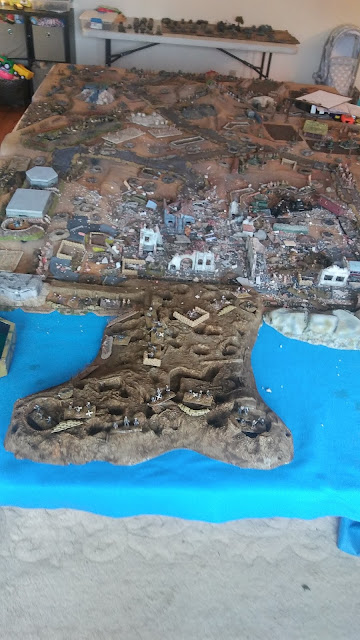 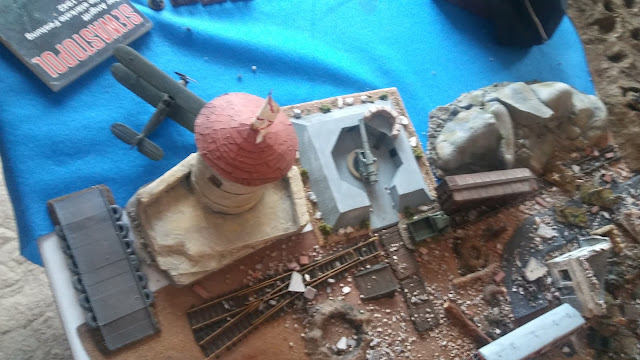 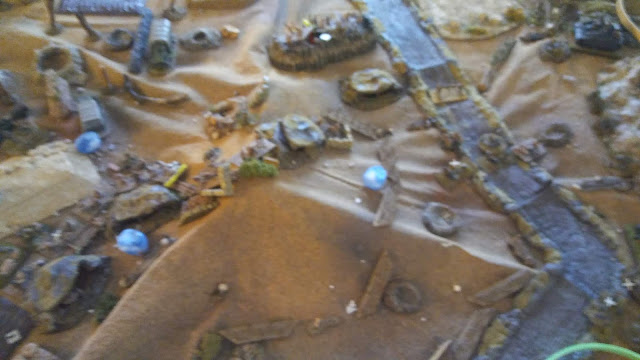 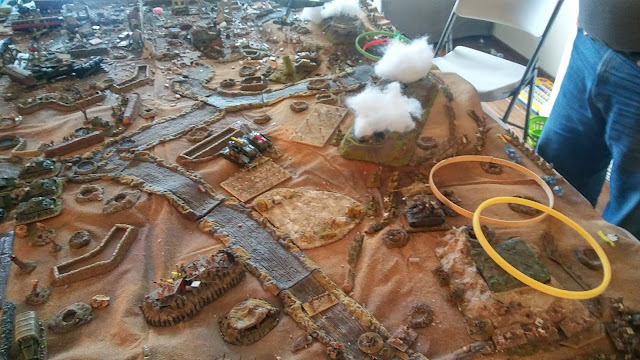 Russian artillery breaking up Romanian attack and also causing some collateral damage to a bunker.  Romanian tank destroyer battalion that broke through is near the center of the picture after being attacked from rear by Russian infantry.   The T34 battalion is at the left and will maneuver to flank the Romanian vehicles.. 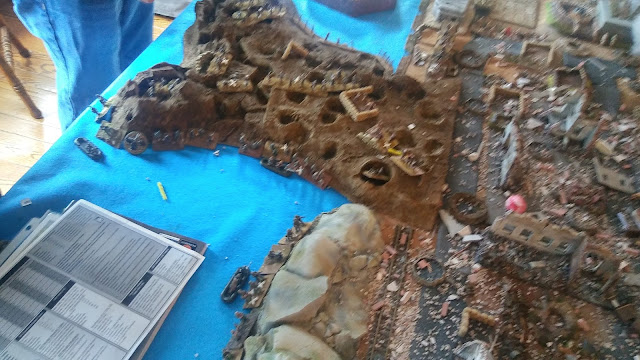 German amphibious forces have landed and have come under fire from the defenders.  The pink puff ball marks the impact point of huge German siege artillery  Three of our battalions would be disrupted for a while due to the impact.   If it had deviated further south it would have also affected the Germans on the coast. 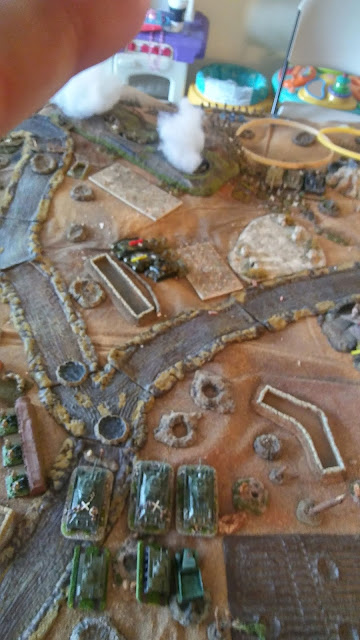 The Romanians had dropped smoke on the bunkers to keep them from firing at them.   T34 battalion at bottom.  Disrupted and panicked Romanian tank destroyer battalion in center.  T34s would move to their right to flank them.   The hill in the middle blocked line of sight and fire. 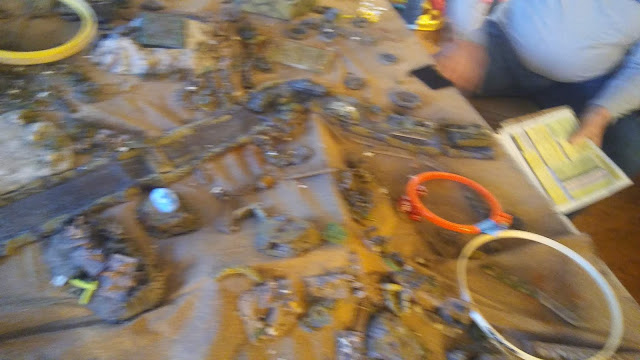 German panzers arrive from north
Posted by William Butler at 9:56 AM

Looks like it must have been an intense fight, Bill.