The two designs for the guided missile cruiser are CG300 and CG330.  The maximum size of a fusion power plant in the rules is 300MW.  However, the battleship in the game that is being used for the Panthari Imperium has a 415MW power plant.  Therefore I created a 330MW power plant  to provide full power for the 300MW drive (the largest in the game), sensors, and laser weapons.

While investigating the various 2300AD websites I was able to find an excel spreadsheet for designing ships.  After putting all the components into the spreadsheet, it provides all the game statistics for the ship.  Using the design spreadsheet also allows you to verify that the ship has the correct volume for the design.

The two cruiser variations have a pair of 24 meter external diameter, 21 meter internal diameter counter-rotating hamster cages/spun outer hulls that are 12 meters wide.  There is no artificial gravity in the game so various types of spun habitats are needed for crew health and comfort.   In combat the spun habitats are stopped and locked in place.   Some ship designs in the rules including the DDG150 have habitats that are on pylons that are rotated around the main hull as can be seen in the view of the DDG150 below. 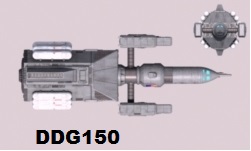 The forward 12 meters of the CG's house eighteen missile bays, the bridge, the tactical operation center, life support, medical bay, and sensor equipment.   The rear of the hull houses the other eighteen missile bays and drive along with part of the fusion plant.   Due to upgrading the missiles, each missile bay occupies 100 cubic meters instead of the original 70 cubic meters in the rules.  The fusion plant is rather large and occupies over 50% of the internal hull space extending from the rear of the ship to just past the rotating habitats.  This also includes the various engineering work stations for the power plant.  The image below shows the two versions of the guided missile cruiser. 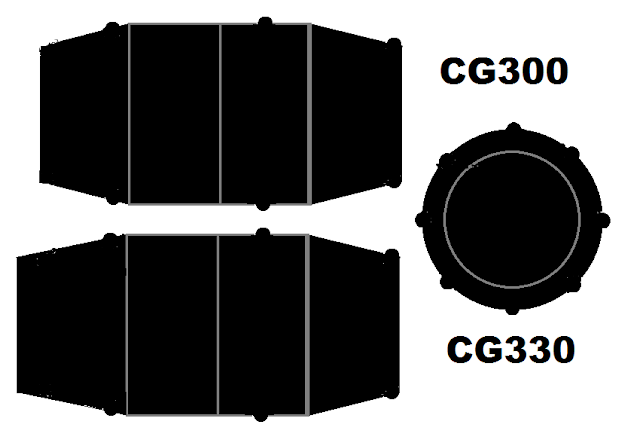 The bow is to the right.  The larger power plant of the CG330 requires an extra three meters of length added to the rear of the ship compared to the CG300.   There are 24 laser turrets arranged in six rings of four along the length of the hull with alternating rings offset by forty-five degrees.  Statistics for the ships are as follows:

The cruisers also carry four sensor drones compared to the two for the destroyer.   While their cost is about three times that of the destroyer, their missile salvo is nine times more powerful.  The armor of the CG330 can be penetrated, but with difficulty.  It costs almost as much as a Panthari battleship, but can out run it and has much better armor.   The CG300 costs about the same as a Domain battle cruiser, has half the armor, but is faster and can launch nine times as many missiles.  The CG330 is more expensive, but is better armored than the Domain BC.

Posted by William Butler at 3:02 PM