Several regiments of the army of Clove-Hamhock form for review. The new recruits have completed their training and are almost ready for the upcoming spring campaign season. Battalion guns will be issued shortly along with regimental colors. The figures are from Heroics and Ros/Navwar 7 Years War and Marlborough ranges. They are based for Volley and Bayonet.
Posted by William Butler at 6:05 PM 9 comments:

The History of the Guano Wars

During the Napoleonic Wars the French took over Spain. This eventually led to most of Spain's Latin American possessions gaining independence. Two of the new countries that were formed were La Cucaracha and Buena Vista. Neither country had much in the way of natural resources until the discovery of rich deposits of guano in a region on the border of both countries. Since the components of guano could be used to manufacture gunpowder, both sides claimed the region for themselves. This has led to a series of wars for control of the region that has lasted to the present day. Later geologists have also found a vast reserve of oil underneath the guano fields, which has only aggravated the situation. At various times the United States and other European countries have supported one side or the other in order to gain access to the resources of the region. Just after the end of the Second World War, agents from Buena Vista posing as scrap metal dealers purchased a large amount of German war material. La Cucaracha responded by contacting the Soviet Union and received a number of Russian armored vehicles and weapons. During the cold war period and the present the Peoples Republic of La Cucaracha received significant support from the Soviet Union including many of its latest tanks and armored fighting vehicles. To counter this the Democratic Confederation of Buena Vista was given aid by many of the western countries. Buena Vista's army now has units equipped with a mix of German, French, British, and American equipment. La Cucaracha's army is in not much better logistical condition as the country has all kinds of Soviet equipment from obsolete T54/5 tanks up to modern T90's. Almost all the fighting has taken place in areas other than the guano fields as neither country wanted to damage their major source of income. The fighting has never resulted in any lasting advantage for either side. If one country suffered a setback, it would soon receive additional arms and aid and be able to redress the balance.
Posted by William Butler at 7:00 AM No comments:

Iranistan field army with some light infantry auxiliaries, but no light horse or elephants on maneuver and deployed for battle. Figures are all Heroics and Ros. Byzantine cavalry and Late Roman infantry. The guard cavalry are in the first rank of the cavalry column and form the reserve when deployed for battle. they ride partly armored horses. All cavalry are equipped with lance and bow. Heavy infantry are equipped with throwing spears and bows. Light infantry are archers.
Posted by William Butler at 12:58 PM 2 comments: 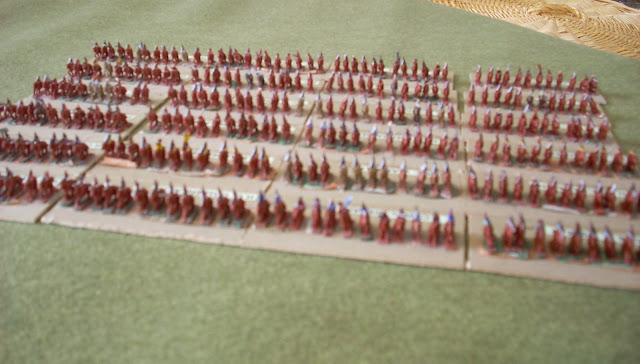 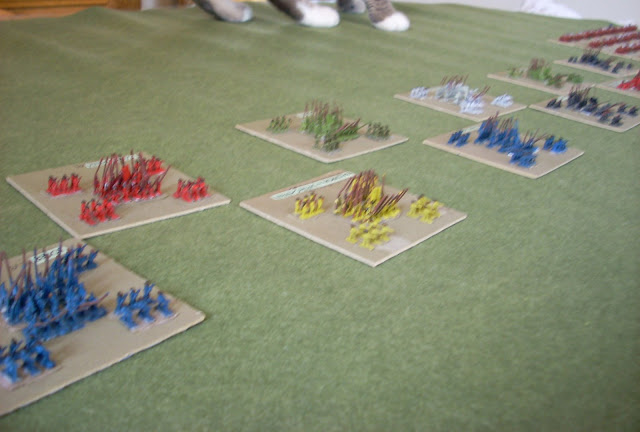 Well i finally got a digital camera and took some pictures of my 30 years war armies. The one on the left is some of the imperial tercios while that on the right is some of the heavy cavalry. Each of the tericos has 48 figures, half of which are pike and the other half shot. The white paws in the back belong to our cat Misty.
Posted by William Butler at 2:40 PM No comments:

Well i finally purchased a digital camera and i am learning how to use it. i would have uploaded more images of my troops, but the others were too blurred to use. As it is the cataphracts are rather blurred. Pictures of the Iranistan army will be posted later when i take better pictures of the troops. The two pictures above are from my Seleucid army. The top is some of the cataphracts and the bottom is most of the phalanx. There are just over 1000 pikemen in the picture. One of the formations is partly cut off on the left side of the picture. They are arrayed in a formation 8 figures deep by 160 wide. Almost all of the figures are by Heroics and Ros with one unit of Irregular Miniatures. Some Baccus and Rapier Miniatures phalangites are in the process of being painted. The front half of the formation is based for warmaster ancients and are the most recent addition to my pike armies, while the back half is mounted on double wide by double depth dbx bases for ease of maneuver. The pictures were taken on one of Hotz' felt game mats. One side is printed with hexes while the other side is blank. They come in a variety of colors, sizes, and grid patterns. More information about them can be found at: http://www.hotzartworks.com/ Hotz is one-half of the Larry Leadhead team. He also makes a line of 1:300 ancient galleys and buildings.

Other ancient armies that i have are:
Early Imperial Roman
Republican Roman
Late Imperial Roman/Early Byzantine (these will be used for the Iranistan army along with some elephants)
Hoplite Greek
Various Pike armies
Classical Indian
Sassanid Persian
New Kingdom Egyptian
Generic Mounted Barbarians (Sarmatians, Huns, etc.)
Generic Foot Barbarian (Gauls, Britons, etc.)
Along with some 6mm fantasy from Irregular - orcs, dwarfs, and others.

For Iranistan i will be using the Vis Magica army list http://vismagica.com/ArmyLists/Conan/al_conan_iranistan.htm
which is very close to what i had envisioned for Iranistan.
Posted by William Butler at 1:54 PM 1 comment: