The country's president for life, Elvis Narcisso, likes to indulge in purchasing tanks and vehicles from different countries.   Currently there are four brigades in the Buena Vista army.   One brigade has American equipment, one has British equipment, one has French equipment, and one has German equipment.   Attempts are being made to purchase equipment from Israel to equip a fifth brigade.

The Buena Vista army is an all regular force and is well trained and equipped.   Low level initiative is encouraged.    The overall size of the army is smaller than that of La Cucaracha.  Older equipment has been moth-balled.  Troops who retire from the army are part of an inactive reserve that could be called into service to use the older equipment should the regular army be decimated.

Buena Vista and La Cucaracha have had a long lasting dispute over a region on their border that has large reserves of oil.   Both countries have used their income from oil sales to equip their armies.
Posted by William Butler at 9:09 AM No comments:

Theoretically the La Cucaracha army is organized into two divisions, each consisting of an armored brigade, a mechanized brigade, two motorized brigades, and  an artillery brigade.  The divisions are administrative formations.  The First Division has the 1st Motorized, 3rd Tank, 4th Guards Mechanized, 6th Motorized, and 10th Artillery brigades.  The Second has the 2nd Guards Tank, 5th Motorized, 7th Mechanized, 8th Artillery, and 9th Motorized brigades.  Except for the 2nd and 4th Guards the army is composed of conscripts and tends to lack initiative at lower levels, though overall training is good.

The tank battalions have three ten tank companies and a headquarters element..   In game terms this would be six platoon sized elements plus a headquarters element.   The exception to this is the 4th Guards Mechanized Brigade which has thirteen tank companies which would be nine platoon elements in game terms.  There are plans to increase the strength of the other tank battalions to match those of the Guard.  The infantry battalions have three infantry companies, each of three platoons,  an anti-tank platoon with man portable ATGMs, an 82mm mortar platoon, and a headquarters element.   A mechanized battalion would have BMPs and a motorized battalion would have BTRs.   The mortar platoons use MTLBs.

In reality the army is not as well organized as listed above.   Brigades vary in strength from two to six combat battalions.  The composition of the brigades, plus the brigade assets and artillery battalion, is as follows:

La Cucaracha does have some older equipment in storage.   These are mostly obsolete tanks and AP:Cs which could form three additional understrength tank brigades.
Posted by William Butler at 8:43 AM 1 comment:

Following the game on Saturday at the South Bay Game Club I decided to run the same battle the following day at the Sacramento club meeting saving time unloading and reloading everything in the car.

I did take the foam mats out as I had time to finish flocking them after getting home Saturday evening.

The two fictional Latin American countries are the Peoples Democratic Republic of La Cucaracha led by El Supremo Jefe Patronus and the Federal Union of Buena Vista ruled by President for Life Elvis Narcisso.   La Cucaracha uses Warsaw Pact and Chinese equipment while Buena Vista uses a variety of Nato and Israeli equipment.
Mike O/Brien commanded the Buena Vista force while Hal Lotman and Keith commanded the La Cucaracha brigade.   The forces were the same as the previous battle with La Cucaracha fielding the 4th Guards mechanized brigade of one tank battalion, two BMP battalions and one  122 artillery battalion.  This was supported by two 152mm artillery battalions and one rocket battalion.

The La Cucarachans were defending.   The Buena Vista forces had to either capture the city of Princepe de La Paz or surround it.   The Buena vista plan was to break through on both flanks and cut off the city.   One tank battalion was off table in reserve and could be diced for starting on turn two.   The game lasted about three or four turns with the Buena Vista forces punching holes through both flanks.  At this point the game was called as a victory for Buena Vista as the defenders had lost about a third to half their force.

The battle used a number of house rules designed to expand the battle field to a size more suited for brigade or larger forces instead of the battalion sized field of the normal ground and time scales of the rules.  These can be found in a previous blog post.  http://18clovehamhock.blogspot.com/2013/03/house-rules-for-cold-war-commander.html 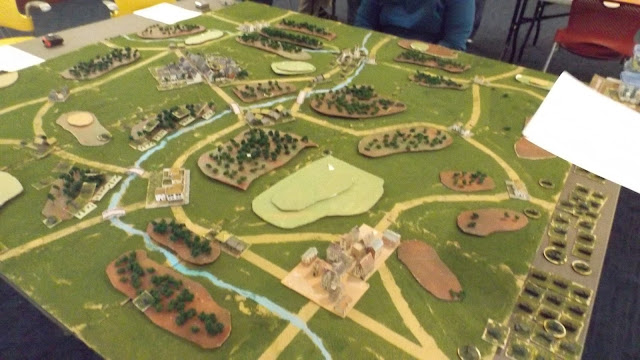 The battle field. Buena Vista forces on edge of table. 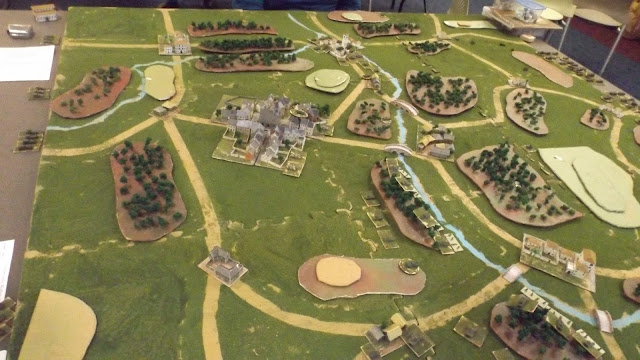 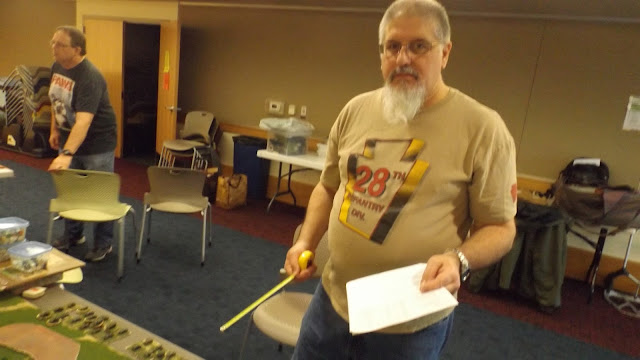 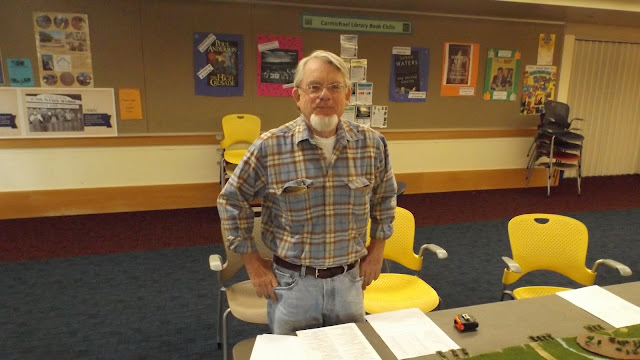 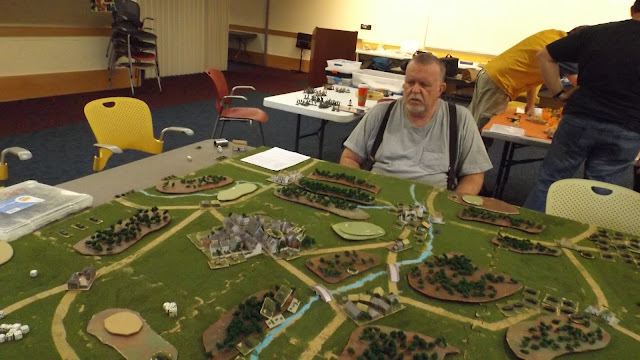 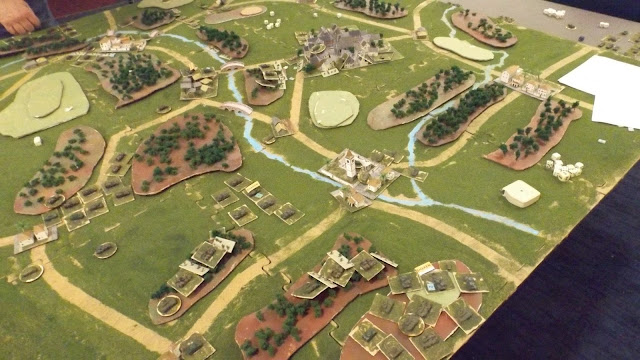 Buena Vista forces advance and break through on their right flank 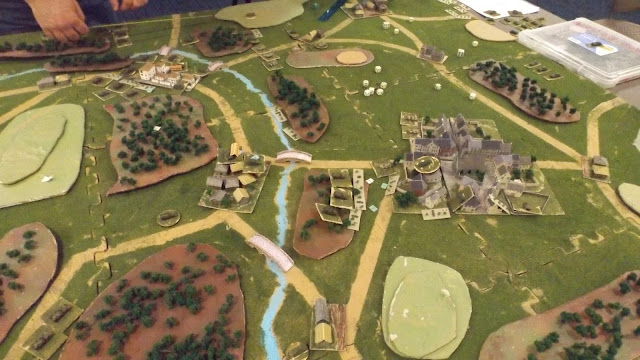 Action near the center of the table.   City of Princepe de La Paz in right center of photo.
﻿
Posted by William Butler at 9:47 PM No comments:

Ran a game of Cold War Commander at the South Bay Game Club this past Saturday.  This was a fictional battle between The Peoples Democratic Republic of La Cucaracha and the Federal Union of Buena Vista.

I was using some of the 2 foot by 2 foot foam mats that I had just received.   These were black and had been painted a light brown and partially covered with green foam.   Roads were centered on each edge of the mats and those mats with water ways added had them off set by about 4 inches.

We got a late start and were not able to finish the game.   As a result the battle was inconclusive.

There were over three dozen people at the club meeting.   Other games were a Viet Nam game, a Northwest Frontier game in memory of Larry Brom, a Napoleonic naval game, a Tactica game, and Cthulu game, and a DBA tournament. 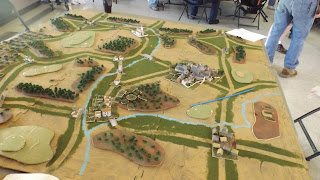 The battlefield.   I only had time to glue foam along the edges of the roads. 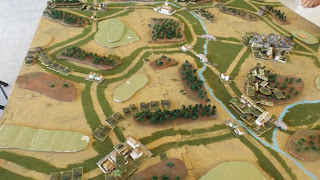 Buena Vista forces (on the left) advance against the positions of the La Cucaracha 4th Guards. 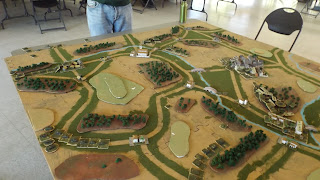 Another view of the battlefield.  The large town in the back is the city of Princepe de La Paz. 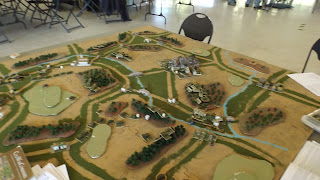 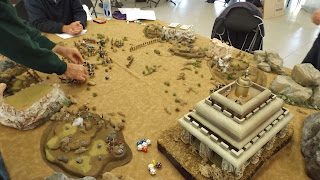 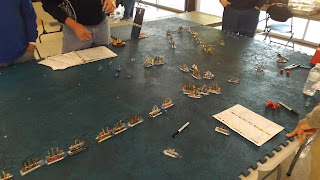 The Napoleonic naval Game
The other games had ended earlier and I was not able to get pictures of them﻿
Posted by William Butler at 6:13 PM No comments: