The Chrisobel system has five planets and an asteroid belt.  Three of the planets are gas giants, one is a rock ball, and the innermost planet, Abbadon, is a terrestrial world.   We had passed the FTL gravitational limit for the Chrisobel system some time ago, had received a radio message that the system was now under the control of The Domain.  As we advanced in system towards Abbadon we had detected two bogeys heading towards us.  We were now approaching engagement range.

"Captain, the bogeys are now within one light minute"
"Bring our squadron up five light seconds above the elliptic and have both ships launch a sensor drone"
"Aye, Sir"

"The bogeys have altered course to our port side and have launched what appear to be two drones."
"Light up the drones and lets see what we have"
"Drones have activated sensors and we have identification, Sir.  The bogeys are two Domain Planet class missile ships and the two smaller objects are sensor drones.  Separation is now less than 45 light seconds"
"Launch missiles'
"Missiles launched.  Approximately 20 minutes to intercept...  Sensors indicate that they have launched missiles also, sir.  There are eight of them headed our way.  They will arrive in 20 minutes"
"Move us to starboard and prepare point defenses"
"The enemy is now at thirty light seconds.  Missiles at engagement range"

As the enemy missiles approached our point defense batteries opened fire taking out two of them, but the other six targeted the Rosen ripping her to shreds.  Our missiles were just as effective leaving one of the Domain ships a shattered hulk.

"Bring us around to port and launch the second drone, activate its sensors and use it as a screen to hide us from their sensors."
The enemy launched another drone also sir and is now at 20 light seconds."
"Launch another flight of missiles and target their drones"
"Missiles launched and will engage drones in ten minutes"  "Drones destroyed.  We have a lock on the enemy."
"Launch another flight of missiles and continue to screen us with the drone."
"Enemy ship has been hit and looks like it has lost its sensors, Sir.  It is heading out system"
"Hold fire.  We may need our remaining missiles.  Lets pick up the drones and survivors from the Rosen."

Below is a picture that Mike took of the game.  The star field is from JoAnn fabrics.   They carry several different fabrics with star patterns.   I found this one and another to be what I wanted and at $20 for enough material to cover a five foot by six foot table the fabric is a lot better price than the space mats that are available.  The picture shows the "flight stands that are used to designate unidentified ships.  ship models were placed on them when identified.   Unfortunately I forgot to take pictures of the game.   Fortunately Mike did take this one at the meeting. 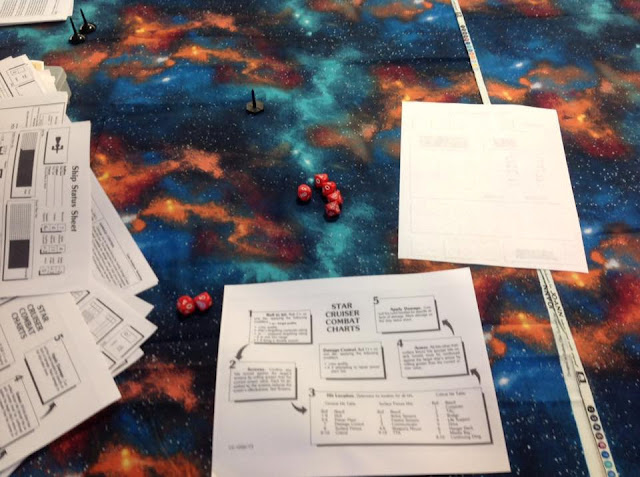 The following diagram shows the relative positions of the two fleets during the game.  The federation is black and the Domain is brown.  It is not to scale.  The battle lasted for 80 minutes of game time before the remaining Domain ship fled. Photo below is from the end of the game 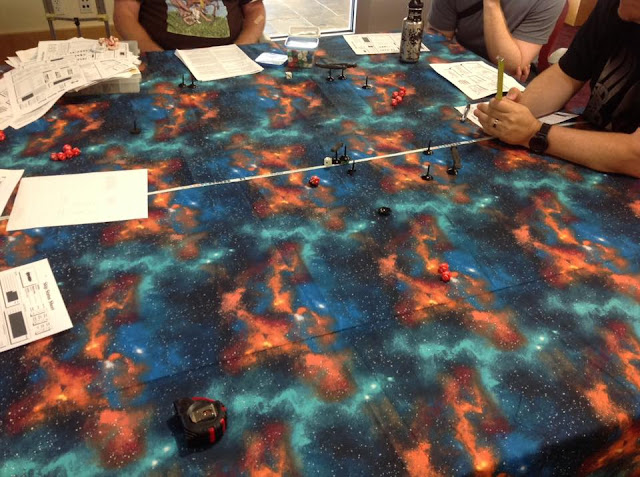