The last games of 2016 were two Starcruiser games at the South Bay Game Club.   Starcruiser was a spaceship combat board game published by Game Designers Workshop as part of their 2300AD universe.   GDW is best known for the Traveler series of role playing games, but they also published a lot of historical rules and board games.  Command Decision was their set of WW2 miniature rules.  The picture on the box is the American cruiser. 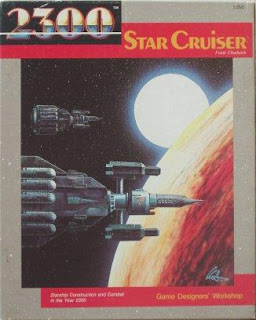 The rules can easily be adapted to a three dimensional miniatures game with a few modifications.   The game uses hexes for movement.   For miniatures the turning rules were changed to one movement point for each 45 degree turn and one movement point to go up or down one level.   Each turn in the game represents 20 minutes.   For the miniatures this was changed to 10 minutes.   Each hex represents two light seconds.  This was changed to one inch equals one light second.

In order to attack another ship it has to be identified using sensors.  See this website for an in depth article on detection http://www.projectrho.com/public_html/rocket/spacewardetect.php  That site also has quite a few other articles on space warfare.  The Starcruiser rules do state that you know something is out there, which is why markers are used to note the presence of any ships, drones, etc., and that you need to use sensors to identify a target.  The main ship killers in the rules are guided missiles.   Some years later when I started reading the Honor Harrington series by David Weber, I noticed that his ship combats were similar to the Starcruiser rules.  The main difference was the type of propulsion used.   The board game uses a macro-quantum tunneling effect for a starship drive that is named for the scientist who invented it.   The ship is instantly shifted from its current location to the next without moving through the intervening space.   The distance moved is small and linear per shift and is affected by gravity.   Ships have to be far enough away from a sun or planet for their gravity to no longer reduce their movement rate to less than light speed.  Outside of the system gravity ships are able to move at many times the speed of light.   Within it their velocity drops to about 1% of the speed of light.  Similar to the hyper limit in David Weber's books.

So why missiles as the main ship killers instead of lasers, railguns, or other weapons?   After all lasers are highly accurate weapons and are not really affected by range.  During one ten minute turn they could hit a target at 600 inches!  The problem is the speed of light and once fired lasers can not change their direction.   At a range of three light seconds the firing ship would be detecting the location of a target where it was three seconds previously and have to calculate where it will be three seconds after the time the laser was fired.   In six seconds a ship with a movement rate of 5 (a general average of ships included in the game) would travel 5000km.   This would be 50,000 times the length of a 100 meter ship.   If the target ship does not change course or velocity than its location at the time the laser beam would arrive would be easily determined, but any alteration in velocity or direction would reduce the chance of hitting the target greatly.  A 1% change in direction would reduce the chance of hitting by 1,000.  Railguns are even slower than lasers.   Once fired the kinetic energy round would continue on with little loss of momentum.   Firing at a ship with an inhabited planet behind it and missing would result in major damage to the planet.  However, if a railgun projectile were to hit a ship the shock wave from the projectile passing through the ship would destroy it.  Lasers are good for point defense against fighters and missiles.   Guided missiles can alter their course as needed to reach their target with little chance of collateral damage.  To simplify missile movement, they do not deduct from their movement when altering course, though the deduction from movement from altering course could be applied.

One of the good things about the game is the ship design manual that is included.  this covers all aspects of designing a ship.   One additional item that is needed is the article on designing missiles from Challenge Magazine 36.  The article on missiles is necessary as their drives and power plants have less mass and volume than those used for normal ships.   The article also has the volume and mass for the missile warheads, hulls, sensors, and control unit.   Other items that are useful, but not needed are the Ships of the French Arm book and the Invasion book.  All these can be found at Wargames Vault.

The first game we played had two Federation cruisers defending a system against an invading force.  The defenders did not know who the invaders were, expecting Panthari Imperium ships to be the enemy.   They were actually four Blue Meenee battleships.   One battleship had almost six times the tonnage as a Federation cruiser.   They also have larger ships with about ten times the tonnage of a Federation cruiser.  For background information about the setting see this blog post http://18clovehamhock.blogspot.com/2013/03/future-war-commander-forces.html  Other posts can be found by clicking on the label for this post.

The Federation launched one sensor drone from each ship.  These moved out ahead of the cruisers and one activated its active sensor array.   Upon identifying the opposing ships a salvo of four missiles were launched from each ship.   The board game allows multiple ships to be stacked in one hex.   Physical miniatures cannot be stacked, but both players were allowed to and did state that their ships were in formation grouped in one spot.   The aliens responded by launching their fighters and a pair of missiles from each ship.   The federation missiles were all targeted on one ship.   All the alien ships used their lasers to try and take out as many missiles as they could.   Only three were destroyed and the rest of the missiles proceeded to knock down the shields and shred the battleship.  The target ship had four times the level of armor protection than the Federation cruisers, but still suffered significant damage.

The second salvo of missiles destroyed the next target.   At this point the aliens broke off and fled.   Their ships, fighters, and missiles were not as fast as the Federation cruisers.   With their velocity of nine the cruisers could easily keep away from the alien ships, fighters, and missiles.  The maximum velocity any of them could manage was six.

The second game matched a Panthari Imperium battleship against the two Federation cruisers.   Again the cruisers were able to outrun the Imperium missiles, ship, and fighters while pounding the battleship with a missile salvo.

The two games pointed out a major problem with the missiles in the game.   None of them moved faster than six.   The ships used for the Federation cruisers were the American cruisers from the game and with their fast speed they were virtually untouchable.   The alien ships were the alien ships from the game and the Panthari Imperium battleship was the French battleship.

What needs to be done with the missiles is to redesign them.   With more powerful and efficient drives and power plants  their velocity can be increased to fifteen.  This will make the missiles cost about double their original cost, but keep the same dimensions.  A velocity of fifteen is close to the maximum that can be obtained without creating a much larger and more costly missile.   The design manual uses a cube root formula for calculating drive efficiency which determines the velocity of ships and missiles.  In order to move the same mass at twice the velocity it takes eight times as much power from power plant and drive.  Two cubed is 2x2x2 = 8.  There are three different levels of drive efficiency and also three different levels of power plants.  The better quality drives and plants usually require less volume and have less mass, but cost a lot more. 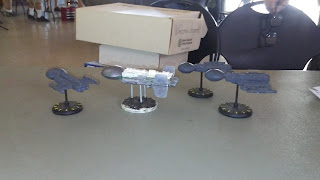 Blue Menee fleet.  These are Robert Preston's ships.   He has four different fleets, each with its own color and theme. ﻿ 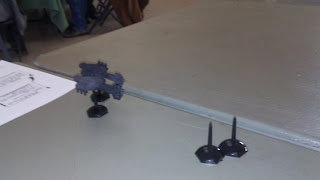 The Federation Cruisers with two stands representing the sensor drones that they launched.   Ships are by Brigade and are from my collection.

Posted by William Butler at 7:06 AM

Nice post, Bill. Interesting to read your description of the game and the build system.