OPFOR The Battle of Carmichael

I ran a game of OPFOR at the Sacramento Miniature Wargaming Society meeting on Sunday.  OPFOR is the modern addendum to PanzerKorps.  The forces involved were the 1st Brigade of the La Cucaracha army and the German Brigade of the Buena Vista army.  This was a playtest of the scenario that I would be running at Pacificon on the first weekend of September. 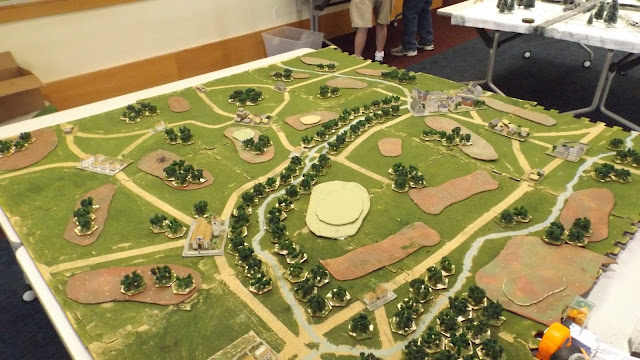 ﻿
Ground Scale was 1cm = 100 meters.  The six foot by six foot table gave a battlefield of 18km by 18km.   Except for the movement distances everything else was at the 1cm = 100 meters scale.   Movement rates were kept as per the rules.  The scenario was a meeting engagement with both sides entering from their table edge.  Aaron and Gary commanded the La Cucaracha army and Chris commanded the Buena Vista army. 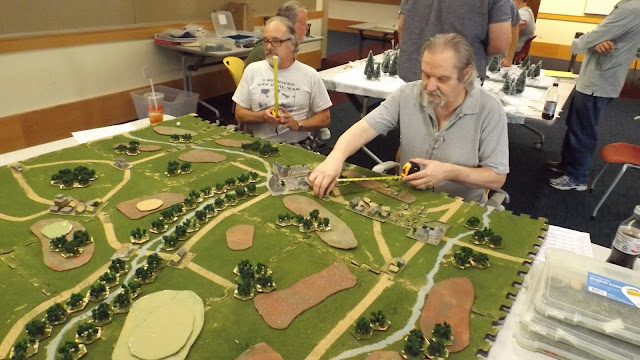 Aaron on the left, Gary on the right 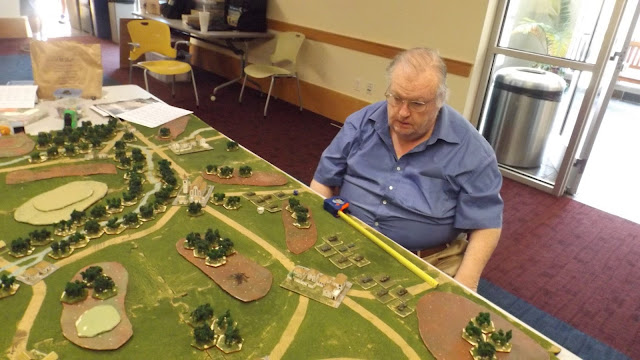 Chris
﻿
Chris chose to enter all three of his brigades in deployed formations on the left half of his table edge, while Gary and Aaron split the six La Cucaracha battalions between them for each half of their table edge.   Gary entered his battalions in a deployed state while Aaron came on in road column.  The battle started at 6AM with the first day segment having three turns.   The next three day segments had one turn and the last one had two. 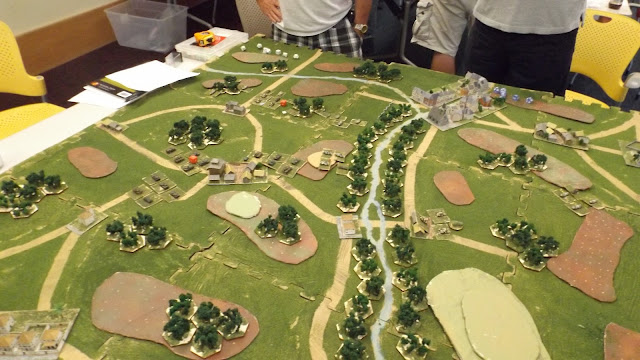 ﻿
Chris advanced and engaged Aaron's battalions, while Gary moved his battalions forward as quickly as he could to engage Chris from the flank.   Chris had initially advanced with the Puma battalion in the center of his formation.   After he started engaging Aaron's command he shifted the Leopard battalion on the right all the way over to his left.  Aaron had pulled his two BTR battalions back into a couple of woods where he dismounted the infantry.  His tank battalion was in the center of his command. 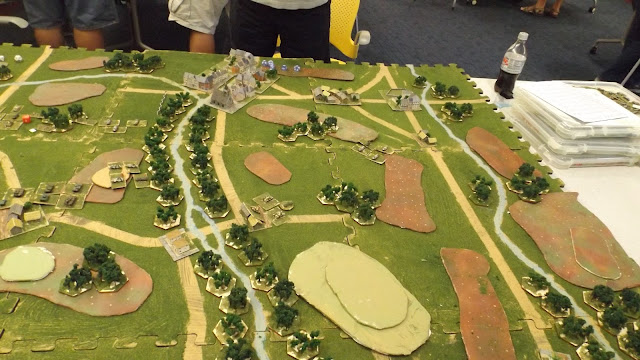 ﻿
Chris's artillery was fairly accurate and hit one of the BTR battalions and the tank battalion.   The La Cucaracha artillery targeted the Leopard battalion that had started on Chris's left flank.   Aaron later attempted to retarget the artillery on the Puma battalion, but it went long and fell on the far side of the town.   We used a scatter die from Games workshop to determine deviation direction.   This is a die with arrows on all faces (there is a hit marker on one of the faces with a small arrow).  The next attempt to hit the Puma battalion fell short. 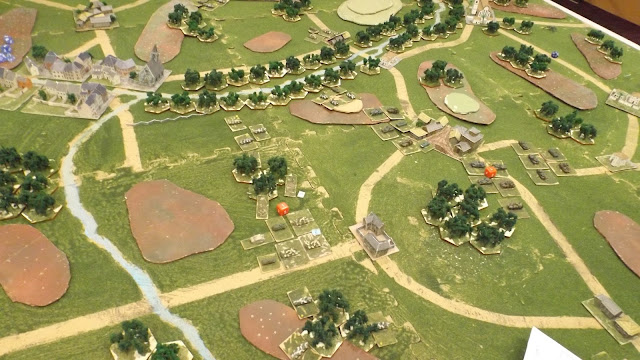 ﻿
Gary's battalions finally arrived on the right flank of Chris's Puma Battalion, but they had arrived too late as Aaron's BTR battalions panicked taking the tank battalion with them.  At this point Gary and Aaron conceded the game to Chris.   Both Aaron and Gary tended to have poor die rolls throughout the game, while Chris tended to have better than average die rolls.

﻿
After assessing the game the La Cucarach forces will upgrade with brigades that have BTR's.   The BTR's were armed with a heavy machine gun and had to dismount the infantry in order to be able to engage their opponents with any hope of damaging them.  I will be replacing them with the improved version that has the 30mm Auto-cannon and also mounts an ATGM from GHQ, but they will not arrive before the convention.  The game started at 11 and finished by 1:30
Posted by William Butler at 6:34 AM