This past month Wiley Games released their latest addition to their rule sets called "Starfighters".  Play follows the usual procedure of the Fistful of Lead series of games.  Several examples of play can be found on YouTube by searching for Fistful of Lead: Galactic Heroes or other rule titles that Wiley Games has published.

They are fairly simple rules to play, but are a lot of fun.  Don't expect a hard science type of game like Starcruiser.  Some players are thinking of adapting them to airplane combat.   In addition to the light, medium, and heavy fighters there is a section for including larger ships as part of the fighter combat game.

One thing I had not expected was a section in the later part of the rules for fleet actions using frigates on up through battleships.  Fighters still play a part in a fleet battle, but they operate as a flight of six fighters and only engage in close quarters combat against the larger ships and other fighters.

One of the members of the Wiley Games Facebook group recently posted a report on a fleet action game he played and it looked like a good alternative to Starcruiser.  As such, I am adapting the ship specifications for the Pantharii Imperium, Domain, Federation, and others to Starfighter specifications.  this has been done by dividing the number of weapon batteries, missiles, and damage repair teams by six and shields and armor levels by three. While the design methods are entirely different I was able to convert all the ships directly to different specifications except for the Federation BCG300 class battle cruisers.  These would have required at least 30 spaces just for the missile load they carry and resulted in a ship with 40 spaces which is way beyond the levels of the game. 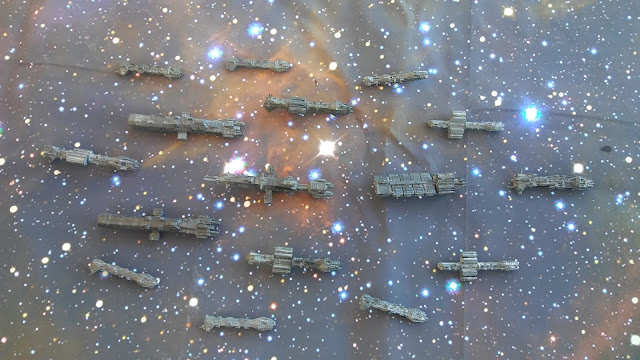 Ships of the Domain.  Top and bottom rows are three frigates, Second and fourth rows have a battle cruiser on the left followed by two cruisers.  The middle row is led by a cruiser on the left, the battleship which also serves as the fleet command ship, a fighter carrier, and another frigate at the right end.  The carrier has eight flights of fighters and the battleship carries another two flights.  The entire fleet totals 166 spaces.  Currently the Pantharii Imperium fleet totals 106 spaces and will be adding a fighter carrier for another 16 spaces.  Three additional cruisers and two more frigates will match their total to the Domain's.  this will give them two battleships, seven cruisers, six frigates, and a carrier. Both fleets will have sixteen ships and ten fighter flights.. 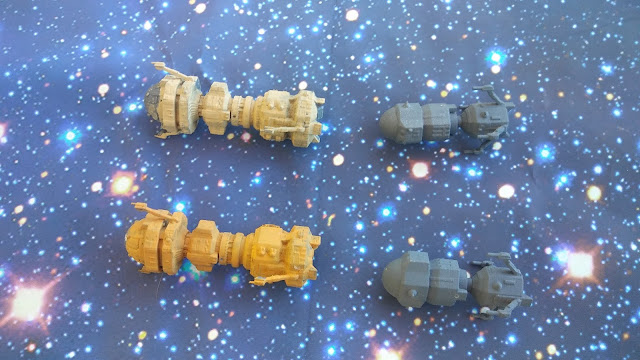 The alien marauders.  Two class A ships on the left and two class B ships.  They total 52 spaces.  I need to find some ships that can fill in for the class D and Class E ships.

I plan on running a solo game or two pitting the Federation against the Domain to see how the game plays.  The BCG300's will either be ships with 15 spaces and six missiles or ships with 20 spaces and eleven missiles.   A few modifications to the rules to bring them slightly closer to how things are in Starcruiser will also be tested.  These are doubling the missile  movement to 24 inches, increasing the firing arc for turrets to 180 degrees except through the rear of the ship, allowing two single shot laser batteries per ship to double as point defense systems and function like the defense drones against missiles and fighters, and reducing standard ship movement to six which is the normal movement rate for most ships in Starcruiser.  Slow ships in Starcruiser move at a velocity of three.  Hopefully these modifications will not upset the game balance.

Hi, those are some interesting ships, I have not seen them before who makes them?

Hi Mac. If you are referring to the ones in the second picture, they are Kafer (aka Kaefer in some spellings) from the 2300AD game. I found them on Shapeways. Unfortunately the person who offered them is no longer on shapeways. However, another vendor on shapeways, Armadillo Miniatures, still offers the Beta which is the smaller of the two and may be willing to make the larger Alpha https://www.shapeways.com/product/BT6LEJH2C/2300ad-kaefer-beta-class?optionId=62392698&li=marketplace
The top picture has the various Earth Alliance ships from Babylon 5. A lot of different vendors on shapeways offer them in a multitude of scales including a multi part model of the Omega that is about three feet long. A couple of them offer Omegas with rotating center sections.

Hi William, thanks for the info, I first thought it might be somewhere like Shapeways but wasn't sure.

I do like the Babylon 5 ships I would be able to use them in Stars & Lasers, not sure about a 3 foot long one though!!! ;O)

The 2300AD ones are very interesting I might have to have a search for those as they are strange but in a good way and I like them.

William: Love your B5 Earth Force ships! Been looking for 2300AD ships. Nice to see that Armadillo has the 2300AD Suffren Class as well. Laurent Esmiol has some wonderful 2300/2320AD 3D designs (http://www.users.globalnet.co.uk/~dheb/2300/Admin/Index5.htm) that would make good models. Unfortunately, Mongoose Publishing is only interested in bringing back the RPG.

Mac: You can find regular and fleet (smaller) scale at the Agents of Gaming site: https://agents-of-gaming.myshopify.com/. They are under the Babylon 5 Wars and A Call to Arms collections. The smaller ships are at https://agents-of-gaming.myshopify.com/collections/fleet-action. They sold the original Babylon 5 Wars miniatures until WB pulled the license. Then Mongoose Publishing got it until they discontinued production due to lack of sales. Agents of Gaming has been selling old stock and, now that they have access to old and new molds, are keeping the figures in stock. If you want to put the work in, you can make the Omega Destroyers spin section spin with adequate drilling and using a central post to keep the front and back sections together.