I finished basing the Sassanid and Byzantine cavalry that I painted this month.  The figures are all from the Baccus 6mm Sassanid Persian line.  Currently no one makes all the figures needed for Early and Maurikian Byzantine armies.  However, by adding shields and paint, I was able to convert the Sassanid cavalry to close approximations of the Byzantine counterparts.

I was able to locate a set of 3mm and 1.5mm paper hole punches.   2mm would have been a better size for the Byzantine shields and with the 1.5mm punch being too small I used the 3mm punch.  I had hoped to use Paintshop Pro to reduce the late Roman shield patterns from the Notitia Dignitatum, but they were too detailed and did not print correctly.  I ended up just printing red on cardstock and punching out the shields that I glued to the figures. 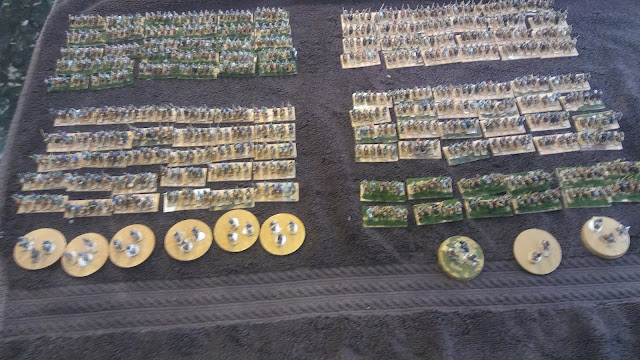 I was painting these figures throughout the month while taking breaks to paint the Achaemenids and NKE's.
The Achaemenid cavalry that I finished earlier this month are here
and the New Kingdom Egyptian army is here

The total figures painted for this month are 923 mounted, 677 foot and chariot crewmen, 30 chariots, and 60 chariot horses.