Made it to Pacificon on Saturday.  There did not appear to be as many miniature or board games as last. year.   Nor did there seem to be as many people participating either.   There were quite a few Command and Colors games at the convention this year covering ancients, Napoleonics, ACW, and WW2

My first game may have been too early in the day as  no one signed up to play.  Fortunately the same set up was being used for the second game which had a full complement of players.  There were several other early games that had one or maybe two players where the gamemaster had to step in and play.

Below are some pictures of other games at the convention.   I was not able to get pictures of all of them. 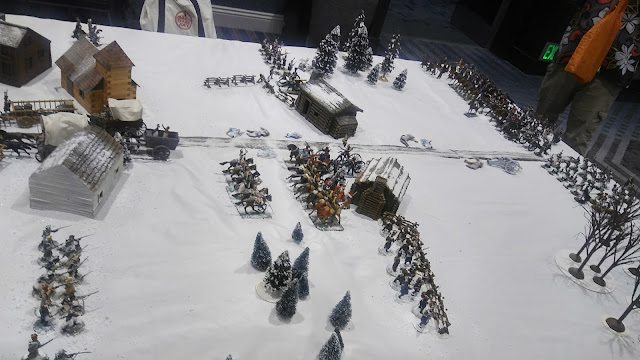 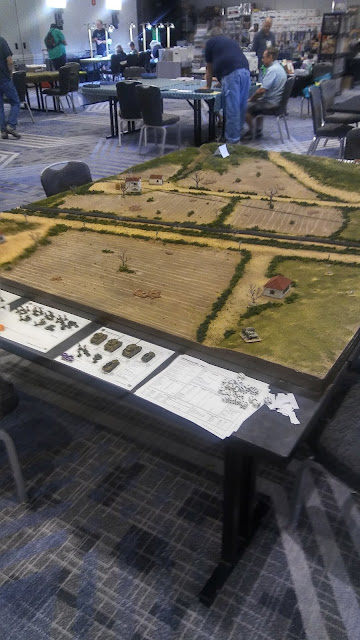 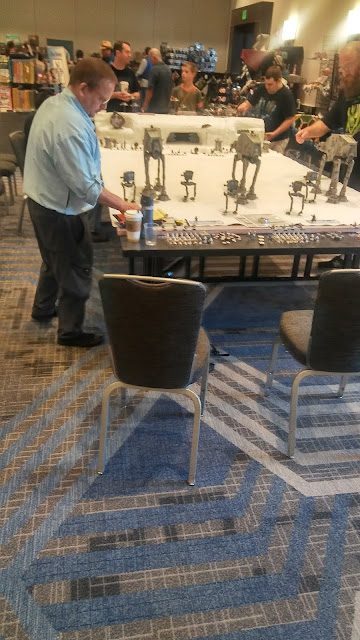 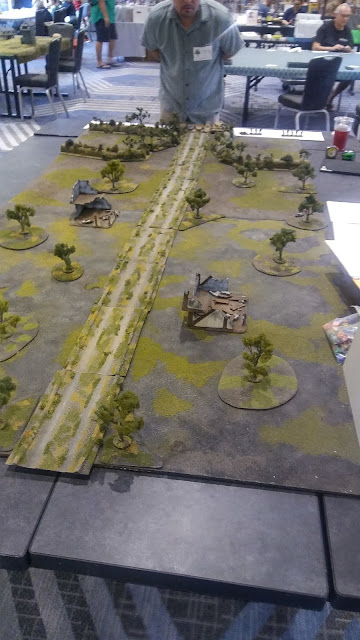 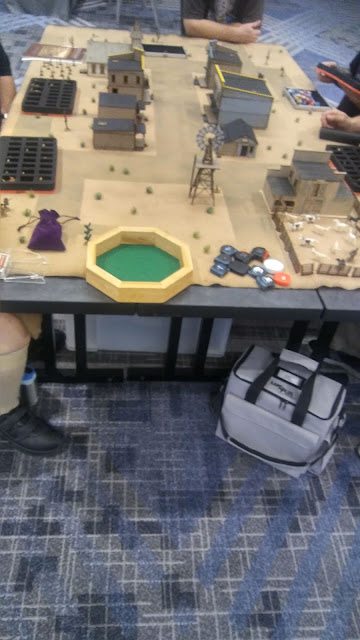 This was the smuggler scenario with four factions.   The smugglers whose objective was to meet with a local gang at the tavern and deliver the contraband to them.   The third group was a rival gang who were trying to intercept the contraband for their own purposes.  The fourth group was the local law enforcement.   I used teams from the Galactic Heroes companion book.  The smugglers were the Kreng, the Ornks were the gang they were making the delivery to, the rebels were the other group and empire were the local law. 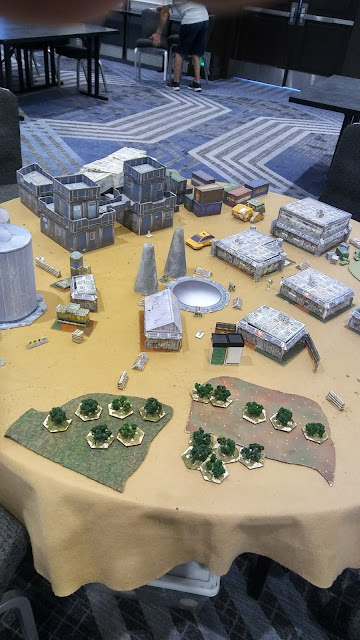 The Kreng ran into trouble early as the rebels opened fir on them putting wounds and/or shock markers on three of the five Kreng. Meanwhile the Ornks advanced through the town to the tavern.   They also came under fire from the rebels.   One of them went berserk  and charged the closest rebel.   The Ornk gang leader snuck into the tavern and waited for the contraband to arrive.   The wounded Kreng recovered and was so enraged by being wounded and seeing another team member killed that he tore the closest rebel apart in close combat,  He then attacked the next rebel and after a couple of rounds of combat tore him to pieces also.   The next turn he charged another rebel and did the same to him.   Mean while the Ornk had killed the rebel he had been fighting. 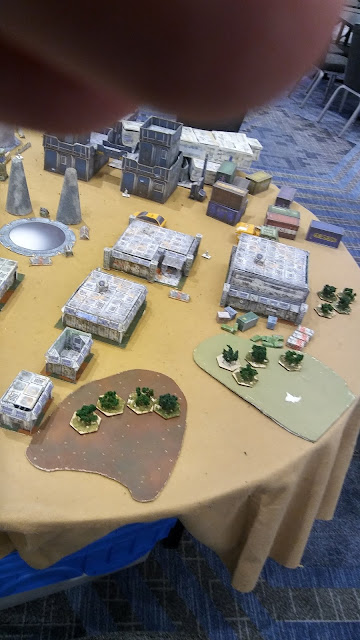 Another view of the town.  Rebels entered on the road between the lab (two story building) and the container yard.  Tavern is near the center of the picture to the left of the lab.

While all this was going on the law enforcement team had been slowly advancing towards the center of town.   One of them took out the last rebel with a long range shot.   They then headed for the tavern where they broke down the door and proceeded to open fire on the Ornk leader wounding him.  They would continue to fire at the Ornk leader for  several turns causing additional wounds and shock markers.   The Ornk leader finally succumbed to his wounds while making a recovery attempt.
The law enforcement team was plagued with faulty ammunition.   Throughout the game they would take shots at the Kreng, rebels and Ornks with almost half their shots resulting in out of ammo rolls.

While this was happening the Kreng were able to deliver the contraband to the Ornk specialist behind the tavern.    The Ornks then headed for the outskirts of town with the contraband and the Kreng returned to their ship to join the one team ember who had fled to it earlier following a failed shock recovery attempt.

The third game was set in a different location.   R. E. Howard, Inc and H. Beam Piper, Ltd.  had established a  joint mining operation n a barren moon.  Eventually they had a falling out and H. Beam Piper, Ltd had taken control of the mining operation.   R. E. Howard, Inc hired a group of mercenaries, Conan's Barbarians, to sized the mining facility.   The mercenaries had two squads of two four man fire teams each riding in an Infantry fighting vehicle equipped with a rail gun.   This was treated as a heavy laser in the rules.   The IFV's had heavy armor.   Both the mercenaries and the security force defending the mining base had light armor.

The security force had five four man teams.  Two of the teams had an Anti-tank rocket launcher and three riflemen, one team had a heavy blaster and three rifle men, and the other two teams only had four riflemen.   Both sides were armed with blaster rifles.

The mercenaries would win by eliminating the security force and/or capturing the power plant.  There was a road going through the mining base from the spaceport to the mines.  Vehicles could drive along it with no problem, but if the attempted to move off road there was a chance they could break through the ground surface and become stuck.   Infantry could move cross country without any problems. 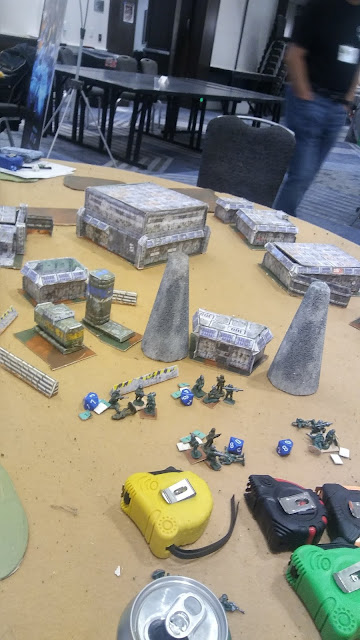 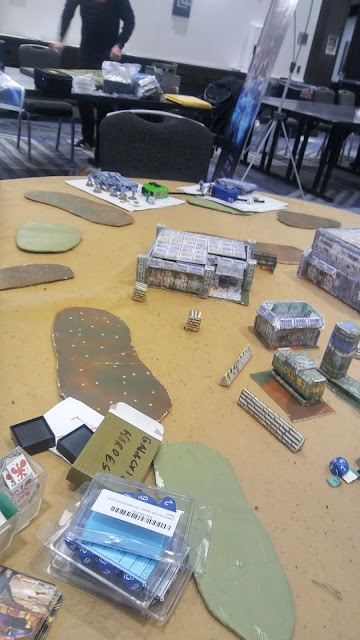 another view of the mining facility.   Conan's Barbarians in upper center of picture. 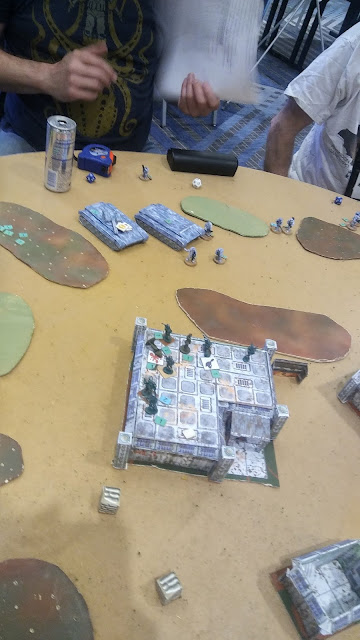 The mercenaries advance.  Security teams are actually inside the building.  The figures were moved to the roof after combat began to make it easier to keep track of who had acted.   One mercenary IFV has been disabled.  One squad is advancing along the road while the other is outside the picture on the left.  By the end of the game all the guys in the building were either out of action or wounded.