BlenHeim 1704 at the Miniature Wargaming Society of Sacramento meeting.

The MWS had their meeting on the weekend following the SBGC meeting and I again ran the battle of Blenheim.  The previous game can be found here.  Other games at the club meeting were Napoleonic naval using Form on the Admiral's Wake and DBA

The commanders on the Franco-Bavarian side were Leo as Tallard, Chris as Clerambaut, Aaron as Masim, and Greg M. as the Bavarian Elector.  On the Anglo-allied side Mike was Marlborough, Dave was Eugene, Greg was Charles Churchill and Rob was Cutts.  Both sides were allowed to position their individual units within the deployment areas of their commands.

On the eastern end of the battlefield the Bavarians east of Lutzingen advanced against Eugene's troops.  the cavalry battle there was to go back and forth with the Bavarians loosing the initial contact, but then pushing Eugene's horse back.  On the other side of the town Eugene's men overran the guns, but were eventually driven back by more Bavarian horse.  Eugene's forces would eventually become worn down.   They ended the battle keeping the Bavarians occupied and unable to aid the French.

At the other end of the battlefield the British assault against Blenheim had little success so their infantry pulled back out of musket range.  By holding position they kept the French in the town from pulling out to help in the center.

Masim's command held their position at Oberglau exchanging artillery fire with the allies.  He did send two cavalry brigades to try and help stem the advance of the allies to his right.

In the area between Blenheim and Oberglau the allies advanced engaging the French there.  The outcome of the engagements favored the allies, slowly forcing the French back.  Clerambaut committed his two cavalry brigades and the three infantry brigades to the fighting there instead of moving the infantry into Blenheim as happened historically.  One of the highlights of the fighting in the center was  the charge of one of the British cavalry brigades led by Lumley.  The charge threw back three French cavalry brigades in succession though the British were down to half strength at the end of it and Lumley had fallen early in the charge.

We were only able to complete eight of the twelve turns, but the situation was an obvious allied victory over the Franco-Bavarians as they would soon drive the French horse from the center and be able to sweep around to the rear of the Bavarians.   In addition to Lumley at least two French commanders also fell during the battle.  Five of the eight Franco-Bavarian gun batteries had been overrun and eliminated.    Blenheim had been surrounded and part of it had been set on fire from artillery fire.  Anglo allied casualties had been higher up to this point. 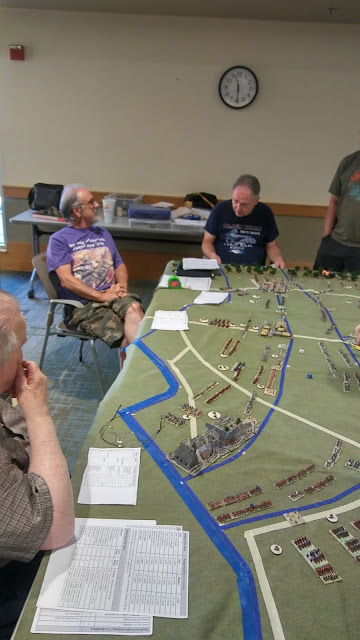 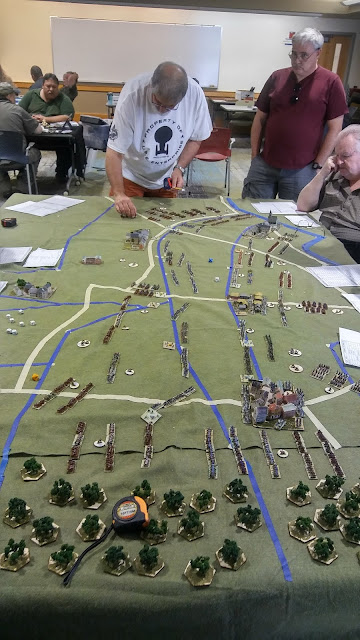 Mike in the white shirt, Chuck observing the deployment, and Chris 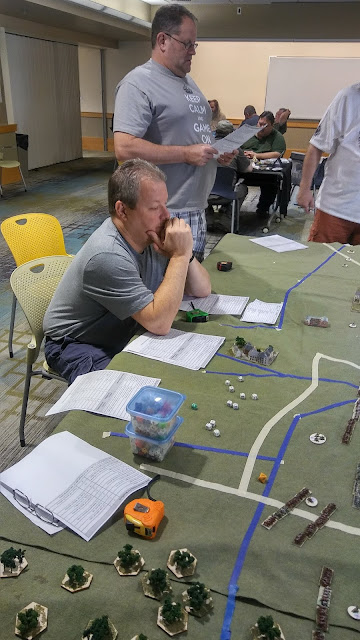 Greg in front and Rob in the back 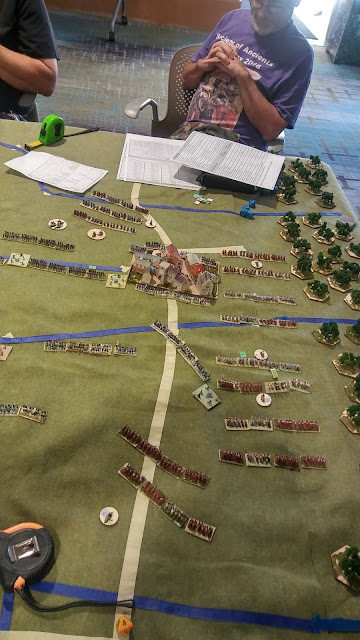 The Bavarians advance against Eugene. 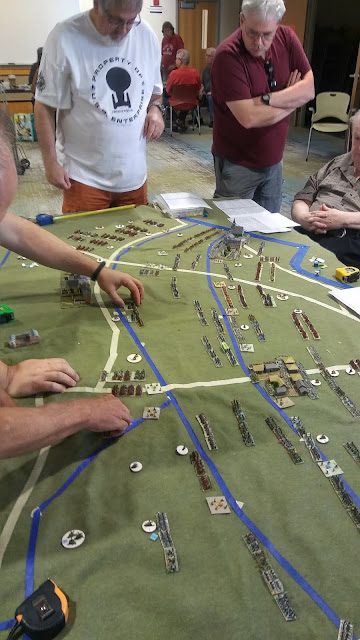 The Anglo-allies advance against the French. Mike in white shirt and Chuck observing the game. 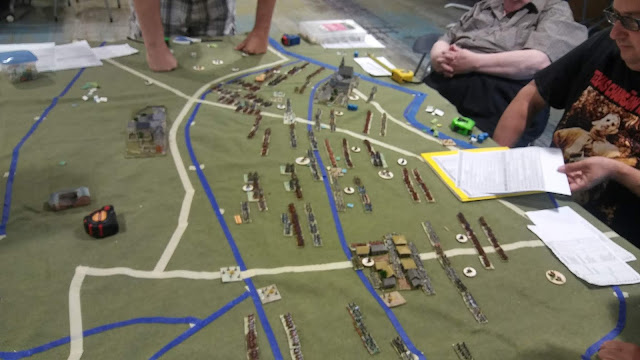 Initial Anglo-allied charges are repulsed.  Town of Oberglau near bottom center of picture. 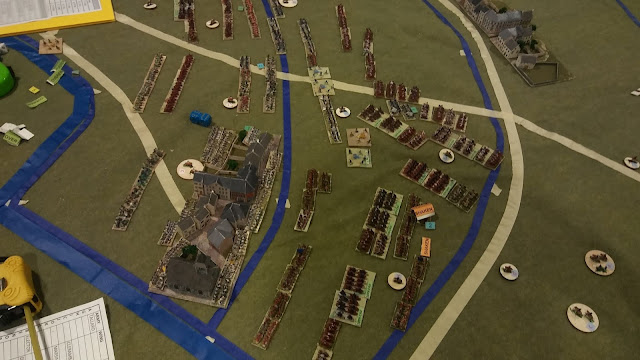 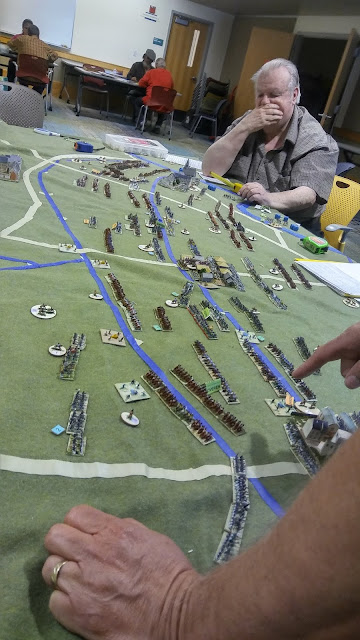 Eugene's assault against the Bavarian right. 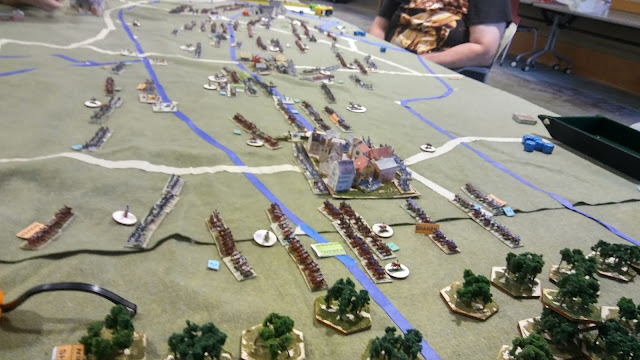 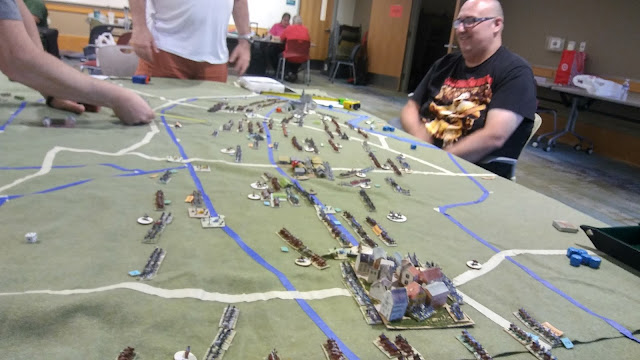 Leo watches as the Anglo-allies advane. Lumley's cavalry brigade has just finished smashing through the three French cavalry brigades just above the road going across the center of the picture. 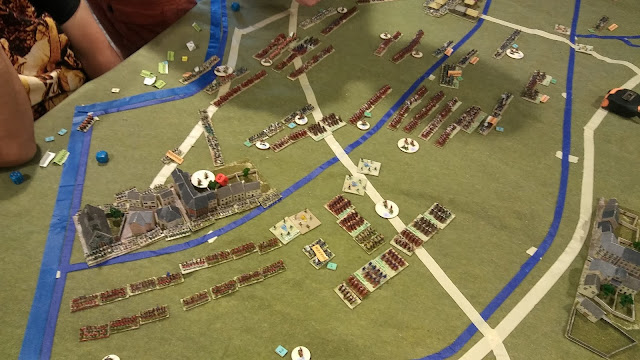 Start of turn six.   The Anglo-allied horse and infantry are about to drive the French center back and swarm across the river.   Blenheim has just been set on fire.  The French artillery batteries have been eliminated.

The Danube was unfordable.   The Nabal river had marshy banks and could not be crossed by artillery except at bridges.  Rules used were Rank and File with modifications   Artillery ranges were cut in half and musket ranges were further reduced to one inch for close range and two inches for long range..  Units were brigades with each stand being a battalion of infantry and several squadrons of horse.   Each infantry brigade represented 2000 men, cavalry were 1000 men, and each artillery unit was 12 guns.  Ground scale was 100 yards to the inch and each turn was 30 minutes.   Cavalry and infantry could pass through each other provided neither was charging, being charged, or routing and one of the units was stationary for the turn.   Linear obstacles and formation changes took 1/4 move and separation distance for charges was one inch. Each named commander was represented on the field

Forces are as follows.  The Franco-Bavarians had one veteran cavalry and one veteran infantry brigades in the brigades commanded by Tallard.   The were four veteran infantry brigades on the Anglo-Allied side.   Two of Lumley's cavalry brigades and all five of Wurtemburg-Neuenstad's cavalry brigades on the Anglo  side were the British and Danish cavalry which had a +1 die roll advantage against other cavalry.  L, M, and H under artillery are light, medium, and heavy smoothbore artillery.  There were 64 infantry figures and 48 cavalry per brigade.  (2,368 infantry, 1776 cavalry).  All figures are from Heroics and Ros.  Both armies were almost equal in overall units with the Franco-Bavarians having one more artillery unit. Each named commander was represented on the field

Posted by William Butler at 8:36 AM