This part is description of the second scenario followed by a brief description of the action in the game.  The scenario is an expedition to examine an ancient abandoned alien site, gather as much data and items as possible and leave in the spaceship they arrived in.   The others are teams from various star nations or corporations attempting to capture the expeditions scientists and any data or devices that are at the site.   The scientists may not be shot at, but may be captured if defeated in close combat by a shaken, wound, or out of action result.   If captured they each must be accompanied by a team member and move at crawl speed.
The scenario is designed for four to eight players and uses a six-foot round table or a five by six-foot rectangular table.   The spaceship starts at the center of one of the long edges of the rectangular table, any point on the edge of the round table.   The center of the metal disc is placed 40 inches in from the edge where the spaceship is located with the three buildings near the disc per the photos below.   The rest of the terrain is low hills and patches of wood that block sight and slow movement.

The teams are all from the supplement and have five members.   The spaceship crew uses the bounty hunter team minus the not-Jabba hero.  The spaceship crew will not leave the ship, but will defend it if it is attacked.  The two five-man guard teams for the expedition are the not-40K space marines.  One of the regular guards on one of the teams is replaced by three grunt scientists.   They have the following traits:  Smart, Slippery, and Lousy Shot and are armed with blaster pistols.   Combining Lousy Shot with the inaccuracy of the blaster pistol and the eight-sided die of a grunt results in the scientists not being able to shoot anything at long range and having a poor chance of hitting anything at long range.  The guards and the scientists start within the perimeter of the abandoned alien site.

The six attacking teams cannot be the not-40K marines or the bounty hunters.  The first two teams are from the birdmen and ranger teams.   The last two must have armor reducing their movement to four inches be action. The other two teams can be any other team from the supplement.

In addition to the three buildings and the central disc there are two devices at the edge of the disc on the side facing the spaceship.   Each of the buildings can be searched for data and information.   On the first attempt if an easy task is passed then one data unit is retrieved.   For a medium task pass two units are retrieved and for a hard task pass three units are retrieved.   On the second attempt a medium task pass provides one unit of data and a hard task pass provides two units of data.   For the third and final attempt one unit of data is retrieved on a hard task pass.   Each unit of data is worth five points.  The two devices next to the disc are worth 50 points each and can only be removed by making a hard task pass.   Attempts can be made as many times as needed to remove them.   Once removed each must be carried by at least one team member at a crawl.   If two carry it then one inch is added to the movement rate per action.

The game started with four players and later two additional players who were passing by joined in.   The starting attackers were the birdmen equipped with jet packs, the rangers, and a regular team starting from the middle of the east edge.   The spaceship was on the south edge of the table.   The later arriving players took the two armored teams.

While the scientists were inside the buildings attempting to retrieve as much data as possible the two team leaders were trying to remove the two devices.  One of them removed a device on the first turn and the other accomplished removing the second device on turn two.  While this was happening the raiders were advancing and starting to engage the guards.  At the end of the second turn a strange humming could be heard from the disc and suddenly a group of four demonic looking creatures appeared.

Both jokers had been included in the deck as wild cards.   If  a joker was played and there were any creatures on the table they would move in a random direction determined by an arrow die or the top corner of the result of a ten sided die roll.  This movement would take place after all cards of the type that had been called had been played.   Thus if tens were called and the first joker was played as a ten once all players had finished playing their ten cards the creatures would then move.   If the second joker was played in a turn then additional creatures would appear.   The number of creatures appearing would be determined by the difference of two averaging dice, marked 2,3,3,4,4,5 or if both were the same that number of creatures would arrive.   For a regular six-sided die count one as three and six as four.

The creatures had the following characteristics:  Close combat D10 +1, Wounds 2, Wound roll +2, Move 4 per action and +3 inches per turn.  No shaken/shock effects, Leap +2 inches, no terrain penalty for movement, +1 to break down door,
To be hit shooting +1, to be hit in combat -1, to be wounded – 1, no penalty for fighting more than one opponent or not having a close combat weapon.
When the creatures were activated on the third turn two of them charged the round domes and the other two headed off to the east attacking the guards that were there.   One of the scientists was engaged by a creature after it broke down the door immediately.  He was lucky and only suffered a shaken result.   On his turn he slipped from its clutches and ran for the spaceship.  The creature was then knocked out of action by the guard in the dome.   The other guards did not fair as well.   During the course of the game one of the creatures killed two of the guards and spent a couple of turns devouring the remains of the second guard (no jokers played during those turns).  The other scientist also packed up their gear and made a run for the ship before they could be caught by any other additional creatures.  Surprisingly the scientists did not stop to relieve the team leaders of the devices as they ran for the ship.

One of the armored teams made an alliance with the birdmen who had moved to the southwest of the site.  Together they formed a firing line that kept the two guard leaders pinned down with shaken and wound results.  While they put up a tough fight the guards kept suffering casualties as additional creatures arrived.    They were eventually down to only three of the starting nine and only one made his escape to the ship abandoning the devices.   The two teams of raiders who had partnered split the devices between them.

The rangers had made it to the site and finished investigating the buildings finding a few more data units.   Except for the one creature munching on the guard all the others had been killed.  The team advancing from the east met that creature just after it finished devouring the guard  with only one team member surviving its attack by running away.   The creature then went on to attack the other arriving armored team and was finally slain. 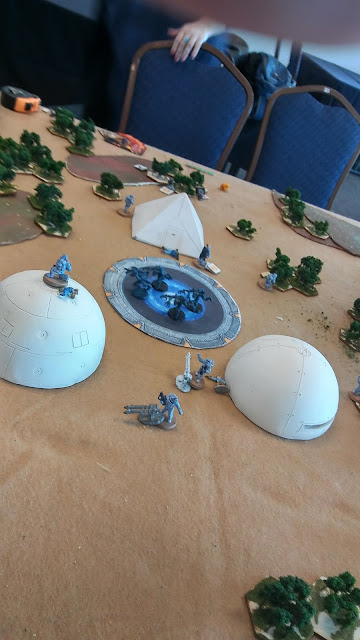 End of the second turn.  Four creatures have appeared on the portal.   The guard with one of the scientists on top of the dome is actually inside.   He managed to kill two of the creatures during the first round of combat with each of them. 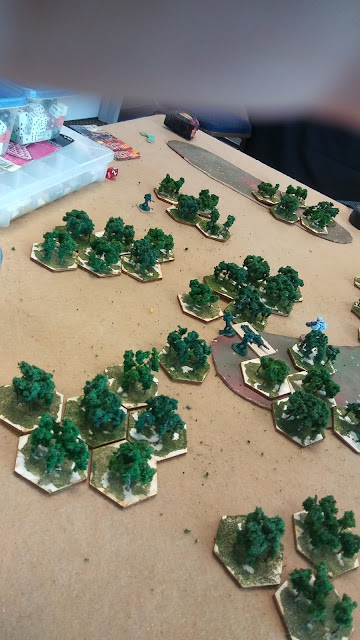 One of the guards engaging the birdmen in close combat. 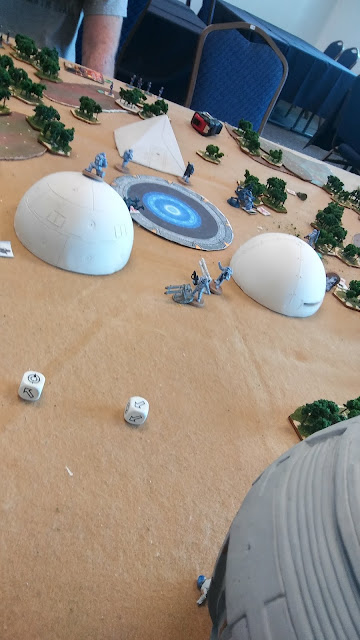 The two team leaders dragging the devices towards the spaceship at the bottom of the picture.

The first part is here
Posted by William Butler at 8:09 AM