I played this as a solo game to see how the CG300s would do against a Panthari task force.   The CG300s were designed using the Excel ship design spread sheet for StarCruiser.  The Panthari ships are based on the French ships in the game.  Other than the "ground" and time scale the rules played as written with ships defending against a missile attack firing in the fire phase and the detonation phase.   Turns were changed from 20 minutes to ten minutes and one inch is one light second.  Fleets moved in formation centered on the command ship to which all distances were measured from and to.   Due to using miniatures instead of the board game counters, ships could not be "stacked" in the same place on the game mat.  The missiles have been revised to increase their velocity to 14/15 per turn in order to make them more effective and be able to chase down the American cruisers in the game which can outrun any of the original missiles.   Sensor drones were also modified to give them reflective and radiated signatures similar to the cruisers.  From starting positions at seventy light seconds to engagement distance at less than 40 light seconds took five turns.   The following is an account of the engagement from the viewpoints of the two opposing commanders.

ADMIRAL'S LOG 0166.09.02 ADMIRAL VILM KELLARIUS COMMANDING
My squadron is now two light minutes from the opposing fleet.  It has been seven hours since we passed the FTL grav limit of the Velpare system.  All ships have oriented themselves to the planetary orbital plane.   The squadron had been on a training mission testing the new ships when we received orders to divert to the system and investigate a probable Panthari Imperium incursion into our territory.   Federation Intelligence agents had discovered a plot by Baron Rolf von Toerbach chairman of Tallamatrix Corporation to take control of several Federation systems with the backing of the Panthari Imperium.  This included establishing a secret base on the moon of the third planet of the neutral Velpare system.   Our orders were to secure the system and await the arrival of a marine brigade, which would arrive within the next 24 hours.  My command consist of the CG300 cruisers Achamandra, Calamain, Caractacalla, and Mairsus.

Our arrival had been met by a challenge from system control to which we had responded identifying our squadron and stating that we were here to investigate the local situation and secure the system.   This was met by a further challenge from Grand Duke Emanuel Folgere commanding the Panthari task force that was orbiting the planet.   The Panthari task force had left orbit and headed for our squadron.   It will be another half an hour before we are within 90 light seconds of the opposing task force at which time we will go to full battle stations.  Meanwhile the crews have been preparing our ships for combat.   The spin habitats have been locked, loose objects secured, weapons systems tested, and damage control teams readied.

PANTHARI IMPERIUM TASK FORCE CROWN PRINCE MIKHAIL, GRAND DUKE EMANUEL FOLGERE COMMANDING
A Federation cruiser squadron entered the system some time ago.  Four drive signatures were detected with a velocity of .09c.   Our response to their message was that they were invading the territory of the Panthari Imperium and that their incursion would be met with deadly force unless they withdrew.   There has been no further response from them at this time and the task force is now about two light minutes from the Federation cruisers.    The task force has the battleship Crown Prince Mikhail, the cruisers Duke Pontefract  and Duke Aivan, and the frigates Goliath, Wattiwaddle, Viktorya, and Spook.   While the task force only has a missile salvo of 12 compared to the 16 that the Federation cruisers can launch it also has six fighters and four drones.  The Federation squadron may have two drones per ship, but if they launch more than one drone per ship that will reduce the number of missile they can control.  this was followed by launching our sensor drones

ADMIRAL'S LOG CONTINUED
Our squadron is now within 90 light seconds of the Panthari task force.   They have been approaching at .03c  and four additional drives have been detected indicating that they may have launched their drones.   All ships have gone to full battle stations and we are launching our drones.   Five of them will remain with the task force while the other three will take up equal distant position ahead and to the sides of the squadron.   Velocity has been reduced to .07c  as we continue to approach the Panthari ships.   A new message has been sent to the opposing fleet informing them that they are trespassing in neutral territory, that we were investigating possible criminal activity by a Federation citizen and that any hostile act by them would be met with force.

PTFCPM
The Federation commander must be suicidal.   The latest message was a demand for us to not interfere with their mission or be met with force   This was followed by eight additional drives being detected indicating that they may have launched all eight of their sensor drones.   Three of them have moved out ahead of their squadron above and below the planetary plane.  The task force has responded by launching its drones and demanding the enemies surrender.   They have reduced their velocity to .07c indicating that they are diverting part of their power output to defenses and weapons.   In another 30 minutes we should be separated by about a light minute, at which point we will launch our fighters.   The sensor drones will not be able to get a target lock until the separation is about 30 light seconds.

ADMIRAL'S LOG CONTINUED
The Pantheri response to our message was to demand our surrender.  Two of the additional drives have a velocity exceeding .10c and most likely are sensor drones.  They are quickly approaching us.  The other two have remained with the opposing fleet.  Separation is now 70 light seconds.  I have ordered the active sensors of one of the drones with our ships to go active. 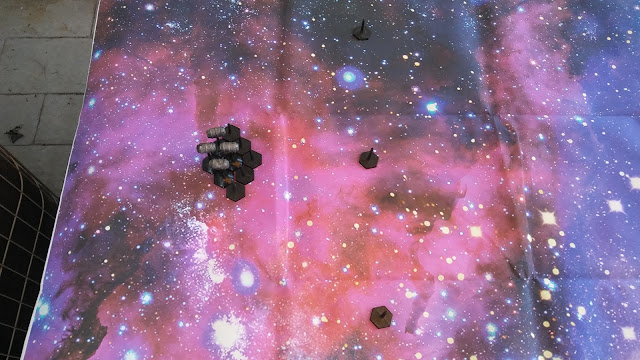 "Your Grace,  the Federation has just energized an active sensor in the main body of their fleet!   Separation is now 70 light seconds from their ships." 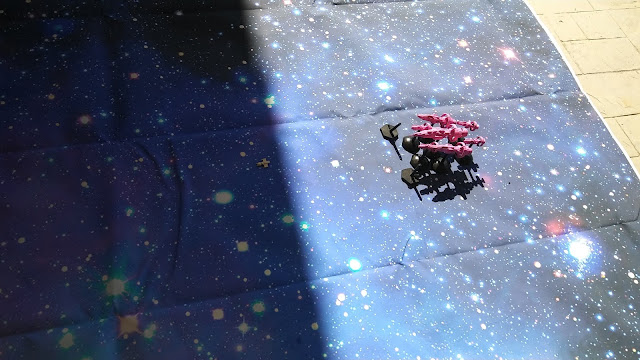 
ACHAMANCRA
"40 light seconds, sir"
"Light up the lead drones!"
"Aye, Sir...... We are getting targeting information from them now.   Bogies are one battleship, two cruisers, six unidentified."

CROWN PRINCE MIKHAIL
"Separation 40 light seconds, Your Grace."
"Energize the active sensors of the drones with the fleet.   Launch fighters."
"Your Grace, our lead drones are now within 20 light seconds of the Federation ships and are reporting target identification. Something is odd!?.  They are reporting eight Federation cruisers instead of four!  The  enemy has activated sensors on the three lead vessels."
"They must have configured their drones to appear as cruisers.   This will cause targeting problems for our missiles unless we can determine which is real and which is a decoy."

ACHAMANDRA
"30 light seconds, sir.   Our drones have identified the other bogies as four frigates, six fighter and two sensor drones in addition to the two that are maintaining a separation of 20 light seconds.  As are our lead drones which have now gone passive again."

"Continue to close and rotate ships 180 degrees.  Send  the following message 'This is your last chance to cease hostilities.  If you do not break off and acknowledge we will fire upon you'.  Prepare to launch missiles at roll over if they do not break off."

CROWN PRINCE MIKHAIL
"We still have not been able to separate the decoys from the actual ships, your Grace.  We are now 30 light seconds from the enemy.  Incoming message demanding we break off or they will fire on us."
"Tell them to go to hell" 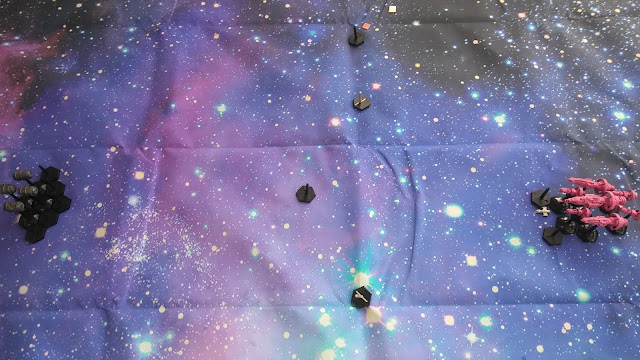 Turn 5.  Fleets are at 22 light seconds from each other.

CROWN PRINCE MIKHAIL
"The enemy ships have reduced their forward velocity to .05c  We are now within 22 light seconds of them."
"Prepare to launch missiles when we close to 20 light seconds"

ACHAMANDAR
"Sir, rotation is complete.  The enemy has closed to within 22 light seconds."
"Launch missiles and make full speed away from the Panthari ships"
"Missiles away.  Lead drones maintaining 20 light second separation.  We are increasing separation from the enemy" 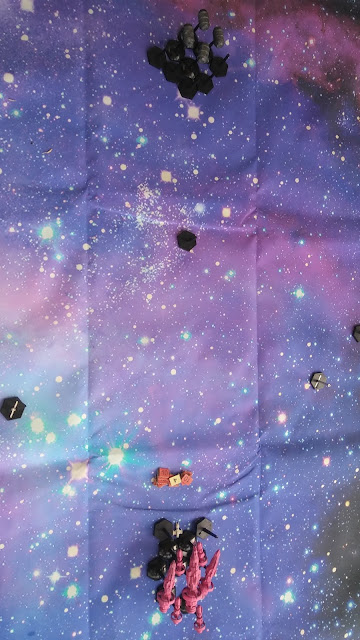 CROWN PRINCE MIKHAIL
"Your Grace,  sensors detect enemy ships moving away from us at .09c and missiles being launched.   My God!  There are 144 of them heading towards us.  Estimate time to impact is less than 15 minutes"
"That's impossible.  Power up the shields and get the lasers online.   There is no way for us to avoid them.   This might be another trick of theirs like the extra cruisers."

ACHAMANDAR
Sir, sensors confirm over 100 missile detonations.   One of the Panthari cruisers is an expanding cloud of debris.   The battleship and several of the frigates have lost power. "
"Hold position and bring all ships about 180 degrees.   Lets see what they will do"

CROWN PRINCE MIKHAIL
"Get me a damage report on all ships immediately.  How many missiles made it through our defensive fire?"
"We have 29 confirmed missile kills, your Grace.   Damage reports as follows:  Duke Aivan is destroyed, Duke Pontefract reports  both active and passive sensors damaged, major hull and computer damage   , Spook, Viktorya, and Wattiwaddle have lost power in addition to other damage.  Goliath has minor hull and computer damage We have minor hull damage, no power, computers have been destroyed,  major crew losses and ongoing system failures."
"Contact the Federation Commander and tell him we surrender.   When they accept, order our crews to abandon their ships and scuttle them?

ACHAMANDAR
"The Panthari fleet is surrendering sir."
"Accept their surrender and round up the survivors"
"Aye, Sir"
Posted by William Butler at 1:17 PM