This time the game departed from the historical account immediately.   Instead of advancing quickly to engage Pompey's army Caesar's army held its position and shifted third line to the right.  Pompey's army then spent the next three turns advancing to engage their opponents.

The extra infantry on Caesar's right helped his cavalry hold off Pompey's cavalry and light infantry.  As the infantry lines clashed Caesar joined the tenth legion to inspire them by leading them from the front.  Caesar's army was slowly winning the infantry fight.   At one point it looked like Pompey's army might collapse when a couple of cohorts were broken in the center of his line, but the other cohorts nearby held and continued the fight.

As cohorts became shaken both sides shifted them to the rear and replaced them with fresh units.  Pompey's infantry were becoming shaken at a greater rate than Caesar's when disaster struck Caesar's army.   Caesar had been leading from the front of the tenth legion for a couple of hours in game turns when he was slain.  This brought about a morale check for his entire army.  The first morale checks saw the right wing of Caesar's legions break.   At this point the game was called with Pompey the victor.

Previous games  round two
round one 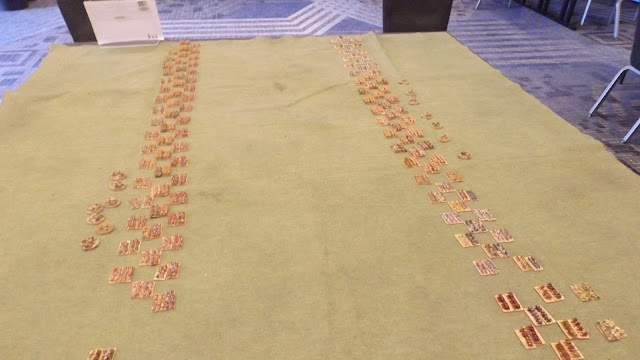 Before the start.  The river is off table at the top of the photo. 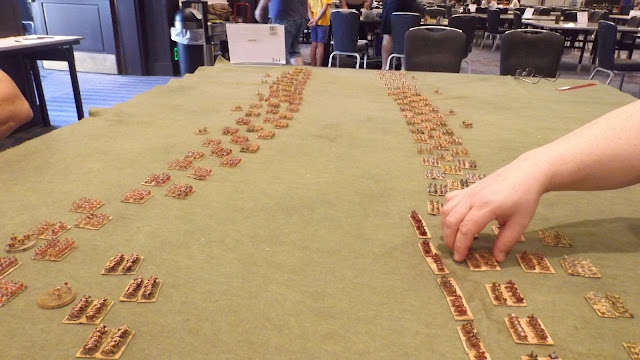 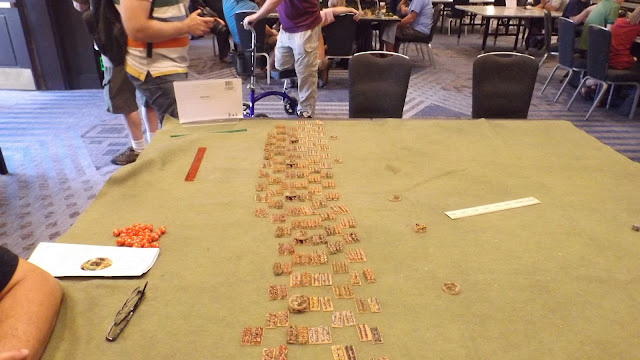 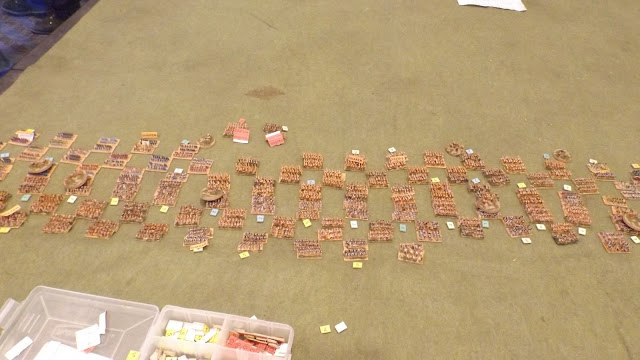 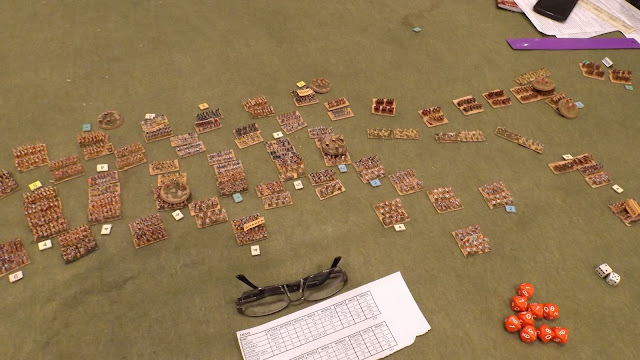 The battle on the cavalry wing.  Caesar is in the middle of the picture leading the 10th Legion.  Caesar would perish a couple of turns later.

Normally each unit would represent about 500 men.   However, Pompey deployed his infantry in 10 ranks instead of 8 and Caesar's legions were understrength and are deployed six ranks deep.    This is not actually represented on the stands.   Pompey's legion units represented about 640 men while Caesar's represented about 384.   Caesar's army was all high quality veterans while Pompey's was a mix of newly raised and a couple of veteran legions.   Pompey's men were all rated as average to reflect this.   Pompey's side also had the option of having 14 units of cavalry with half being poor and the rest average or 11 average units in a deeper than normal formation.   Once again the later version was chosen.  Extra points were paid for Caesar to give him a higher than normal morale and combat effects and to win tie die rolls for initiative each turn.   Caesar's army also had the initiative for the first turn.  His army was all rated as veteran troops with a higher morale rating.   The 10th Legion was rated as elite.